The link between diabetes and glaucoma 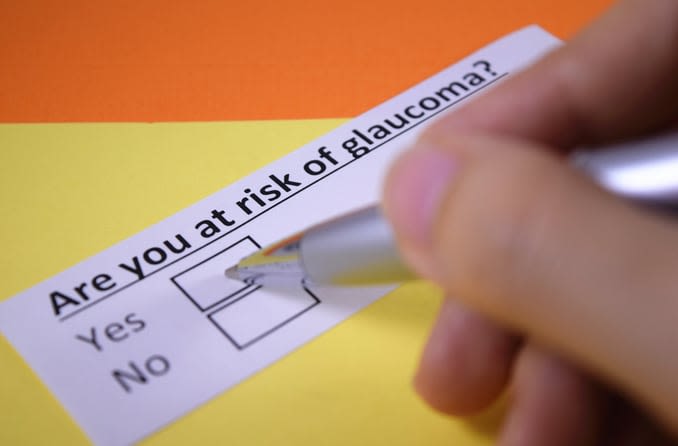 Diabetes is a risk factor for several eye diseases, including glaucoma. In particular, diabetes increases your risk of a particular type of glaucoma called neovascular glaucoma.

Just over 11% of the United States population — about 37.3 million Americans — has diabetes. The condition often develops later in life due to a poor diet and sedentary lifestyle. In fact, the number of people with diabetes increases with age: Around 26.8% of adults aged 65 or older are affected. Diabetes can also occur if there is a family history of the condition.

Those who have diabetes are at a higher risk of developing secondary health problems — especially eye conditions such as glaucoma, diabetic retinopathy, cataracts and diabetic macular edema.

How does diabetes cause glaucoma?

Neovascular glaucoma is a type of secondary glaucoma, which means it’s the result of another medical condition in the eye or the body — in this case, diabetes.

Unfortunately, these new blood vessels stimulated by VEGF are very fragile and leak easily, causing bleeding in the back of the eye (proliferative diabetic retinopathy).

VEGF released by diabetes-induced damage to the retina can also migrate to the front of the eye. When this occurs, it can stimulate the production of abnormal, fragile new blood vessels on the iris. It also can form leaky new blood vessels in the drainage angle of the eye (located at the periphery of the iris). The drainage angle is a structure that plays an important role in controlling the fluid pressure inside the eye.

These new VEGF-stimulated blood vessels in the front of the eye can clog the drainage angle, causing eye pressure to increase and eventually leading to neovascular glaucoma. In such cases, glaucoma surgery is often needed to reduce pressure inside the eye and prevent optic nerve damage and vision loss.

How likely are diabetics to develop glaucoma?

People with diabetes are twice as likely to develop glaucoma compared with non-diabetics, according to the Glaucoma Research Foundation.

How serious is glaucoma?

Glaucoma has no noticeable symptoms in its beginning stages, so it’s vital to have regular comprehensive eye exams. This gives your eye doctor a chance to catch it early and prevent complications such as vision loss and even blindness. Annual eye exams are even more crucial for diabetics, who are at a higher risk of developing glaucoma.

If diagnosed with glaucoma or ocular hypertension (higher-than-normal eye pressure, a major risk factor for glaucoma), your eye doctor may start treatment to help maintain normal eye pressure and limit vision loss. Unfortunately, any vision loss that has already resulted from glaucoma cannot be restored.

How can diabetics prevent glaucoma?

The first step to preventing an eye condition such as glaucoma is to get regular comprehensive eye exams with dilation. This is true for everyone, but especially diabetics, who are at a greater risk of developing glaucoma and other serious eye conditions.

In addition, people with diabetes can reduce their chances of developing glaucoma by maintaining good overall health. Exercising regularly, taking medications as prescribed and eating a nutritious diet make it easier to sustain healthy levels of cholesterol, blood pressure and blood sugar and help prevent glaucoma.