In fact, according to recent data from the U.S. Centers for Disease Control and Prevention (CDC), nearly 26 million Americans — roughly 8.3% of the U.S. population — have diabetes, and more than 28% of diabetics age 40 or older in the U.S. have diabetic retinopathy (DR) and related diabetic eye disease.

To make matters worse, a significant number of cases of diabetes and diabetic eye disease go undetected or untreated because people fail to have routine eye exams as recommended by their optometrist or ophthalmologist.

If you have diabetes, you should see an eye doctor near you at least annually to prevent vision loss.

Most laser and non-laser treatments for diabetic eye disease depend on the severity of the eye changes and type of vision problems you have.

Diabetic retinopathy is diabetes-related damage to the light-sensitive retina in the back of the eye. As diabetes progresses, chronic high blood sugar levels cause changes that damage the tiny blood vessels in the retina. This causes these blood vessels to leak fluid or hemorrhage (bleed). Eventually, this leads to vision problems that cannot be corrected with eyeglasses or contact lenses. 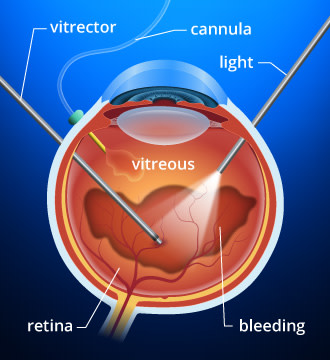 If you have a diabetic vitreous hemorrhage, you may require a vitrectomy to remove the clear, gel-like substance in your eye's interior.

Diabetic retinopathy is associated with a protein called vascular endothelial growth factor (VEGF) in the retina. VEGF stimulates the production of new blood vessels in the retina to bring more oxygen to the tissue because retinal blood circulation is inadequate due to diabetes.

Unfortunately, these tiny new blood vessels that form in the retina in response to VEGF are fragile and increase in number, leading to additional fluid leakage, bleeding and scarring in the retina that causes progressive vision loss.

Some lasers treat leaking blood vessels directly by "spot welding" and sealing the area of leakage. This process is called

Lasers also may be used to intentionally destroy tissue in the periphery of the retina that is not required for functional vision. This is done to improve blood supply to the more essential central portion of the retina to maintain eyesight.

After laser treatment of the peripheral retina, some blood flow bypasses this region and instead provides extra nourishment to the central portion of the retina. The resulting boost of nutrients and oxygen to the central retina helps maintain the health of cells in the

macula
that are essential for detailed vision and color perception. However, some peripheral vision could be lost due to this treatment.

fluorescein angiography
to provide images of the eye's interior. These images accurately guide application of laser energy, which helps "dry up" the localized swelling in the macula. A fluorescein angiogram also can identify the location of blood vessel leakage caused by proliferative diabetic retinopathy.

Laser treatment for diabetic retinopathy typically requires no overnight hospital stay, so you will be treated on an outpatient basis in a clinic or in the an doctor's office.

Your chance of preserving your remaining vision when you have PDR improves if you receive scatter laser photocoagulation as soon as possible following diagnosis.

Early treatment of PDR particularly is effective when macular edema also is present.

Injection of corticosteroids or other medications into the eye — either directly or in the form of an injectable implant — often is recommended over laser procedures for the treatment of diabetic macular edema. In some cases, a combination of drug injections and laser treatment may be recommended.

Corticosteroids have been shown to have a beneficial effect by decreasing the amount of VEGF and other inflammatory cytokines produced by cells (a process called "down-regulation"), which can lead to a reduction of diabetes-related macular edema.

According to Alimera Sciences, a significant advantage of Iluvien over other treatments for DME is the longevity of its effect. Iluvien is designed to provide a sustained release of corticosteroid medication for 36 months (three years), compared with other treatments that last only a month or two.

Clinical trials of Lucentis have shown that up to 42.5% of patients who were given monthly eye injections of the drug gained at least 15 letters in best corrected visual acuity (BCVA) on a standard eye chart two years after initiation of the treatment, compared with 15.2% of patients in a control group.

Eylea (aflibercept) is another anti-VEGF drug that is FDA-approved for the treatment of DME. It is also approved for treatment of advanced age-related macular degeneration (AMD) and macular edema following retinal vein occlusion.

Data from two studies of 862 patients revealed that eye injections of Eylea administered monthly or every two months (after five initial monthly injections) were more significantly more effective for treatment of diabetic macular edema than laser treatment. Also, patients who received Eylea treatments gained, on average, the ability to read approximately two additional lines on an eye chart, compared with almost no change in visual acuity among patients in a control group.

Retisert (Bausch + Lomb) is another intraocular implant that delivers long-term, sustained release of a corticosteroid (fluocinolone acetonide) and is used for the treatment of DME.

Retisert is designed to deliver corticosteroid therapy inside the eye for up to 2.5 years, according to Bausch + Lomb. The device is implanted into the eye through a surgical incision in the sclera.

In some people who have proliferative diabetic retinopathy, bleeding into the

If the vitreous hemorrhage fails to clear within a few weeks or months, a vitrectomy surgery may be performed to mechanically remove the hemorrhage — after which, laser photocoagulation can be applied. The laser procedure is performed either at the time of the vitrectomy or shortly thereafter.

If you experience a tractional detached retina as part of PDR and shrinking scar tissue that tugs at the retina, you usually will be scheduled promptly for a procedure to reattach the retina.

Some individuals with diabetic macular edema may experience reduced symptoms and improved vision after treatment with corticosteroid medication delivered to the eye via eye drops rather than an intraocular implant.

Research has shown that patients with diffuse DME who used Durezol corticosteroid eye drops (Alcon) four times a day for one month had reduced retinal swelling and a significant improvement in visual acuity, compared with similar DME patients who did not use the eye drops.

Remember: If you have diabetes (or are at risk of diabetes), see an eye doctor near you for an annual comprehensive eye exam, and follow your doctor's recommendations for follow-up care. Your vision depends on it!