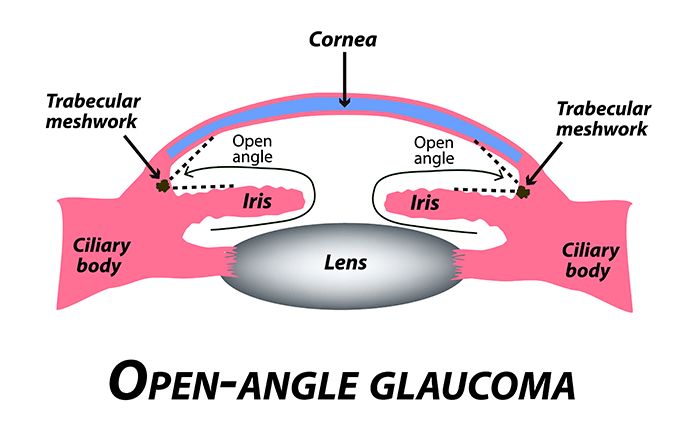 Open-angle glaucoma is a particularly dangerous eye disease because those who have it don't know anything is wrong until significant, irreparable vision loss occurs. This is because, in its early stages, primary open-angle glaucoma has no symptoms — no pain, noticeable vision loss or other hints that something is amiss, prompting some to call it the “silent thief of sight.”

Due to the sneaky nature of primary open-angle glaucoma and the devastating vision loss it can cause as it progresses, it’s essential to have regular, comprehensive eye exams. Routine exams give you a leg up on glaucoma by enabling your eye doctor to catch it during early stages before vision damage occurs.

Broadly speaking, open-angle glaucoma is caused when the pressure inside the eye —called the intraocular pressure (IOP) — is chronically too high. Over time, this high eye pressure damages the optic nerve in the back of the eye, leading to permanent vision loss. Left untreated, open-angle glaucoma can eventually cause blindness.

Pressure in the eye is controlled by a clear fluid called the aqueous humor. This fluid is produced by a structure called the ciliary body, which is located behind the iris (the colored part of the eye that surrounds the pupil).

The aqueous humor travels through the pupil into the anterior chamber of the eye (the space between the iris and the clear cornea at the front surface of the eye). It then drains from the eye’s anterior chamber through a structure called the drainage angle, which is located where the cornea and the peripheral part of the iris meet.

Inside the drainage angle, the aqueous exits the eye through a mesh-like structure called the trabecular meshwork.

In a healthy eye, the rate of aqueous fluid production by the ciliary body and the rate of outflow of aqueous at the drainage angle is well-balanced, resulting in normal eye pressure.

In an eye with primary open-angle glaucoma, the amount of aqueous exiting the eye through the trabecular meshwork in the drainage angle is less than the amount produced by the ciliary body, causing pressure in the eye to become abnormally high.

Eventually, this high IOP damages the optic nerve in the back of the eye, which transmits visual information from the eye to the brain. This nerve damage is what causes vision loss from glaucoma.

This condition is called “open-angle” glaucoma because the drainage angle of the eye remains open (unlike narrow-angle glaucoma or angle-closure glaucoma, where the drainage angle becomes reduced and shuts down). Despite the angle being open, aqueous doesn’t drain through the trabecular meshwork fast enough to maintain normal eye pressure.

Risk factors for open-angle glaucoma include:

Whether you fall under these high-risk categories or not, getting routine eye exams will make sure you’re not at risk for other forms of glaucoma, or any other conditions that put your eyes at risk.

There are several treatments for primary open-angle glaucoma, ranging from eye drops and medication to glaucoma surgery. In some cases, treatments may be combined for the best effect.

Typically, treatment for open-angle glaucoma begins with prescription eye drops designed to either reduce the production of aqueous in the eye or increase its drainage from the eye. These eye drops need to be used daily or several times a day. Since POAG is a chronic condition, you likely will need to use the drops for the rest of your life.

Sometimes oral medications are prescribed in addition to eye drops or in place of certain drops. Your eye doctor will discuss with you the advantages and reasons for the types of medications you are prescribed.

There are a number of laser procedures, microsurgeries and conventional surgical techniques that can reduce your eye pressure, reduce your dependence on eye drops and help prevent vision loss from open-angle glaucoma. The effect of some glaucoma surgeries can diminish with time, so an additional procedure may be needed after a few years.

Unfortunately, treatment for primary open-angle glaucoma cannot restore any vision that was lost or damaged along the way — another reason having routine comprehensive eye exams is so important. Your eye doctor will check your eye pressure during the exam and suggest preventive measures if you appear to be a glaucoma suspect.

Glaucoma suspects don’t necessarily have glaucoma, but often have eye pressure that’s higher than normal — a condition called ocular hypertension. In some cases, your eye doctor may recommend beginning glaucoma treatment for ocular hypertension, even if no signs of optic nerve damage or vision loss are present.

ARE YOU A GLAUCOMA SUSPECT? Schedule a comprehensive eye exam with an eye doctor near you, and find out if you’re at risk.