The cause of glaucoma generally is a failure of the eye to maintain an appropriate balance between the amount of internal (intraocular) fluid produced and the amount that drains away.

Underlying reasons for this imbalance usually relate to the type of glaucoma you have.

Just as a basketball or football requires air pressure to maintain its shape, the eyeball needs internal fluid pressure to retain its globe-like shape and ability to see.

But when something affects the ability of internal eye structures to regulate intraocular pressure (IOP), eye pressure can rise to dangerously high levels — causing glaucoma.

Unlike a ball or balloon, the eye can't relieve pressure by springing a leak and "deflating" when pressure is too high. Instead, high eye pressure just keeps building and pushing against the optic nerve until nerve fibers are permanently damaged and vision is lost. See what Glaucoma looks like through the eyes of a glaucoma patient.

When glaucoma progresses, injury to neurons ultimately leads to eye damage in the form of peripheral vision loss. However, eye damage appears to begin first in the brain as connectivity is lost.

The aqueous humor is produced behind the iris, flows into the anterior chamber through the pupil, and exits the eye between the iris and cornea. Too much aqueous production or obstruction of its outflow causes a rise in IOP that can lead to glaucoma. 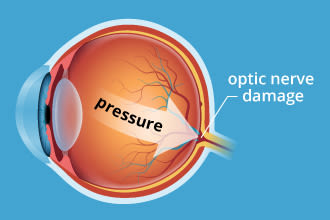 In most types of glaucoma, elevated intraocular pressure (IOP) is associated with damage to the optic nerve in the back of the eye.

This discovery reported in early 2010 is a major breakthrough that could lead to improved early diagnosis and treatments of the eye disease, according to Vanderbilt Eye Institute (VEI) researchers in Nashville.

"If you followed the disease long enough, eventually the optic nerve, then the retina, show signs of degeneration," said VEI research director David Calkins, PhD. "So the degeneration works in reverse order. It starts in the brain and works its way back to the retina..."

To understand what causes glaucoma, you first must know something about the human eye's anatomy and how intraocular fluid moves through the eye:

Anatomically, the eye's drainage angle is referred to as being either "open" or "closed" (narrow). The narrower the angle, the more difficult it is for the aqueous to flow through it.

An open angle also can hinder the outflow of aqueous, if structural damage exists within the ocular tissues of the angle itself.

While high IOP often is associated with glaucoma, this eye disease also can occur when internal eye pressure is normal (normal-tension glaucoma). People with this condition have highly pressure-sensitive optic nerves that are susceptible to irreversible damage from what ordinarily would be considered "normal" IOP.

Most conventional methods of screening for glaucoma involve testing eyes for the presence of high IOP. But because glaucoma can occur even without high IOP, direct examination of the optic nerve and visual field testing are essential in making (or ruling out) the diagnosis of glaucoma.

Though the exact cause of normal-tension glaucoma is unknown, many researchers believe decreased blood flow to the optic nerve may be a factor. This could be caused by narrowing of blood vessels that nourish the optic nerve or constrictions of these vessels (vasospasms).

Some studies also indicate that poor blood flow within the eye is associated with blind spots (scotomas) that develop within the visual field, similar to those that occur in glaucoma.*

An intriguing study reported in August 2007 indicates a potential common cause of both glaucoma and Alzheimer's, which creates brain lesions and accompanying memory loss.

Researchers in the UK who conducted the study found that buildup of a protein known as beta-amyloid in the eye's retina and in brain tissue appears to be associated with development of both glaucoma and Alzheimer's.

Increasingly, glaucoma treatments now are being investigated for their ability to protect nerve cells in the eye from damage.