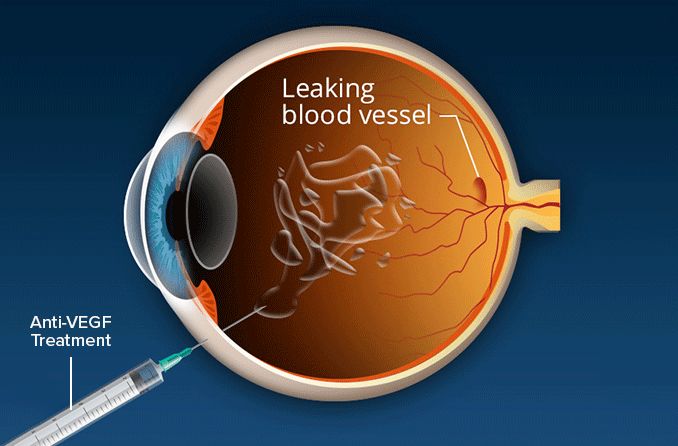 Investigational treatments for age-related macular degeneration (AMD) are therapies that are in various stages of development but have not yet been approved by the FDA for use in the United States, though they might be available in other countries.

In some cases, people in the U.S. can receive these treatments prior to FDA approval, especially if they are enrolled in a clinical trial that helps determine safety and effectiveness of the medication, surgery or other therapy.

Most investigational treatments being developed for the treatment of macular degeneration target the more advanced and visually devastating "wet" form of the disease, characterized by the formation of abnormal, leaky blood vessels in the central retina.

However, some researchers are attempting to find an effective treatment for the much more common "dry" AMD before vision is seriously affected.

Eylea and antibody combination therapy. Regeneron is a U.S.-based pharmaceutical company that makes Eylea — an established, FDA-approved medical treatment for wet AMD. Eylea is an anti-VEGF (vascular endothelial growth factor) medication that is injected into the eye to slow, stop or reverse the formation of leaky blood vessels in the central retina. 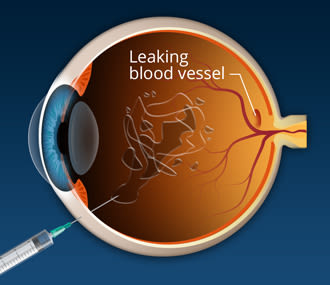 Anti-VEGF treatments for wet macular degeneration (Eylea; Lucentis) require injections into the eye every 4 to 8 weeks to reduce the risk of vision loss from leaky blood vessels in the retina.

In September 2016, Regeneron released results of a phase 2 clinical trial of a combination therapy of Eylea and rinucumab (a specific type of antibody called anti-PDGFR-beta) that was designed to see if this combination would enhance the wet AMD treatment benefits of Eylea alone.

At week 12, two of the three treatment groups in the first phase of the study were re-randomized, resulting in five total dosing groups for the second phase of the study. Outcomes for these groups will be evaluated at 28 weeks and again at 52 weeks, when the study is completed, according to the company.

Regeneron also is conducting ongoing combination studies of Eylea (aflibercept) and a different type of antibody called nesvacumab, for which the preclinical data is more supportive, according to George D. Yancopoulos, MD, PhD, the company's chief scientific officer and president of Regeneron Laboratories. Results of this combination therapy research are not yet available.

Avastin. Some eye doctors are using Avastin (bevacizumab), an FDA-approved cancer medication produced by Genentech, as an "off label" treatment for macular degeneration.

When used off label to treat AMD, Avastin is injected directly into the vitreous in the back of the eye, just like Lucentis — the FDA-approved macular degeneration drug also made by Genentech.

In a study called the Comparison of Age-Related Macular Degeneration Treatments Trials (CATT) sponsored by the National Eye Institute to compare the effectiveness of Avastin and Lucentis in the treatment of wet AMD, Avastin was found to be equivalent to Lucentis when used in similar dosing regimens. In all treatment groups in the study, at least 60 percent of patients attained visual acuity that met or exceeded the legal standard for driving vision (20/40 or better).

Some eye care practitioners choose to use Avastin off label for AMD treatment, because costs to patients can be significantly lower than when using Lucentis, which received FDA approval as a macular degeneration treatment in 2006.

Other eye doctors say Lucentis should be the preferred treatment, even though it is more expensive, because the drug has undergone clinical trials with verifiable results specifically as a macular degeneration treatment.

OHR-102. This is an investigational adjunct treatment for wet AMD being developed by Ohr Pharmaceutical.

In November 2015, the company announced the results of a phase 2 study that evaluated the effect of combining OHR-102 eye drop medication with Lucentis injections for patients with wet AMD. In patients with early wet AMD, 40 percent of patients treated with the combination of OHR-102 plus Lucentis achieved a gain of 3 or more lines of best-corrected visual acuity, compared with 26 percent of patients who received only Lucentis treatment (a 54 percent additional benefit).

Ohr Pharmaceutical currently is conducting a phase 3 study of the OHR-102 and Lucentis combination therapy on a larger group of patients to confirm its effectiveness.

MC-1101. Early studies indicate this investigational AMD drug being developed by MacuCLEAR may help prevent dry AMD from progressing to wet AMD by increasing blood flow to the choroid — the thin layer of blood vessels sandwiched between the sclera and retina that nourishes the retina.

In 2012, MacuCLEAR announced it had received funding from current investors to complete phase 3 testing of the drug therapy and that it had entered into a strategic partnership with a Pacific Rim pharmaceutical company and investor to finance clinical costs, bridging studies and regulatory development for MC-1101 in that region.

Ranibizumab PDS. Genentech is pursuing the development of a refillable port delivery system (PDS) that is implanted in the eye. The device contains ranibizumab, the same drug used in the company's injectable Lucentis.

The first-in-human results of the implant were presented in 2012 at the American Academy of Ophthalmology and future studies are planned to help determine dosage and the recommended length of time between refills.

Renexus (NT-501). Neurotech Pharmaceuticals announced promising results in a clinical study of its NT-501 intraocular implant for the treatment of retinitis pigmentosa.

The implant contains genetically modified human cells capable of secreting a nerve growth factor capable of rescuing and protecting dying photoreceptors in the retina. The company says the treatment might also be effective for the treatment of macular degeneration. A total of 184 subjects have been enrolled in three separate Phase 2 studies in the U.S.

Research increasingly has become focused on developing artificial retinas or methods of stimulating the retina for those who have experienced permanent vision loss from retinal disease. As an example, Optobionics is investigating the Artificial Silicon Retina (ASR) microchip as a way of stimulating healthy retinal cells to restore vision for those who have diseases such as retinitis pigmentosa and macular degeneration.

In what could be a milestone for treatment of dry AMD, in June 2015, Ocata Therapeutics presented results of four prospective trials to investigate the use of retinal pigment epithelial (RPE) cells derived from human embryonic stem cells for the treatment of Stargardt's disease and dry macular degeneration.

Stargardt's disease (also called Stargardt's macular dystrophy) is a form of macular degeneration that affects young people. It affects an estimated 80,000 to 100,000 people in the U.S. and Europe, and causes progressive vision loss, usually starting between the ages of 10 to 20.

All 31 patients who participated in the trials experienced improved or stable best-corrected visual acuity (BCVA).

In February 2016, Ocata Therapeutics was acquired by Japan-based Astellas Pharma, and in May 2016, its name was changed to the Astellas Institute for Regenerative Medicine (AIRM). Headquartered in Marlborough, Massachusetts, AIRM is an indirect, wholly owned subsidiary of Astellas and serves as the company's global hub for regenerative medicine and cell therapy research in ophthalmology and other therapeutic areas that have few or no available treatment options, according to Astellas.

In June 2015, another company, StemCells Inc., announced favorable results of its phase 1/2 clinical trial to evaluate the safety and preliminary effectiveness of the company's purified human neural stem cell treatment for dry AMD.

Based upon both the strength of these studies, the company initiated a Phase II study called the Radiant Study. However, further enrollment has been suspended while the company seeks a funding partner, according to the company's website.