Home Resources | Can dogs see in the dark?

Can dogs see in the dark? 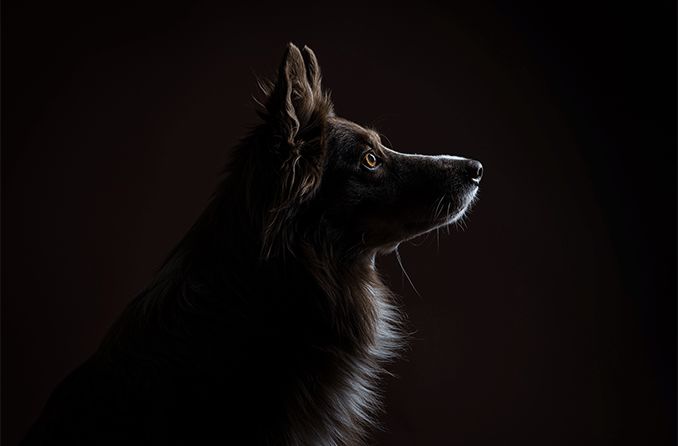 Dogs have effective night vision — it’s how they wander around the house after midnight without banging into everything. Consider it a gift from their nocturnal ancestors.

But what do we really know about dogs seeing in the dark? And how does their night vision compare to human eyesight?

How can dogs see in the dark?

Wolves’ eyes evolved to help them find prey after sunset. And, because domesticated dogs have wolves in their ancestry, they have similar vision systems.

But figuring out why dogs have good night vision is complicated. Scientists still have a lot to learn about human vision, and they know even less about canine eyesight.

For one thing, there are just so many different sizes and shapes of domesticated dogs. Our planet hosts over 340 dog breeds, according to the American Kennel Club, which officially recognizes 197 breeds.

Think about the difference in appearance between a German shepherd dog and a pug, especially their faces. Pugs have a very short snout, so there’s not much in front of their eyes to obstruct their view. The German shepherd has a much longer snout, which can influence what and how they see.

Scientists have found that the size of a dog’s nose plays a key role in its visual perception. Thus, every breed from a miniature pinscher to an Irish wolfhound (plus all the mutts in between) sees the world in its own unique way. One breed’s skull might have its eyes situated in the center of its face, while others’ eyes are set farther apart. The dog’s skull structure and eye location determine the dog’s field of view.

How well can dogs see in the dark?

One scientist suggested dogs can see in light that’s five times dimmer than what’s perceptible to people. So, how is this possible?

Dogs, like humans, have eyeballs made up of a cornea and lens that focus light onto the retina, where light-sensitive nerves send visual impulses to be interpreted by the brain.

Rods and cones are extensions of the central nervous system. They capture light impulses and transmit them over the optic nerves to the brain, which translates them into eyesight.

How can dogs see better than humans in the dark?

Dogs see better than humans at night for four primary reasons. They have:

These factors come together to give dogs much better eyesight in the dark than humans.

Something else to keep in mind if your dog spends a lot of time outdoors: They experience a phenomenon called “photo bleaching” when they come inside. It takes a dog’s eyes an hour to recover from this effect, which lasts only a half-hour in humans. If your dog seems to have a hard time navigating after coming indoors, this could be the reason.

A reminder about eye health in dogs

There’s nothing quite like the way a dog can look you in the eyes and soften your heart. Somehow, a dog’s eyes convey compassion when you’re in pain and shame when they know they’ve done something wrong.

Thus, dogs’ eyes matter to people at the most basic level of connection. This underscores why it’s important to pay attention to your dog’s eye health. In one way, dogs are just like people: They can develop eye problems like cataracts and glaucoma.

Dogs also have a special membrane sometimes called a “third eyelid” that gives their eyes an extra level of protection.

Your dog's eyes deserve the same amount of care as yours do. Next time you visit your veterinarian, take a minute to ask what you need to do to keep your dog’s vision sharp and their eyes healthy.

What do dogs (Canis familiaris) see? A review of vision in dogs and implications for cognition research. Theoretical Review. November 2017.

How well do dogs see at night? Science Daily. November 2007.

Can dogs get pink eye?

Why is my dog’s eye swollen?