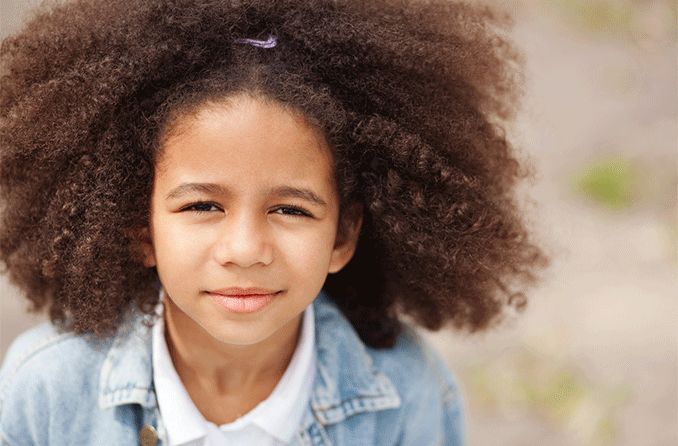 There are a few childhood vision problems that eye doctors see more often than others, including refractive errors, strabismus and amblyopia. Degrees of color blindness and convergence insufficiency are also common.

Eye exams are often recommended for young children, regardless of whether any apparent visual discomfort is noticeable or not. If your child is experiencing suspected symptoms, however, scheduling an eye exam with an eye doctor — specifically, a pediatric optometrist — helps ensure an accurate diagnosis and increases the chances that early treatment will prove beneficial.

Refractive errors are caused by the natural shape of the eye changing the way light hits the retina inside the eye. These conditions are the most common seen in childhood and adulthood, and also some of the easiest to treat. In most cases, they can be remedied with a pair of prescription glasses or contact lenses.

Symptoms of any of the following refractive errors in children can include:

A nearsighted child sees close-up objects more clearly than distant objects, which appear blurry. This happens when the shape of the eye is slightly elongated. Myopia is the most common refractive error in the world; the World Health Organization estimates approximately 2.5 billion people (and rising) are currently nearsighted.

A farsighted child sees distant objects more clearly than near objects, which look more fuzzy. This occurs when the eye’s shape is slightly shorter than normal.

A child with astigmatism will have problems seeing both near and far objects due to a slightly misshapen cornea (the clear layer in front of the pupil). Astigmatism levels are usually different in each eye, meaning glasses or contact lens prescriptions will also be different for each eye.

Astigmatism can be present alongside myopia or hyperopia.

Strabismus is a condition where one eye doesn’t align correctly with a child’s line of vision. It is usually treated with corrective lenses or surgery.

The American Association for Pediatric Ophthalmology and Strabismus estimates that around 4% of the U.S. population has some form of strabismus.

In the four main types of strabismus, one eye appears to have normal alignment while the other is misaligned:

There are multiple forms of each one of the four main strabismus classifications. They each have varying causes, symptoms and treatment.

The most common form of strabismus is accommodative esotropia, when one eye turns inward as a child focuses on an object. The inward eye will temporarily straighten when farsighted glasses are worn, but returns to pointing inward once the glasses are removed. If the child isn’t actively focusing on an object, both eyes can appear straight.

Accommodative esotropia is usually treated with glasses, and in some cases, strabismus surgery may be recommended. Sometimes, the condition goes away on its own as a child gets older.

Both eyes can be affected, but the effects are usually only seen in one eye.

When vision in one eye is weaker than the other, the brain starts to favor the stronger eye. It gradually learns to ignore visual information coming from the weaker eye, resulting in amblyopia over time.

Vision correction methods like glasses or contact lenses aren’t effective since the problem is neurological and not physical.

In some cases, amblyopia can be caused by a refractive error or strabismus. Both can cause one eye to become more difficult to use, eventually leading the brain to tune that eye out.

Amblyopia is often treated with an eye patch over the dominant eye, which forces the brain to utilize the weaker eye. Eye drops may also be used.

Early treatment is key to assuring the best outcome for this disorder. As a child gets older and gets used to favoring one eye, it becomes more difficult to reverse the way their brain processes visual information.

SEE RELATED: Are nearsightedness and lazy eye the same thing?

There are two primary kinds of color blindness, or, perhaps more accurately, color vision deficiency: red-green and blue-yellow. Both types come in multiple forms. The most common form, deuteranomaly, is a kind of red-green color blindness that causes green colors to appear more red.

Males are significantly more likely to be red-green colorblind than females. According to MedlinePlus, a service of the National Library of Medicine, red-green color vision deficiency affects about 1 in every 12 males, but only 1 in 200 females. Blue-yellow color vision deficiency is much more rare — 1 in every 10,000 people — and shows up equally across both genders.

In very rare cases, a person can be completely colorblind. This is called monochromacy.

Convergence insufficiency occurs when the eyes can’t focus properly on near objects. When a child tries to focus on something close to their eyes, one eye will turn slightly outward instead of turning inward.

Around 2% to 8% of children and young adults have some level of convergence insufficiency, according to a study published in the journal Ophthalmology.

Children with this deficiency tend to show the most discomfort with near-distance activities like using a book, computer, smartphone or TV, according to the National Eye Institute.

This can lead to difficulty reading and concentrating. For this reason, convergence insufficiency is sometimes misdiagnosed as ADHD, but it can also occur alongside ADHD.

The incidence and clinical characteristics of adult-onset convergence insufficiency.  Ophthalmology. May 2015.

Could it be ADHD or a vision problem?

How vision issues can lead to lack of focus