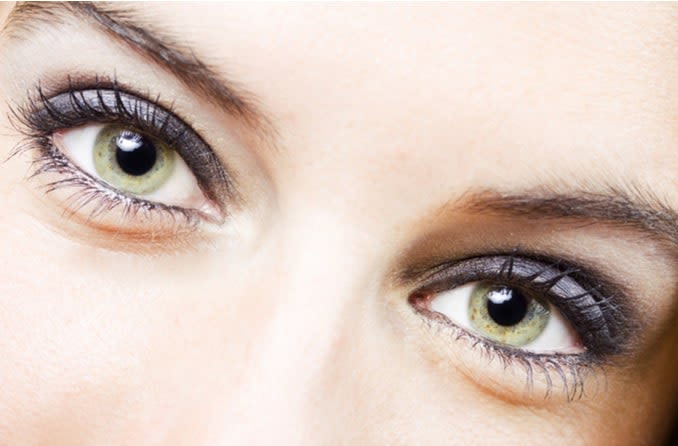 Green is the rarest eye color of the more common colors. Outside of a few exceptions, nearly everyone has eyes that are brown, blue, green or somewhere in between. Other colors like gray or hazel are less common.

Once upon a time, every human in existence had brown eyes. That certainly isn’t the case any longer. The color of our eyes tends to play a big part in our self image and, in some cases, can be a genetic throwback to your family tree. It can be hard to even imagine what you’d look like with a different eye color.

The American Academy of Ophthalmology (AAO) conducted a survey to determine the eye color percentage of people across America. The results are listed below, ordered from most rare to most common.

If you have green eyes, you’re in luck. In addition to being the rarest eye color among Americans, green eyes are the most attractive, according to 66,000 people who voted in our survey.

Surrounding each pupil, the colored portion of our eyes is called the iris. A pigment called melanin is responsible for that color — the same pigment that determines the color of our skin. And just like our skin, less melanin means lighter colors, while more melanin equals darker colors.

Every eye color — yes, even green — is actually some shade of brown, thanks to the melanin inside the iris. Light bounces off this melanin in different ways and creates a sort of optical illusion, allowing us to see vibrant greens and blues.

Iris color is determined by our parents’ eye colors mixed with a little genetic lottery. Green irises have an uncommon melanin level — less than “truly” brown eyes, but more than blue eyes. This is why green eyes are so unique.

And while 9% is indeed rare, green eyes have an even lower eye color percentage across the globe. Only 2% of the world’s population has green eyes, according to the demography resource World Atlas.

SEE RELATED: How eye color develops and why it changes

A blend of brown and green, hazel eyes represent 18% of the American population. Most of the bronze color tends to settle near the outer edge of the iris, while tiny streaks of brown, green and even gold are seen closer to the pupil.

But like green eyes, hazel eyes tend to be much rarer elsewhere in the world. As a whole, only about 5% of the global population has hazel-colored eyes.

If you or someone you know has hazel eyes, you may have noticed the eye color “changing” from time to time. This is because the hazel pigment level has a unique ability to reflect light in strange ways, giving off the perception of a shifting iris color.

If you have blue eyes, you’re related (sort of) to every other person who has blue eyes. About 10,000 years ago, someone in what is modern-day Europe was born with a genetic mutation causing permanently blue eyes. Every blue-eyed person today is a distant descendant of this one, ancient human.

About 27% of Americans have blue eyes, making it the third rarest eye color.

Eye color isn’t always reflective of heritage, but America’s large number of blue eyes can be at least partially attributed to the large number of citizens with Scandinavian, British, Irish and Eastern European backgrounds.

In the United Kingdom and Ireland, over half of all residents have blue eyes. In Finland and Sweden, that number is 80% to 90% — more than four out of every five residents.

Worldwide, however, blue eyes are much rarer. World Atlas notes that only 8% to 10% of the global population has blue eyes.

Violet eyes are even rarer, but they’re a bit misleading; someone with “violet” irises is usually sporting a special shade of blue. Light bounces off their surroundings and turns their eyes into a deceiving, yet breathtaking rendition of purple.

SEE RELATED: Is there a disease that causes purple eyes?

If you have brown eyes, you have the most common eye color found in humans.

They may not be rare, but you can take pride in knowing you’re sporting the “original” eye color — the same one early humans in modern-day Africa had, hundreds of thousands of years ago.

To this day, brown eyes are overwhelmingly dominant in Africa and Asia.

Forty-five percent of Americans, and as many as 79% of people worldwide, have some variation of brown eyes. Colors can range from a lighter chestnut to darker hues that almost seem to blend in with the pupil.

While some people may appear to have irises that are black, they don’t technically exist. People with black-colored eyes instead have very dark brown eyes that are almost indistinguishable from the pupil.

In fact, brown eyes are even the most common eye color in newborn babies. A common misconception is that most or all babies are born with blue eyes, when in reality, “blue” should be substituted with “brown.”

If you’ve been doing the math, you already know that these colors only add up to 99%. What about the other 1%?

There are a few unique colors, and combinations of colors, that make up this group: the rarest of the rare.

If you look closely, you might even spot streaks of brown, amber and gold within the gray.

Even less common is a condition called heterochromia — different colored eyes. It’s usually the result of a harmless genetic mutation, but it can also be caused by underlying disorders and injuries.

People who have albinism lack most or all melanin, giving their skin, hair and eyes a very light appearance. This often results in light blue eyes but can rarely show as pink or pale red-colored eyes, when a complete absence of melanin causes tiny blood vessels to become visible.

Of the less common eye colors, pink and red eyes are considered to be the most unique in the world, giving new meaning to the word “rare.” Only one in every 20,000 people have a form of albinism, according to the National Institutes of Health, and even fewer have red-tinted eyes.