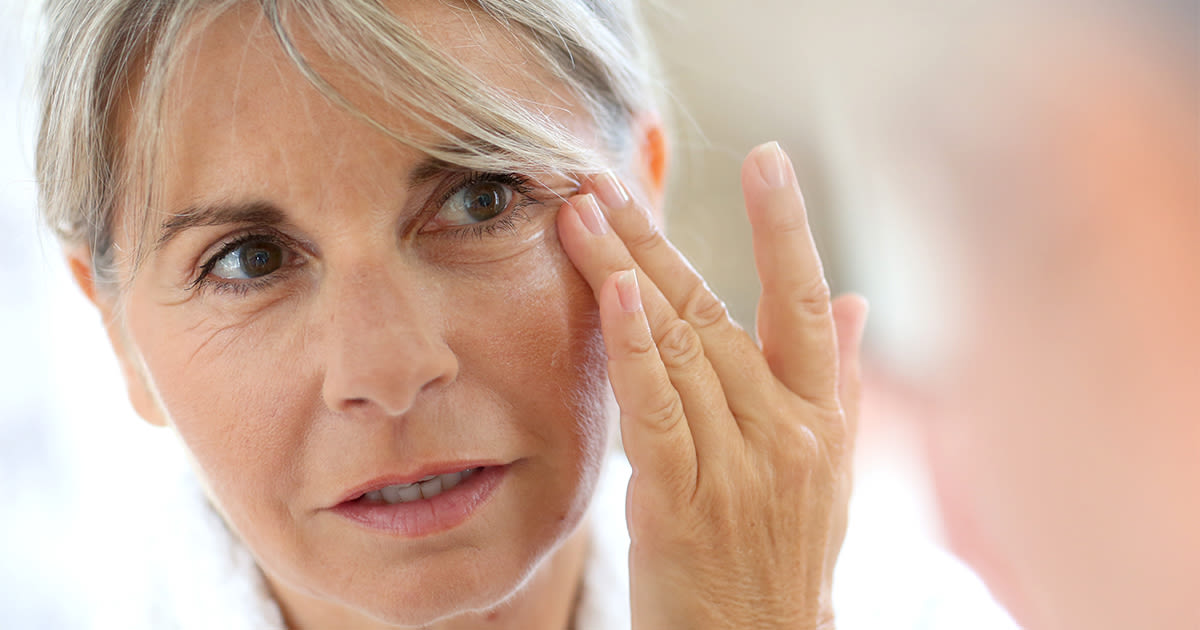 Droopy eyelids are a major reason why some people consider eyelid surgery (blepharoplasty) to remove and tighten excess eyelid skin for a more alert, youthful appearance.

Sometimes blepharoplasty also can improve your vision by providing a less obstructed field of view, once droopy eyelids are improved.

What Is Cosmetic Blepharoplasty?

Cosmetic eyelid surgery is a surgical procedure that is not medically necessary and is performed solely to improve your appearance.

Unfortunately, your upper and sometimes lower eyelids may become droopy or baggy as part of the aging process. Your eyebrows also may sag or droop as a part of the same process.

The eyelid skin stretches, muscles weaken and fat pockets become more prominent as they bulge. This may be a hereditary condition that runs in your family.

Cosmetically, such conditions may detract from the overall attractiveness of your eyes and face and cause a tired or older appearance.

A number of different types of surgeons can perform cosmetic blepharoplasty.

When Is Functional Blepharoplasty Needed?

In most cases, a functional eye lift is performed to remove loose skin from the upper eyelid if it droops low enough to impair your vision for driving or other visual tasks.

Another functional problem is difficulty wearing glasses or contact lenses, whether from baggy upper or lower eyelids.

Other medical conditions that may require functional eyelid surgery include:

As with cosmetic blepharoplasty, functional blepharoplasty most often is performed by ophthalmologists and oculoplastic surgeons.

Ptosis (TOE-sis) is the medical term for drooping of the upper eyelid — a condition that may affect one or both eyes. Ptosis that is present since birth is called congenital ptosis. Droopy eyelids in general occur when the edge of the upper eyelid (eyelid margin) falls from its normal position.

When the edge of the eyelid falls too low and covers part of the pupil, it can block the upper part of your vision. In most cases, a drooping upper eyelid results from aging of previously normal structures.

Typically, the tendon of the muscle responsible for lifting the eyelid stretches and the eyelid falls. Surgical correction of a drooping upper eyelid involves repairing the stretched tendon.

It is not uncommon for a person to develop a droopy upper eyelid following cataract surgery or other eye surgeries because manipulation of the eyelid during a procedure can cause weakening of the muscle that holds the eye open. Stroke and trauma also can cause ptosis.

Ptosis surgery most often is performed by ophthalmologists and oculoplastic surgeons.

Who Are the Best Candidates for Eyelid Surgery?

If you aren't sure that you are a candidate for blepharoplasty, schedule an appointment with your eye doctor, who can evaluate you for any medical problems related to your eyelids.

If you don't have a medical reason for a blepharoplasty procedure, you can discuss with your eye doctor any concerns or interest you might have regarding cosmetic eyelid surgery.

You might consider blepharoplasty if you have excessive drooping and sagging of skin around eyes, which often is due to normal aging. Sagging skin also can be exaggerated when you have other conditions such as puffy eyes caused by eye allergies or edema. 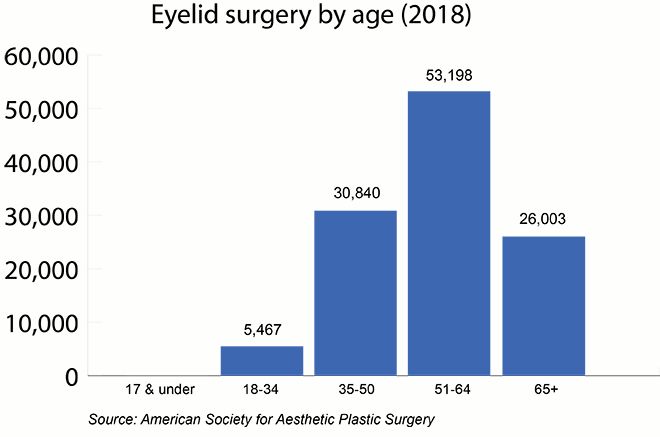 If you are interested in blepharoplasty strictly for cosmetic reasons, then your doctor likely will advise you to keep expectations realistic. While cosmetic procedures can sometimes dramatically improve appearance, they are not the ultimate Fountain of Youth.

The aging process will continue and — as with any cosmetic procedure — your improved appearance due to an eye lift will not last indefinitely. And at some point in the future, you might want to consider repeating the procedure.

However, depending on your health and other factors, a blepharoplasty can last as long as 10 years.

Your eye doctor also will evaluate you for possible surgical risk factors such as dry eye problems, thyroid eye disease and diabetes.

Keep in mind that the severity and number of any health problems might eliminate you as a candidate for blepharoplasty.

Smokers are at increased risk of surgical complications because they heal more slowly. If you are a smoker, your surgeon may advise you to quit smoking for at least several weeks prior to a procedure.

Eyelid surgery tends to be more difficult to perform on people of Asian descent because of the unique structure of this ethnic group's eyelids. For this reason, Asians might be more at risk of having less-than-optimal outcomes than other ethnic groups.

Cosmetic eyelid surgery can potentially eliminate the "absent upper eyelid crease" appearance associated with Asian facial features. This change may "Westernize" the appearance of an Asian eyelid to a certain extent. Some Asian-American patients request this change; others find it unacceptable.

Preparation for a Blepharoplasty Procedure

You'll need to clarify with your doctor whether you'll be undergoing local or general anesthesia for your eyelid surgery.

If you have local anesthesia, you will remain awake during the procedure, but the area around your eyes will be numbed with a drug administered through a needle. Local anesthesia can be enhanced with the use of systemic sedatives given either orally or intravenously.

You may require general anesthesia if the blepharoplasty is more complicated or if you plan to undergo other cosmetic procedures at the same time.

If you need general anesthesia, you will be given an intravenous (IV) injection that will put you to sleep for the duration of the procedure, which lasts from 20 minutes to two hours, depending on the complexity of the surgery and whether both upper and lower eyelids are involved.

Prior to the day of the procedure and particularly if you'll be undergoing general anesthesia, you may be asked to take steps such as these:

Procedures typically are performed in a day clinic or at the doctor's office. Ordinarily you would not need an overnight hospital stay unless you plan to have several complex cosmetic procedures that day.

What Happens During Eyelid Surgery?

Blepharoplasty can be performed on upper eyelids, lower eyelids — or both at the same time. 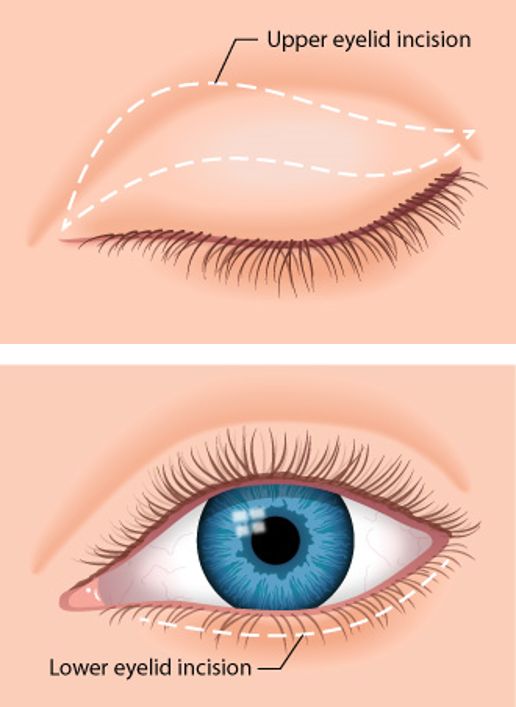 Incisions made in the upper and lower eyelid in blepharoplasty are placed so they leave no visible scars after the procedure.

During surgery, incisions are made in the natural folds of the eyelid, in the crease of the upper eyelid and just beneath the lashes or behind the lower eyelid. This way, incisions are virtually unnoticeable after they have healed.

While you are lying down during blepharoplasty, your surgeon will make precise markings to designate where excess skin and fat pads need to be removed. Some underlying muscle also may be removed.

These tissues are removed with surgical instruments such as scalpels, surgical scissors, radio-frequency cutting devices and sometimes cutting lasers. Sutures or tissue adhesives (glue) then are carefully applied to smooth and reconfigure areas around the eyebrows and eyelids.

During the procedure, your surgeon will make judgments about how much skin, muscle and/or fat to remove, based on a preoperative evaluation of factors such as your underlying facial muscle structure, bone structure and the symmetry of your eyebrows.

Dry eye patients frequently require that less tissue be removed to avoid exposing more of the eye to the air, which can cause symptoms to worsen.

Your surgeon also may use a carbon dioxide (CO2) laser to enhance the procedure by resurfacing skin and smoothing out any remaining wrinkles in the eyelid and eyebrow area.

After 48 hours, warm compresses should be applied to promote faster healing.

Your eye doctor will instruct you about what pain medication to take, if needed. Most people need only non-prescription pain relievers. Narcotics rarely are necessary.

Expect mild discomfort during the immediate recovery period. But if pain is severe or vision changes occur, call your surgeon's office immediately.

While you recover, your eye area will be bruised and red with swollen eyes, particularly during the first few days. The whites of your eyes (sclera) also may become red and bloodshot. It may take a few weeks for healing to be complete, during which time you should not wear eye makeup.

You can resume wearing contact lenses when the eyelid swelling subsides enough to allow the lenses to be comfortable. If you wear eyeglasses, you can put them on carefully at any time after surgery.

Often the sutures used for your procedure will dissolve on their own in four to seven days, and you will not need to have them removed. If non-dissolving sutures are used, then your surgeon will remove them about a week after the procedure.

Most people who undergo eyelid surgery report satisfaction and improved self image. Those whose vision was hampered by excess folds of skin often have improvements in the visual field they are able to see.

A possible complication of eyelid surgery is a temporary inability to close your eyelids completely. This means that eyes may become abnormally dry.

Usually this condition resolves after a few weeks or months, during which time you would need remedies such as eye drops, humidifiers and even taping the eyes closed at night to provide lubrication. Some surgeons will have you massage your eyelids a couple of weeks after the stitches have been removed, to soften the remaining skin and allow better closure of your eyelids.

If the condition persists beyond two or three months, an additional procedure might be required to restore enough skin to the eyelid to enable complete closure over the eye.

Other potential complications of blepharoplasty include:

As mentioned above, always call your surgeon immediately when you have symptoms such as severe pain or a change in vision following a procedure.

What Does Eyelid Surgery Cost?

Blepharoplasty cost varies, depending on the region of the country where you live, the surgeon, the surgeon's subspecialty, the facility where the surgery is performed and the extent of eyelid surgery you need.

Prices for an eye lift range from about $2,000 for a simple procedure such as addressing both upper eyelids without removing fat, to $5,000 for a more complicated one such as surgery on all four eyelids, including removal of protruding fat.

These are estimates of surgeon's fees only. Charges for an ambulatory surgery facility or in-office operating suite are additional and can range from $800 to $2,000 per procedure.

If you are undergoing a functional blepharoplasty, then Medicare or your private health insurance likely will cover a major portion of the cost of the procedure. Your insurance company may require prior authorization before you can proceed with the surgery.