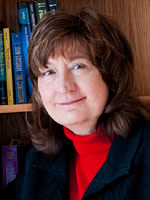 For five years Marilyn Haddrill was the editor for this website, and before that she worked on it as a freelance contributor and editor. She now writes mysteries set in her home state of New Mexico.

She worked for eight years as a correspondent and contributing editor for EyeWorld Magazine, published by the American Society of Cataract and Refractive Surgery. Her work also has appeared in publications including Eurotimes Magazine (published by the European Society of Cataract and Refractive Surgery) and Unique Opportunities (a business magazine for new physicians).

Articles she has ghost written for ophthalmologists have appeared in Ocular Surgery News and other eye care publications. She has also been the Vision editor for About.com.

Before becoming a medical writer, Marilyn worked for 25 years as a full-time and freelance writer-photographer for many news publications, including the Dallas Morning News.

Haddrill's experience as a news reporter in rural southeastern New Mexico helped inspire "Death by Snake," released in the summer of 2016.