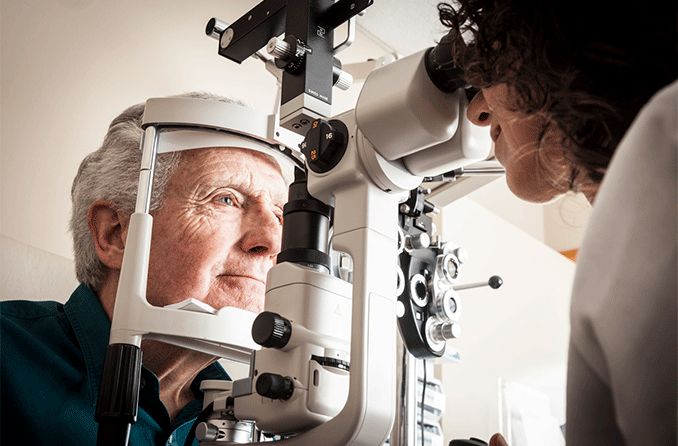 Retinoschisis is a rare eye condition that occurs when the retina (the tissue lining the back of the eye that converts light into images) is split into two layers. The condition can occur in any of the seven cellular layers of the retina. It may also occur for varying reasons.

Other names used for retinoschisis, which are given depending on the type and cause, include:

Retinoschisis does not usually lead to blindness and is treatable with the aid of corrective eyewear. However, it can sometimes lead to poor vision or further complications that require additional monitoring and care.

This type of the condition is naturally acquired in adults who are usually in their 50s, 60s and 70s, though it has been found in younger patients on some occasions.

Degenerative retinoschisis affects both men and women at the same rate.

X-linked retinoschisis is considered a rare disease, affecting only about one in 5,000 to 25,000.

There are two primary symptoms of retinoschisis, including:

These symptoms occur as the result of many eye conditions and may not indicate retinoschisis for certain. However, you should let your eye doctor know if you (or your child) experience either or both at the same time.

Children with X-linked retinoschisis may also experience symptoms such as:

How does retinoschisis affect vision?

Because retinoschisis occurs in the retina, it can affect the clarity of how you see, in either your central or peripheral vision (or both).

Additional complications may occur in some patients, including circumstances such as:

How is retinoschisis diagnosed? Your eye doctor may notice signs of retinoschisis during a comprehensive eye examination. From there, an electroretinogram (ERG) test is performed.

An electroretinogram (ERG) test may be performed to test the nerve tissue function of the retina.

During this process, special contact lenses that contain an electrode are placed on the eyes and worn as they are exposed to varying levels of light. The changes in light cause your retinas to produce electrical activity, which is monitored and measured by the electrode in the lenses.

Levels of electrical activity in the retinas determine their functionality and whether a condition such as retinoschisis may be present.

ERG tests are conducted on patients while they are awake, without anesthesia. If your child is at risk for X-linked retinoschisis, experts recommend having the test performed when they are two years old or younger, as it can be difficult for older toddlers and children.

An imaging technique called optical coherence tomography (OCT), which uses light waves to capture 3-dimensional images of the retina, may be used to assess the structure and function of the retina.

Doctors may also use OCT to monitor the progression of retinoschisis in patients and help prevent further complications.

Degenerative retinoschisis does not require treatment but should be monitored to ensure vision remains healthy.

Eyeglasses are used to correct the vision impairment that comes with retinoschisis, although they do not cure the condition itself.

Like other eye conditions, monitoring retinoschisis is an important component of treating it. See your eye doctor for annual exams, or as often as directed.

Although they both affect the retina, retinal detachment is different from retinoschisis in a few ways.

Retinal detachment is considered a medical emergency and must be treated promptly to keep vision healthy in both the short and long term. Retinoschisis, on the other hand, does not always require treatment and is not considered an emergency.

Both conditions are rare, and vision should be diligently monitored under the care of an ophthalmologist after receiving a diagnosis and/or treatment. Retinoschisis may also lead to retinal detachment, making it especially important to monitor.

The importance of eye exams

Eye exams are an important first step in discovering conditions such as retinoschisis. Additionally, visiting your eye doctor on an annual basis can help detect any other vision problems and ensure the overall health of your eyes.

Retinoschisis doesn’t usually cause blindness, but both genetic and degenerative cases can lead to vision-threatening conditions such as retinal detachment. This makes yearly eye exams that much more essential for adults as well as children.

Never hesitate to contact your eye doctor if you have concerns before your next visit — your vision will thank you.

Retina specialist: When should you see one?

Retinal detachment: Types and what to look for