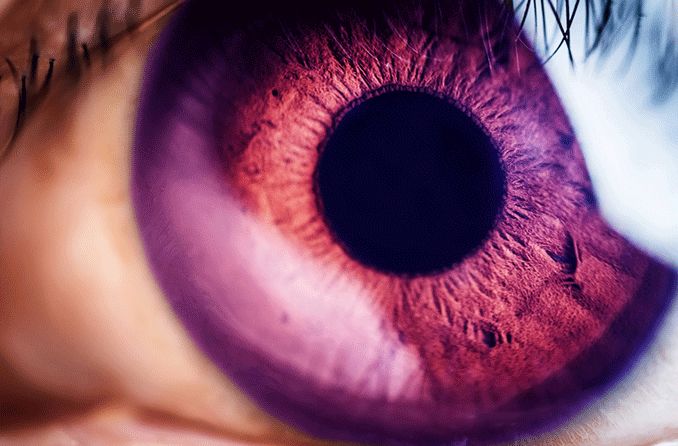 Violet is the enigma of human eye colors. Most people have eyes of brown, blue, hazel or green. Violet eyes, by contrast, are rarely seen.

There was one famous exception. The eyes of Elizabeth Taylor, the 20th century movie star, looked strikingly violet or purple in some scenes. Then again, her eyes looked dark blue in other shots.

Where does violet eye color come from?

Eye color is puzzling by nature. Did you know blue eyes aren’t really blue? The mystery only deepens when we’re talking about violet or purple eyes.

The iris, the tinted part of your eye, contains melanin, the same substance that colors your skin and your hair. The people of Kenya, for instance, have far more melanin than their counterparts in Denmark. This helps explain why most Africans have dark skin and brown eyes, while many Europeans have light skin and blue eyes.

Click to read the article and view the infographic

The irises of blue-eyed people have no blue tint. Blue, it turns out, is in the eye of the beholder. You see it for the same reason the sky looks blue. Light waves get scattered in the earth’s atmosphere and in the irises of some humans. This makes the sky and some people’s eyes appear blue.

Violet is an actual but rare eye color that is a form of blue eyes. It requires a very specific type of structure to the iris to produce the type of light scattering of melanin pigment to create the violet appearance.

Blue eyes are a recent arrival in human history. Some scientists believe all blue-eyed people trace their genetic heritage to a single mutation that happened perhaps 10,000 years ago. If so, then it’s likely that a certain celebrated cinema icon was among that ancient person’s progeny.

Born in 1932, Elizabeth Taylor was one of the biggest movie stars of the 1950s through the 1970s. Whether she was playing Cleopatra or the spouse of an oil baron, one constant ran through all of her closeups: the beguiling shade of her eyes.

Depending on the lighting, makeup, wardrobe and sets, her close-ups reveal eyes somewhere between violet and dark blue. In her Oscar-nominated role in “Cat on a Hot Tin Roof,” she co-stars with Paul Newman, famous for his piercing light-blue eyes. It’s hard to imagine a more striking contrast in eye color. (Fans of Taylor’s eyes are forgiven for wondering what her directors were thinking when they shot “Father of the Bride” and “Who’s Afraid of Virginia Woolf” in black and white.)

But what do we truly know about Taylor’s eyes? You can scan a collection of Vogue magazine pictures to see for yourself. You’ll find a wealth of tones in the dark-blue range.

The website Classic Hollywood Central quotes an Australian film critic who met her face-to-face at a film debut in 1973. “I was ushered into her presence at the official reception and found myself transfixed by her famous violet eyes. I have never seen eyes of that color before or since and I don’t believe cinemagoers were able to appreciate how remarkable they were.”

Like everybody’s eyes, Taylor’s looked different depending on the context. Blouses, scarves and mascara accentuate the dark blue or play it down. Photographers’ lighting techniques do much the same.

Whether deep blue or violet, Taylor’s eyes were unforgettable.

Violet eyes don’t have to be so rare

If you’d like to capture some of that Elizabeth Taylor eye magic, you can always order colored contact lenses. Make sure you understand the contact lens basics and the fundamentals of choosing the right lenses for your eyes and your lifestyle.

Of course, you need to see an eye doctor for an assessment of your vision before you try out any new contacts.

READ NEXT: Is there a disease that causes purple eyes?