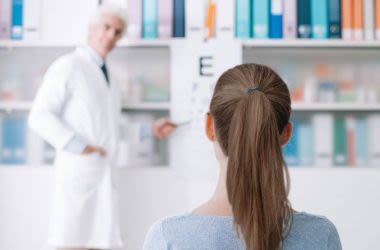 During an eye test, your eye doctor will use a chart of letters ("eye chart") to measure how well you see objects at least 20 feet (6 meters) away. This is called distance visual acuity testing.

If you haven't had an eye exam recently, click here to find an eye doctor near you.

Download a Snellen eye chart and instructions for use here.

During an eye exam, your eye doctor will ask you to find the smallest line of text letters that you can make out, and ask you to read it. If you can read the bottom row of letters, your visual acuity is very good.

The standard placement of the eye chart is on a wall that's 20 feet away from your eyes. Since many eye doctors' offices don't have rooms that are 20 feet long, in a smaller room the eye chart may hang behind the patient chair, using mirrors to make it appear in front of you at a simulated distance of 20 feet.

20/20 vision is considered "normal" vision, meaning if you can read at 20 feet the smallest letters on the eye chart that a person with normal vision should be able to read.

Eye charts can be configured in various ways, but generally, if during an eye test you can read the big E at the top but none of the letters lower than that, your visual acuity is considered to be 20/200. That means you can read at 20 feet a letter that a person with normal vision can read at a distance of 200 feet. So 20/200 visual acuity is very poor — roughly 10 times worse than normal eyesight.

In some countries, visual acuity measurements are expressed in meters rather than feet. In such cases, the normal testing distance is 6 meters, and a visual acuity result of 6/6 is comparable to visula acuity of 20/20 measured in feet.

One example is when the person having the eye test is a young child who doesn't know the alphabet or is too shy to read letters aloud. Other examples include when the person is illiterate or has a handicap that makes it impossible for him to cognitively recognize letters or read them aloud.

In these situations, a modification of the Snellen eye chart called a "tumbling E" chart may be used. The tumbling E chart has the same scale as a standard Snellen eye chart, but all characters on the chart are a capital letter "E," in different spatial orientations (rotated in increments of 90 degrees).

The eye doctor asks the person being tested to use either hand (with their fingers extended) to show which direction the "fingers" of the E are pointing: right, left, up or down.

To evaluate your near vision, your eye doctor may use a small hand-held card called a Jaeger eye chart. The Jaeger chart consists of short blocks of text in various type sizes.

The original Jaeger eye chart was developed in 1867 and contained seven paragraphs, each printed in a successively smaller font size. The smallest paragraph you can read when holding the chart approximately 14 inches away determines your near visual acuity.

Since then, there have been several modifications of the Jaeger chart (or "Jaeger card") by different manufacturers. Unfortunately, modern Jaeger charts are not standardized, and the actual letter sizes on different Jaeger cards might vary slightly.

The J1 paragraph on a Jaeger card typically is considered the near vision equivalent of 20/20 visual acuity on a distance eye chart. On some Jaeger cards, the J1+ paragraph is the 20/20 equivalent.

A Jaeger eye chart may be used in two different ways, depending on what your eye doctor is trying to measure:

Eye charts measure visual acuity only. They help your eye doctor figure out whether you need prescription eyeglasses or contact lenses for your distance vision. But good results on a visual acuity test does not guarantee your eyes are healthy.

And they don't measure items related to the health of your eyes, such as your eye pressure, whether you have glaucoma, how dry your eyes are or whether your retinas are in good shape.

So eye chart testing is just one component of a complete eye exam, which you should have every one or two years.

What to expect during an eye exam