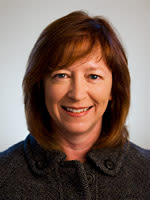 Liz has been involved in eye care journalism for 24 years. She was a consumer magazine editor when, in 1994, she left Cahners Publishing to join Eyecare Business magazine as managing editor, later serving as editor-in-chief. She was founding editor of OptiStock News, a publication with annual print and weekly electronic editions serving investors in vision care stocks.

In 1999, Liz became the founding editor of this website, and took on the role of editorial director in 2006. In 2011, industry publication Vision Monday named Liz to their annual list of the "Most Influential Women in Optical," citing her role "as a pioneer in providing online consumer education about eye care and eye health."

Liz has also produced consumer waiting-room magazines for organizations such as the Contact Lens Manufacturers Association (CLMA) and CIBA Vision.

Liz retired from All About Vision in June 2018. She continues to work on Internet projects, such as developing and maintaining websites for non-profits, including CLMA and various local community groups.