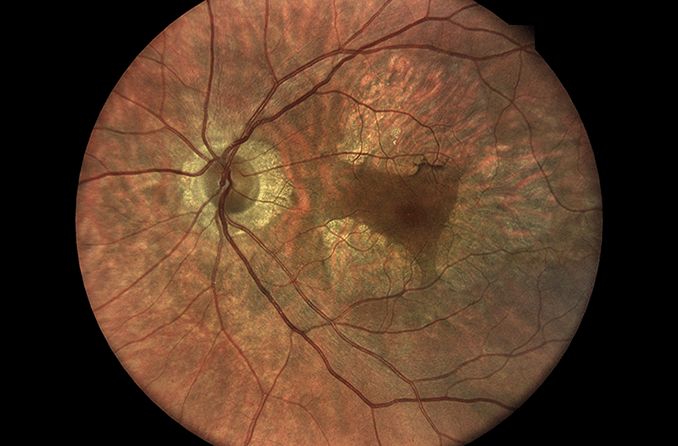 Macular dystrophy is a relatively rare eye condition. Linked to inherited genetic mutations, macular dystrophy causes deterioration of the most sensitive part of the central retina (macula), which has the highest concentration of light-sensitive cells (photoreceptors).

However, it sometimes is difficult to distinguish common macular degeneration from inherited macular dystrophy because of the similarity of symptoms, including decreased visual acuity and loss of central vision.

How Macular Dystrophy Is Diagnosed

Symptoms of macular dystrophy can include decreased visual acuity with no obvious cause, such as refractive errors or cataracts.

If your eye doctor suspects you have macular dystrophy, he or she may order special eye tests that are not part of a routine eye examination for a definitive diagnosis. For example, a test called fluorescein angiography can detect retinal damage from macular dystrophy.

A test using optical coherence tomography (OCT) also can be performed to analyze eye tissue for possible presence of a yellow-brown pigment (lipofuscin) found in the retinal pigment epithelium (RPE). Lipofuscin is waste material sloughed off from deteriorating eye tissue.

Still another option is an electroretinographic (ERG) test that involves placing an electrode on your eye's outer, clear surface (cornea) to measure how well photoreceptors in your retina respond to light.

Many forms of macular dystrophy have been identified, including:

Other types of macular dystrophy can cause specific degeneration of light-sensitive cells known as cones. The cones are responsible for color vision and are most concentrated in the macular area of the retina.

While not technically macular dystrophy, retinitis pigmentosa is an inherited photoreceptor dystrophy that destroys light-sensitive cells in the eye.

If you have macular dystrophy, you will need to visit a retinal specialist who will help you determine the exact nature of the disease. For example, some types are progressive and some aren't.

Genetic analysis and counseling may be needed to help you determine the type of macular dystrophy you have and whether the eye condition is likely to be passed on to your children and descendants. Also, you can make better decisions about family planning if you have an idea of the degree of vision loss associated with your type of macular dystrophy.

At this time, there is no proven treatment for macular dystrophy. However, gene therapy has shown promise for treating this and other types of genetic diseases.

For example, Ocata Therapeutics has presented results of several prospective trials that evaluated the use of retinal pigment epithelial (RPE) cells derived from human embryonic stem cells for the treatment of Stargardt's disease. So far, 31 patients have been treated, all of whom experienced improved or table, best-corrected visual acuity (BCVA).

Drusen in the eye