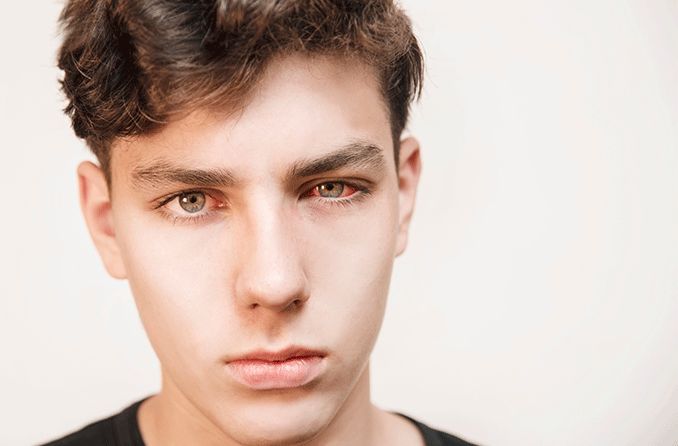 Chlamydia is a common sexually transmitted infection (STI) caused by a bacteria called Chlamydia trachomatis. Chlamydia is most common in the genital area, but it can affect eyes as well.

Symptoms of chlamydial conjunctivitis usually develop slowly. One or both eyes may be affected, though it typically only occurs in one.

Some of the main symptoms of a chlamydial eye infection include:

Chlamydia does not typically cause vision changes or notable pain in the affected eye. If you experience either of these in addition to other major symptoms, you could be experiencing a different kind of infection. The best way to determine this is through a visit to your eye doctor for an examination.

Chlamydial conjunctivitis is most often transmitted sexually, when the eye comes into direct contact with an infected person’s urinary or genital fluids.

The bacteria can be spread to the eye in other various ways, including the following:

Chlamydial conjunctivitis is diagnosed through an eye exam. Your eye doctor will also likely take a swab of your conjunctiva and send it off to be tested in a laboratory for specific bacteria.

Additionally, your doctor may recommend that you are tested for additional sexually transmitted infections or diseases, including syphilis or gonorrhea, both of which can cause infections that can spread to the eyes.

Chlamydial conjunctivitis can be treated with oral and/or topical antibiotics, such as eye drops or ointment. Most cases clear up within a few weeks, but in order for the infection to heal completely, it is critical to take the full dose of antibiotics as directed.

If you have chlamydia or chlamydial conjunctivitis, your sexual partner(s) should also be treated to prevent further spread of the infection.

Chlamydia that is left untreated can lead to further complications for the eye. The condition may also recur in those who have had it before and require treatment again in the future.

Symptoms of chlamydial conjunctivitis in newborns may include swelling, redness or watery discharge. Newborns typically begin experiencing these symptoms around 5 to 7 days after birth.

Chlamydial conjunctivitis in newborns is treated through IV antibiotics, as well as with antibiotic ointment. If the condition is left untreated in newborns, it can lead to further complications, such as lung infections and even blindness.

Trachoma is a severe eye infection caused by a bacteria called Chlamydia trachomatis — the same bacteria that causes chlamydial conjunctivitis. Though it is more prominent in developing countries, trachoma is the leading cause of infectious blindness around the world.

Trachoma infects the inner eyelid, causing it to scar. The infected and scarred eyelid then turns inward, and eyelashes begin to brush against the cornea and destroy corneal tissue. This friction essentially causes irreversible blindness.

Trachoma can be spread through contact with an infected person, through contaminated clothing or towels, or through insects such as flies that can carry the disease.

Protected sex and proper hygiene are crucial in preventing chlamydial conjunctivitis. Pregnant women who have chlamydia should receive treatment before giving birth to prevent spreading the infection to the newborn baby.

In general, it is important to practice proper hygiene to prevent infections, be they mild or severe.

Eye and vision health should also be cared for properly with annual eye exams — and do not hesitate to schedule an eye exam for any other concerns.

Are You Allergic to Your Sunglasses?