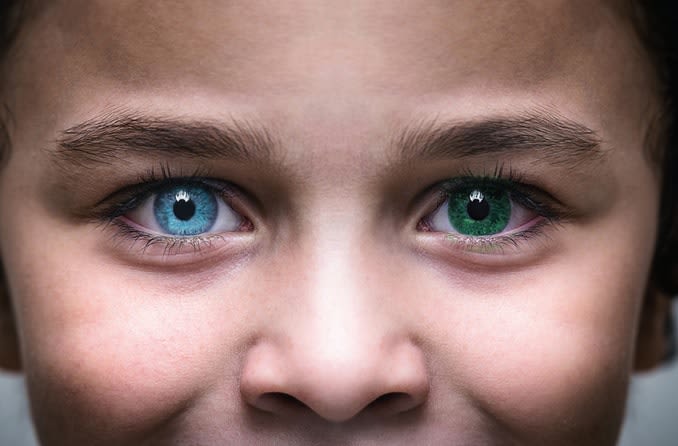 What does it mean to have two different-colored eyes?

This mutation causes at least one iris, the colored part of the eye, to develop more or less melanin, the pigment responsible for eye color. Irises that appear brown have the most melanin, while a blue or green iris has significantly less.

Heterochromia can also relate to an underlying illness, eye injury or the use of certain medication, but this is less common.

Are there different types of heterochromia?

There are three main types of heterochromia: complete, central and sectoral.

SEE RELATED: How eye color develops and why it changes

Heterochromia isn’t usually a cause for concern. Genetic heterochromia that isn’t caused by an illness or injury is harmless.

Rarely, partial heterochromia is caused by an eye nevus, also called an “eye freckle.” These are usually harmless but do come with a higher chance of developing into cancerous melanoma down the line. Much like getting your dermatologist to check spots that show up on your skin, it’s good to have your eye doctor monitor an eye nevus.

Less commonly, heterochromia can be caused by a separate illness or injury, which can be dangerous if left untreated. If you experience any level of unexpected change in eye color, make sure to have a doctor check it out.

Can you develop heterochromia, or are you born with it?

In most cases, people are born with heterochromia. Genetic heterochromia is a congenital condition, meaning that it’s present at or shortly after birth.

Heterochromia can also develop later in life, though typically only as the result of a disease, injury or the use of certain medication. For example, prostaglandins, a family of glaucoma eye drops, can permanently change eye color as a side effect of use.

Is it rare to have two different-colored eyes?

Yes, having two completely different-colored eyes is rare. Fewer than 200,000 Americans have complete heterochromia, according to the National Institutes of Health. That’s only about one out of every 1,600 people.

Heterochromia’s rarity can be chalked up to the fact that it’s a random genetic mutation — one that doesn’t occur very often.

Does heterochromia always affect both eyes?

Complete heterochromia only affects one eye, even though it may seem like both eyes are affected. In actuality, one eye is the normal color, while a pigment imbalance causes the other eye to display a different color.

Can heterochromia change the size of your pupils?

No, heterochromia does not affect pupil size. If someone with heterochromia has differently sized pupils, they have a separate condition called anisocoria. Perhaps the most famous case of anisocoria was David Bowie, whose enlarged pupil in one eye caused it to look darker than the other eye. Even so, Bowie did not have heterochromia.

Nothing. They’re just two different names for heterochromia when it affects the iris(es). Since other forms of heterochromia can affect the skin and hair, attaching iridum or iridis clarifies that only the eyes are affected.