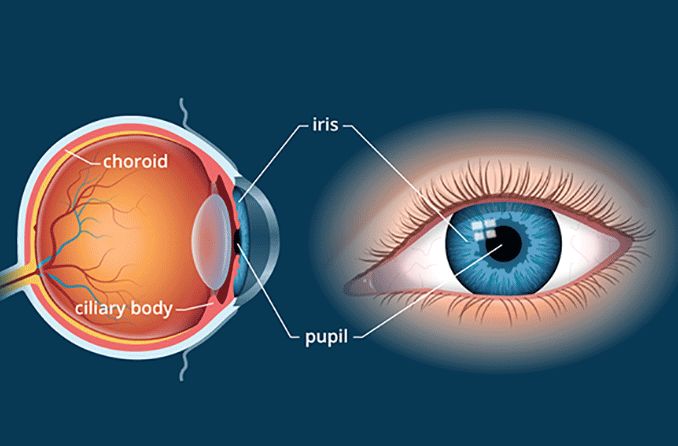 What is the choroid?

This thin layer of tissue is made up almost entirely of blood vessels. These blood vessels supply oxygen and nutrients to the outer part of the retina. In short, the choroid is the life source that keeps the retina healthy and functioning.

The choroid is part of the uvea, which also consists of the iris and the ciliary body. The iris and ciliary body are located in the front of the eye and work together to dilate and constrict the pupils.

There are four different layers of the choroid:

The eyes and clear vision depend on sufficient blood supply in order to function. Choroidal circulation accounts for 85% of blood flow within the eye, making it a vital structure to the function of your eyes.

Other important functions of the choroid include:

Conditions that may affect the choroid

Choroid eye conditions can develop sporadically, genetically or as a result of eye trauma. Each of the following conditions can be evaluated by an eye doctor, who will then determine and prescribe proper treatment:

Choroidal detachment – A “serous choroidal detachment” occurs when fluid fills between the sclera and choroid. It can occur due to injury, medications or some medical conditions, but it most typically occurs due to low pressure after eye surgery.

Choroidal rupture – A tear in the choroid, Bruch’s membrane and the retinal pigment epithelium (RPE) that result from an eye injury.

Chorioretinitis – Inflammation of the choroid caused by infection or an autoimmune disease.

Choroideremia – A hereditary, progressive deterioration of the choroid; this condition primarily affects men.

While the choroid is an important part of the eye, it’s difficult to identify any problems with it unless you have an eye exam. During a fundoscopic eye exam, your eye doctor will use a tool that allows them to view the back of the eye, where the choroid is located.

Using this method, they can determine the health of the choroid and prescribe treatment if they detect a problem.

The multifunctional choroid. Progress in Retinal and Eye Research. March 2010.

Is there any role for the choroid in glaucoma? Journal of Glaucoma. May 2016.

Choroidal detachment. The Foundation of the American Society of Retina Specialists. 2016.