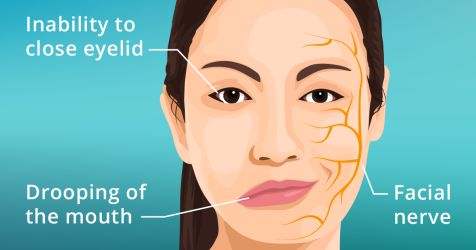 Bell's palsy is a temporary weakness or paralysis of the facial nerve known as the seventh cranial nerve. This nerve controls facial expressions, eyelid movement and the muscles of the forehead and neck.

Bell's palsy usually occurs suddenly, affecting the greater part of one side of the face. The cause often is unknown, but the condition has been associated with certain viruses such a herpes simplex and herpes zoster (shingles). Risk factors for Bell's palsy include diabetes, pregnancy and Lyme disease.

Statistics show that Bell's palsy affects about one person out of 60 or 70.

After the abrupt onset of Bell's palsy, most people develop maximum weakness within 48 hours. Prior to the onset, some people feel pain behind the ear.

While Bell's palsy may appear similar to a stroke, no other neurological signs or symptoms are present.

How does Bell's palsy affect eyes?

Because the muscle that opens the eye is controlled by a separate cranial nerve, you can easily open the affected eye. But you are unable to close the eyelid.

As a result, most people with Bell's palsy suffer from an extreme form of dry eye syndrome known as exposure keratitis.

Treatment for Bell's palsy usually includes generous use of ocular lubricants, such as non-preserved artificial tears and eye ointments. Many people require the eyelid to be patched or taped shut while sleeping, to keep it moist.

If you develop an outwardly turned eyelid, you may need surgery to repair it.

Approximately 80 percent of people with Bell's palsy recover within six months. But without proper care of the involved eye, you may suffer needless and permanent consequences such as corneal ulceration and scarring of your eye's clear front surface.