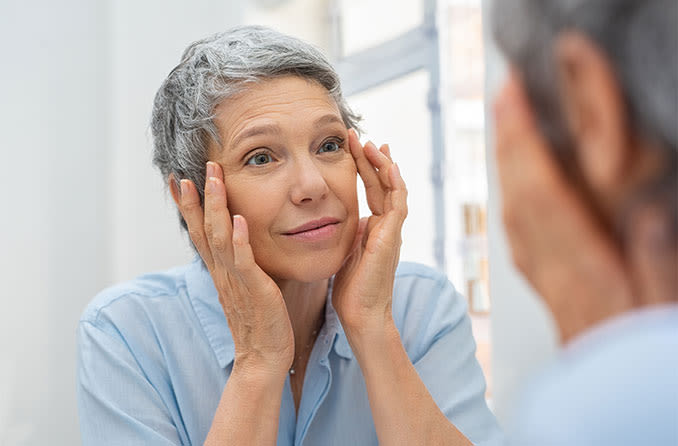 There are many circumstances that can cause an eyelid to droop — medically referred to as ptosis. While many ptosis causes are benign and no need for alarm, there are some rare cases in which a serious underlying condition is involved.

Common causes of droopy eyelids range from mild congenital ptosis to significant acquired ptosis. Read on to learn more, including how each of them lead to eyelid droopiness and when it’s best to seek medical attention.

Cases of congenital ptosis can be caused by a lack of development in the muscles that control eyelid position and movement — and, specifically, the superior tarsal muscle (also called Muller’s muscle). It’s also possible that ptosis is a symptom of an underlying condition that causes a disconnect between the brain and the eye muscles.

Blepharophimosis, ptosis and epicanthus inversus syndrome is a congenital condition caused by a genetic mutation (FOXL2) that affects eyelid development. Individuals with the condition present eyelid malformation that limits their ability to see. These malformations include:

When the affected eye(s) moves inward toward the nose, the eyeball retracts (pulls in), and the eye opening narrows, giving the appearance of ptosis.

There are three types of Duane syndrome, each categorized by which limitation you do/don’t have. The condition is a result of genetic mutation, but only 10% of cases show a familial pattern.

Marcus Gunn syndrome, or the Marcus Gunn phenomenon, is a rare congenital anomaly wherein children are born with ptosis. However, the affected eye will open wider when the child’s jaw is moved a certain way.

Known as “jaw winking,” the following actions can cause the eye to open normally:

When the jaw is returned to its normal position, the eyelid droops again.

Individuals with Marcus Gunn syndrome typically only have one eye affected, though rare cases have shown ptosis in both eyes. While the cause of this condition is unknown, researchers believe genetics may be to blame and that poor nerve connection is likely involved.

These conditions, plus many others, are possible causes for congenital ptosis.

SEE RELATED: Why does my child have a droopy eye?

What causes ptosis in adults can range from minor to life-threatening, though serious causes typically involve more symptoms than just a droopy eyelid.

Age. As we grow older, our connective tissues relax and loosen, which causes eyelids to droop. This is more prevalent and severe in older adults who frequently rub their eyes, or had a habit of eye rubbing in the past.

Lack of sleep. If you’ve gone a while without a good night’s rest and you notice your eyelids look droopy, it’s no coincidence. Lack of sleep can cause droopy eyelids because, frankly, your eyes are exhausted.

Stress. While some research finds no connection between ptosis and stress, studies from Indiana University School of Medicine report evidence of differences between ptosis caused by neurological disorders like myasthenia gravis (MG) and stress-induced ptosis.

Stress-related ptosis presents drooping in the upper eyelid and the eyebrow, and is accompanied by weakness and exhaustion. The precise explanation for how stress can lead to ptosis has yet to be determined.

Previous eye surgery. Procedures that use a speculum to keep a patient’s eyes open during surgery have been known to cause ptosis. This is due to the mechanism of the speculum to stretch the eyelids open in order for eye surgeons to have full access to the eye.

Hypothyroidism. It may come as a surprise, but thyroid problems can cause droopy eyelids. When the thyroid gland produces low levels of thyroid hormones, it can diminish facial expressions, slow speech and cause ptosis.

Individuals with hypothyroidism typically must take hormones for the rest of their lives to offset the symptoms.

When third nerve palsy is present at birth or acquired through injury, brain tumor, aneurysm, infection or other causes, it results in droopy eyelids, in addition to many other symptoms.

Stroke. A stroke is a sudden stop of blood flow to the brain that can cause facial drooping (especially on one side), muscle weakness and slurred speech.

If you have a sudden development of ptosis that is accompanied by numbness, confusion or any of the other signs listed above, you need to seek immediate medical attention. A stroke is a life-threatening emergency that can cause irreversible damage if left untreated.

Noticing the onset of ptosis development, whether due to age or other circumstances, marks a good time to schedule an appointment with your eye doctor. An eye care professional will be able to assess your droopy eyelid and determine whether the occurrence is natural or requires further testing, as well as discuss treatment options.

How is ptosis treated?