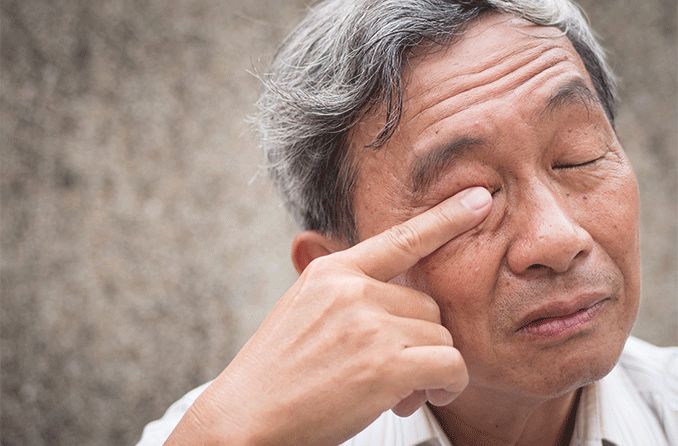 Many different types of parasites and worms can infect the eyes. Eye worm infections, which are uncommon in the US, are caused when larva or adult worms enter your eyes. The condition can often be treated with topical eye drops or oral medications but sometimes surgical removal is required.

What are the symptoms of eye worms in humans?

Not all eye worm infections cause symptoms. But when symptoms are present, they include:

These symptoms are either direct damage from the infection, and/or damage from your immune system’s response to the parasites.

How can you get worms in your eyes?

If you travel to tropical and subtropical regions, you may be more likely to get eye parasites. These infections are more common in certain areas such as Africa, India, Southeast Asia, South America and Central America.

Eye floaters are not worms

Sometimes you may notice specks, flecks, cobwebs and semi-transparent wormlike squiggles in your field of vision. These are not worms.

They’re called floaters — bits of tissue floating in the clear, gel-like vitreous chamber of your eye. Floaters are common and they’re usually harmless.

However, if you experience a sudden shower of floaters, see your doctor. A dramatic increase in floaters can be a sign of a more serious condition.

What infections are caused by parasitic eye worms?

Here are some of the more common eye worm infections:

Acanthamoeba keratitis is caused by a protozoa and is usually found in water. On rare occasions it can infect the eye and harm vision. The cornea can become inflamed (keratitis) or ulcerated, and the eyes can be red with pain, blurry vision and sensitivity to light. Contact lens hygiene is very important in minimizing the risk of acanthamoeba keratitis.

Loiasis, also called African eye worm, is caused by the parasitic worm Loa loa found commonly in Africa. Loiasis spreads when an infected fly bites and infects a human, and the larvae grow and migrate to different tissues in the body. Adult worms and larvae can cause symptoms such as eye pain, blurry vision, sensitivity to light and even difficulty moving the eye.

Onchocerciasis, also called river blindness, is due to an infection by a parasitic Onchocerca volvulus worm. The Global Burden of Disease released a study in 2017 that estimated at least 20.9 million people are infected with onchocerciasis worldwide. This worm is common in the Middle East, Africa, Central America and South America.

River blindness spreads when an infected blackfly bites a human and the larvae burrow into the skin and migrate to different tissues. In the eyes, they can actually cause blindness. Treatment includes the anti-parasite medication ivermectin and the antibiotic doxycycline.

Toxocariasis is an infection caused by roundworms that live in the gut of dogs (Toxocara canis) and cats (Toxocara cati). The feces of the animals can deposit the roundworms in the soil, and people can acquire them by mistakenly eating the worms’ eggs from contaminated soil. Though it’s very rare, these worms can infect the eye, and if left untreated, such an infection can lead to blindness.

Ocular cysticercosis is caused by Cysticercus cellulosae, the larvae of the pork tapeworm (Taenia solium). Most common in India and Southeast Asia, you can get it by eating infected pork that isn’t fully cooked. The larvae escape from your gut to your bloodstream then make their way to your eyes. Once your eyes are infected, you may actually be able to see the larvae there. In severe cases, this can lead to eye conditions such as glaucoma.

Gnathostomiasis is caused by a parasitic worm found in some areas of Asia, Africa, South America and Central America. It can infect humans who eat meat, fish or reptiles that are not fully cooked. It can move from the digestive system into the eyes, where it can cause partial or total blindness.

Toxoplasmosis is caused by a protozoa that is found in feces, especially of cats. If the parasite infects the eyes (ocular toxoplasmosis), it can lead to inflammation, scarring and vision loss.

There are many other parasites out there, including Thelazia gulosa, but they very rarely infect the eyes. One case of tapeworm infection of the eye was reported in a man consuming undercooked pork. In a case of Thelazia gulosa infection, a 26-year old woman reported that 14 worms had to be surgically removed from her eye.

How do you treat worms in the eye?

Oral or topical medications can treat worms and parasites in the eye. Some of those medications include ivermectin, pyrimethamine, and diethylcarbamazine. Antibiotics may also be given. In some cases, such as river blindness, the worms can be physically removed from the eye.

How do I prevent parasitic eye worms?

To reduce your risk of eye worms, you should:

Some eye worms are contagious. Poor hygiene is a risk factor, as is contact with human and animal feces. Keep clean, wash your hands and be particularly careful when you travel.

Eye worms: What they look like & how they are removed. N Vision Centers. July 2021.

About parasites. Centers for Disease Control and Prevention. September 2020.

Case report: Conjunctival infestation with Thelazia gulosa: A novel agent of human Thelaziasis in the United States. The American Journal of Tropical Hygiene and Medicine. February 2018.