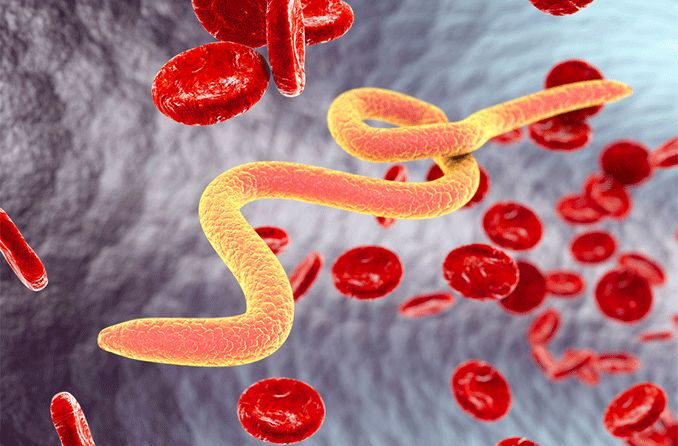 Onchocerciasis (pronounced “on·​ko·​ser·​kai·​a·​sis”), is a disease caused by a parasitic worm called Onchocerca volvulus. The parasite is transmitted through bites from Simulium blackflies, which are known to live and breed near fast-flowing streams and rivers.

Those who are consistently bitten by infected flies may develop an itchy skin rash, sight-threatening eye disease and/or nodules beneath the skin. Treatment for the condition includes persistent administration of ivermectin and doxycycline until symptoms are no longer present.

What is river blindness?

The name “river blindness” — a common moniker for onchocerciasis — is a combination of the breeding place (typically a river or fast-flowing stream) of the flies that transmit the infection and a symptom of the disease (vision loss or blindness).

Incidents of river blindness tend to occur in tropical climates, with a majority of cases occurring in sub-Saharan African countries. A study released by The Global Burden of Disease in 2017 estimated that at least 20.9 million people are infected with onchocerciasis worldwide.

It usually takes several fly bites to become infected with a river blindness parasite. Those affected typically work or live in remote areas near rivers where the Simulium blackflies breed.

Onchocerciasis is transmitted when a female blackfly infected with the parasitic worm (Onchocerca volvulus) bites a human host.

Baby worms (called larvae or microfilariae) are passed through the blackfly’s bite. Once transmitted, the larvae migrate to the skin and eyes, among other organs. The larvae use these locations to settle and mature into adult worms over 6 to 12 months.

Adult worms may live for 10 to 15 years, producing millions of microfilariae during their lifetime.

If an uninfected female blackfly bites a person who is infected with the parasite, the fly will become infected by ingesting the larvae in the infected person’s blood. The larvae will then grow and develop in the blackfly, which can then transmit the larvae to another human host.

River blindness symptoms affect the eyes and skin and fluctuate depending on where the parasites are in their life cycle. Symptoms commonly associated with the condition include:

It’s possible that symptoms won’t appear until microfilariae begin to die. However, the longer the infection, the worse symptoms may become. In extreme, prolonged cases, blindness is the ultimate result.

It’s very uncommon for casual tourists to become infected with onchocerciasis, as multiple and frequent bites are usually required before the infection is transmitted to a human.

However, if any of the below characteristics apply to you, you may be at a higher risk of contracting river blindness:

Those who visit for extended stays in high-risk areas are also at a higher risk of becoming infected. This includes field researchers, missionaries, Peace Corps volunteers and other long-term tourists.

Tourists who have been bitten several times by an infected female blackfly but have not had prolonged exposure can develop what’s considered a “light infection.” This is typically more difficult to diagnose than cases identified in infected residents.

River blindness can be diagnosed in several ways:

River blindness treatment consists of a drug called ivermectin. Ivermectin is an anti-parasitic drug that can be taken orally or applied topically. For people infected with onchocerciasis, ivermectin should be administered every 6 to 12 months for the life cycle of an adult worm — about 10-15 years.

Ivermectin effectively kills the larvae but does not affect adult worms. Many physicians suggest having any nodules on the skin surgically removed, which eliminates the visible adult worms that may continue reproducing larvae over time.

For adult worms that are not visible, doxycycline is an effective antibiotic that kills the bacteria inside of adult worms and microfilariae. Doxycycline is typically prescribed in six-week doses to treat river blindness and help stop or slow its spread.

If you’ve spent an extended period in a high-risk area and begin to notice changes in your skin and/or vision, it’s important to seek prompt medical attention.

As mentioned previously, it’s rare for casual tourists to become infected, as prolonged exposure is usually a factor in those who’ve contracted river blindness. However, if you’re exhibiting symptoms and are concerned you may be infected, a medical professional can help.

A doctor will perform the necessary tests and either put your suspicions to rest or confirm a diagnosis and establish thorough and effective treatment.

How to treat an eyelid infection