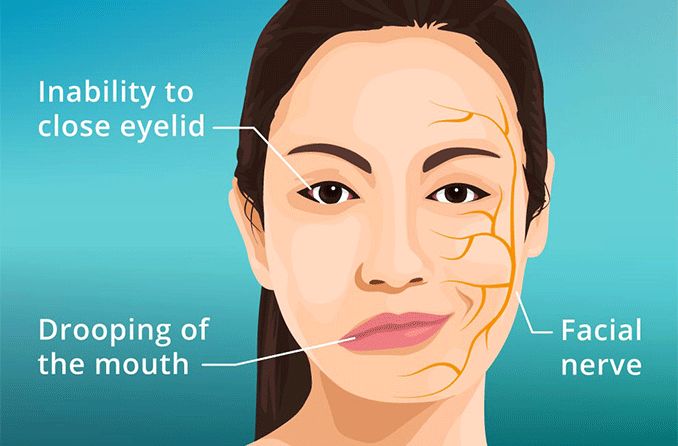 What is Bell’s palsy?

The facial nerve extends from the base of the brain to the side of the face, where its fibers branch out and control the muscles of facial expression. Eyelid and forehead movement is also controlled by the facial nerve, as well as taste sensations in certain areas of the tongue.

As a result of the facial nerve paralysis, one side of the face may become stiff or droopy, which is most noticeable when trying to smile. Difficulty closing the eye or raising the eyebrow on the affected side is also common.

Symptoms of Bell’s palsy typically show up suddenly and without warning. Though symptoms range in severity and duration, most cases improve and resolve after a few weeks.

Around 40,000 people in the U.S. experience symptoms of facial palsy every year, with cases being more prevalent between the ages of 15 and 60. The condition affects men and women, as well as various ethnicities, equally.

The name “Bell’s palsy” stems from Charles Bell, a Scottish neurologist who first identified and reported the condition, and palsy, which means paralysis.

Additional facial palsy symptoms may include:

If other stroke-like symptoms accompany your facial droopiness, such as slurred speech, blurred vision and arm weakness, you need to call 911 immediately.

Bell’s palsy symptoms are usually temporary, with many people seeing a significant improvement within three weeks and 85% of people recovering completely within a few months.

SEE RELATED: Is eye twitching a sign of a stroke?

While the exact cause of Bell’s palsy is unknown, swelling and inflammation of cranial nerve 7 (facial nerve) are usually present in people with symptoms.

Many medical professionals think a viral infection causes the body’s immune system to start targeting the facial nerve, resulting in inflammation and swelling. Viral infections that have been linked to Bell’s palsy symptoms include:

Cases of facial palsy may also be caused by injury or exposure to dangerous chemicals including dichloromethane.

People who are at a higher risk of developing facial palsy include:

Several preexisting conditions raise a person’s likelihood of facial paralysis, such as:

There are no specific tests to diagnose Bell’s palsy. It can usually be diagnosed with a physical examination, meaning the doctor can determine a diagnosis by evaluating your physical appearance.

During an exam, your doctor will have you perform different facial tasks, such as smiling, whistling, raising the eyebrows and closing the eyes. While you perform these tasks, the doctor will watch your facial muscles to see if one side is weaker than the other.

To rule out a medical emergency — such as a stroke — your mobility, alertness, speech and other details may be examined.

Preexisting conditions may also be tested to ensure facial palsy is not a symptom of something more serious, including Lyme disease, brain tumor or diabetes. The tests used to accomplish this include:

Symptoms of Bell’s palsy often improve over time without treatment. While facial muscle strength should return to normal after a few months, there are a few things you can do to aid in your recovery, such as:

If you prefer alternative medicine as a means of Bell’s palsy treatment, you may consider:

While facial palsy may be a frightening experience, your nerve function will likely return over time. In fact, 85% of people with symptoms of Bell’s palsy will recover within a few months, with children having the highest chance of making a complete recovery.

With this in mind, it’s important to know that the possibility of a full and quick recovery depends on the severity of symptoms and the level of nerve damage. Those who experience complete muscle paralysis will likely have a longer recovery period.

The most common complication of Bell’s palsy has a direct effect on your vision. It’s usually difficult to fully close the eye on the affected side of the face, which can cause the eye to dry out. Excessive dryness in the eye can lead to infection or corneal ulcers, which can threaten your eyesight.

For this reason, it’s important to keep the eye hydrated at night or while looking at a digital screen. Some ways to accomplish this are to use eye drops during the day and ointment or a moisture chamber at bedtime. This helps prevent scratching of the cornea.

READ MORE: What is a neuro-ophthalmologist?

Bell’s Palsy: What Causes It and How Is It Treated? Healthline. August 2017.