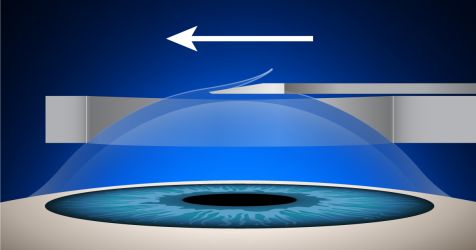 Epi-LASIK is a laser vision correction procedure that is very similar to LASIK and LASEK, and may be a good alternative to these procedures for certain eyes.

In epi-LASIK, the flap created on the cornea is thinner than a LASIK flap. This can be an advantage for patients with thinner-than-normal corneas.

The epi-LASIK flap is very similar to the thin flap created in LASEK surgery. In both procedures, the flap contains only cells from the very thin outer layer of the cornea, called the epithelium.

The difference is how the epi-LASIK and LASEK flaps are produced.

A LASEK flap is created with a tool that has a sharp blade. In epi-LASIK, the flap is separated from the underlying corneal layer (the stroma) with an instrument called an epithelial separator that has an oscillating plastic blade that has a thin blunt edge.

And unlike in LASEK, an alcohol solution typically is not applied to the eye in epi-LASIK to loosen epithelial cells from the underlying corneal stroma. Some surgeons prefer epi-LASIK over LASEK for this reason, since alcohol is toxic to epithelial cells and can increase healing time after the procedure.

After the epi-LASIK flap is created, it is folded back and the underlying central stroma is reshaped with an excimer laser — steps identical to those performed in LASIK.

Because the epi-LASIK flap is so thin, the surgeon typically will apply a soft contact lens over the flap when it is repositioned after the laser treatment. The contact lens acts as a bandage to increase comfort and allow new epithelial cells to grow onto the cornea more quickly for faster healing.

Your surgeon or eye doctor will remove the bandage contact lens at one of your early follow-up visits a few days after your epi-LASIK procedure.

Your vision probably will not be perfect immediately: In three days many patients do have 20/40 or even 20/20 vision, but others take longer — possibly three or six months — to reach their final result. Usually you can drive within a week after surgery.

These recovery times are significantly longer than with LASIK, which usually allows people to achieve good vision from the same day up to a few weeks later and to drive by the day after surgery.

As with any laser eye surgery, after Epi-LASIK it is very important to follow your surgeon's instructions exactly, because the quality of the final vision you achieve is affected by how well your corneas heal. Don't neglect to use the eye drops or other medications your doctor prescribes, and don't miss any follow-up appointments.

Who Can Have Epi-LASIK

If you are considering LASIK, but your doctor says you need Epi-LASIK instead, ask why.

It's not for everyone, but many surgeons who perform Epi-LASIK consider it a better option than LASIK for some patients. These include people who have thin corneas, with insufficient tissue for a good LASIK flap.

Epi-LASIK also may be safer than LASIK for people who have professions or hobbies that increase the chance of being hit in the eye (such as soldiers, police officers, boxers and racquet sports enthusiasts) because there's no risk of the flap being dislodged.