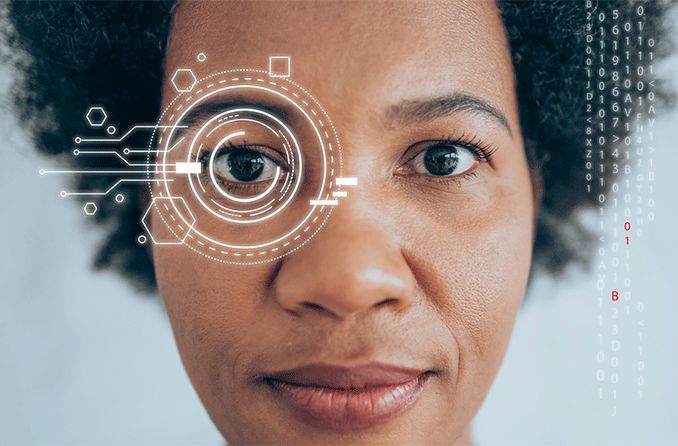 Engineers in Switzerland have developed retinal implant technology that could restore at least some sight for people with retinal blindness.

The researchers, from the Swiss Federal Institute of Technology in Lausanne (École polytechnique fédérale de Lausanne, or EPFL), have devised a retinal implant powered by smart glasses equipped with a camera and a microcomputer. The implant system relies on electrodes to stimulate retinal cells in order to supply artificial vision. The journal Communications Materials published the researchers’ findings in March 2021.

As the Swiss institute explains: The camera built into the smart glasses takes a picture of whatever is in the wearer’s immediate field of view and transmits the data to a microcomputer embedded in the glasses’ end piece.

The microcomputer converts this data into signals, which are sent to thousands of electrodes. These electrodes then “stimulate the retina” creating a black-and-white, pixelated image for the wearer. Dots of light sparked by the retinal stimulation form this image, and the wearer must learn how to interpret the dots so they can identify what they’re looking at.

“It’s like when you look at stars in the night sky — you can learn to recognize specific constellations. Blind patients would see something similar with our system,” Diego Ghezzi, the Medtronic Chair in Neuroengineering at the institute’s school of engineering, said in a news release.

This potentially revolutionary system, has yet to be implanted in humans, but the developers believe it’s ready for human trials. In the meantime, researchers have implemented a virtual reality program to mimic what someone might see if the device were to be implanted.

“Our simulations showed that the chosen number of dots, and therefore of electrodes, works well. Using any more wouldn’t deliver any real benefits to patients in terms of definition,” Ghezzi said.

‘Most promising treatment’ for retinal blindness

Nearly 50 million people around the world are blind, with at least a few million experiencing blindness due to a loss of photoreceptors in the retina.

According to the Swiss institute, this innovative retinal implant technology is the “most promising treatment” for blindness caused by retinal degeneration. “But current implants produce very poor results, and their wearers are still considered legally blind,” Ghezzi said.

In their Communications Materials article, the Swiss researchers noted that retinal implants have been tested mostly in blind patients affected by retinitis pigmentosa.

Unfortunately, several patients who underwent the implant surgery stopped using the implant within one to three years, according to the Swiss researchers. Furthermore, one-third of the patients who received the most common retinal implant indicated the implant had not affected their quality of life after three years.

The retinal implant created by the Swiss researchers isn’t the only implant being studied for partial or full restoration of vision.

In 2020, researchers at the University of Pittsburgh Medical Center reported they had fitted the first patient in the U.S. with a wireless retinal implant as part of a clinical trial designed to restore partial sight in people with advanced age-related macular degeneration (AMD). AMD causes gradual but permanent vision loss and is the leading culprit of vision loss among older Americans.

This retinal device contains a wireless chip that acts like an artificial retina. The chip is placed under the affected retina, working with augmented reality glasses that consist of a tiny built-in camera and infrared projector. This chip turns infrared light from the glasses into electrical signals that travel via the optic nerve to the brain. Patients then undergo training that enables their brain to interpret the signals.

Meanwhile, researchers from the Netherlands and Spain are working on a brain implant that stimulates the visual cortex of the brain and might restore vision in blind people. The visual cortex processes visual information from the retinas.

In their study, the researchers found that monkeys with the brain implant — equipped with hundreds of electrodes — were able to recognize simple shapes, motions or letters. In the journal Science, the researchers claimed their findings demonstrated the potential for electrical stimulation to restore vision to blind people.

“The device needs further development before it is ready for use in humans, but the work brings nearer the dream of restoring vision to people who have none. The approach is the only possible treatment for people without functioning cells in the eye — a group that includes some glaucoma and diabetes patients and those who have experienced a physical trauma,” Scientific American noted in its report on the study, published in December 2020 by the journal Science.

Dr. Daniel Yoshor, chairman of the neurosurgery department at the University of Pennsylvania’s Perelman School of Medicine, is also devising a way for a brain implant to stimulate the visual cortex. He and eight research colleagues described their experiment in May 2020 in the journal Cell.

“By tracing shapes with electricity onto the brain’s surface, Dr. Yoshor’s team is producing a relatively clear and functional kind of bionic vision,” according to IEEE Spectrum.

A retinal implant that could give artificial vision to the blind. Swiss Federal Institute of Technology in Lausanne. March 2021.

A retinal implant that is more effective against blindness. Swiss Federal Institute of Technology in Lausanne. March 2018.