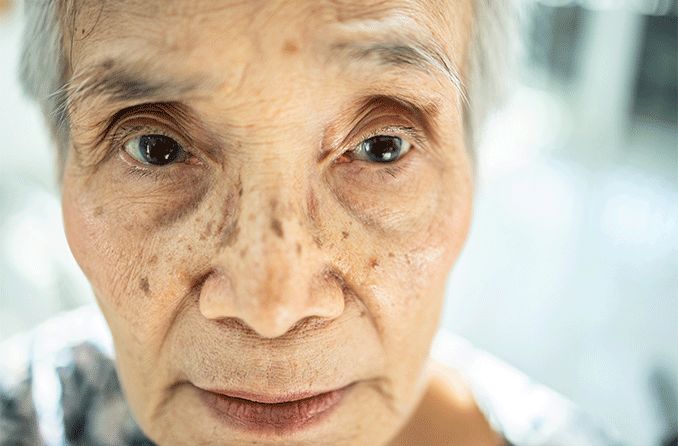 Enophthalmos, or sunken eyes, happens when an eyeball moves backward in the eye socket (also called the "bony orbit").

Fractures in the orbital bones often leave one eye noticeably sunken compared to the other. That’s why traumas from fights and car crashes are among the likely causes of enophthalmos.

Bear in mind, though, that a wide variety of things can shift the eye backward and produce enophthalmos. For instance, sunken eyes might be a symptom of cancer, HIV or a sinus defect.

Moreover, enophthalmos can cause double vision and may require surgery to fix. You don’t just ignore it and hope it goes away.

When an eye sinks toward the back of the socket, a lot of questions arise:

Let’s go through some quick answers to these questions.

What’s the definition of enophthalmos?

Enophthalmos (pronounced en-ahp-THAL-mus) combines the Greek prefix for “in” (en) with the Greek word for “the eye” (ophthalmos). It’s the opposite of exophthalmos, or bulging eyes.

In humans, both eyes should align closely in their eye sockets. If one of the eyes shifts backward (relative to the other eye), doctors call the condition enophthalmos.

What are the most common sunken-eyes symptoms?

Sometimes, it’s obvious that one or both eyes have sunken into their sockets. However, there may be more symptoms of enophthalmos, including:

These kinds of changes in appearance and vision will make more sense if you understand the underlying causes of enophthalmos.

What are the most likely causes of sunken eyes?

An eye socket’s contents include tear ducts, soft tissues, tendons, muscles, fat, fluids and seven orbital bones. Changes in any of these things can reshape the eye socket and change the eye’s position. Two kinds of changes typically cause enophthalmos:

The eye socket gets bigger

The bones in the eye socket keep the eyeball snug in its place. If the eye socket enlarges, the eye can sink backward, causing enophthalmos. What makes the socket expand?

The contents of the eye socket get smaller or go away

Diseases and aging can make the contents of the eye socket shrink or fade away, changing the position of the eyeball. These are some of the causes:

The wide variety of enophthalmos causes requires your doctor to perform careful assessments to figure out what’s going on.

Does dehydration cause sunken eyes?

It may seem reasonable to suspect that dehydration causes the tissues of the eye socket to shrink. After all, if too much fluid in tissues causes swelling, shouldn’t lack of fluid cause shrinkage?

Well, scientists suggest there are simply too many other possible causes, as outlined above, of enophthalmos to conclude that sunken eyes are a reliable symptom of dehydration.

How do doctors treat enophthalmos?

Doctors have three things in mind when treating enophthalmos:

Treatment starts with a thorough health history and physical examination. An eye doctor may measure each eye and assess how far one (or both) has sunk into the eye socket. You might also be asked for old photographs to compare your appearance now with years past.

Blood tests looking for diseases and other conditions might be part of the diagnosis. Magnetic resonance imaging (MRI) and computed tomography (CT) scans also might be included.

Treatment depends on what’s causing enophthalmos. For instance, fractures in the bones in the bottom of the eye socket (called orbital floor fractures) might cause double vision if the trauma is severe enough.

Treatment is tricky because an orbital floor fracture often causes massive swelling for up to two weeks. Once the swelling goes down, the double vision might go away, so doctors usually wait for the swelling to pass before deciding on the surgery. The operation often involves placing a small implant roughly the shape of a guitar pick in the eye socket. Ask your doctor about how the surgery will be done and the potential for side effects.

A condition like silent sinus syndrome where there’s no trauma to the bottom of the eye socket may still require surgery to get the eye back where it belongs. Fat injections might be another option.

Everything goes back to the cause of sunken eyes and the safest, most practical way to fix it.

When to call an eye doctor

Sunken eyes can trigger self-consciousness because they may cause the face to lose its natural symmetry (looking the same on both sides). This alone is cause enough to contact your eye doctor about resolving enophthalmos.

If you have double vision from sunken eyes, that’s all the more reason to talk to a doctor as soon as possible. The same is true for injuries to the eye socket. And because sunken eyes may be symptoms of serious diseases, you can’t afford to wait to contact a medical professional.