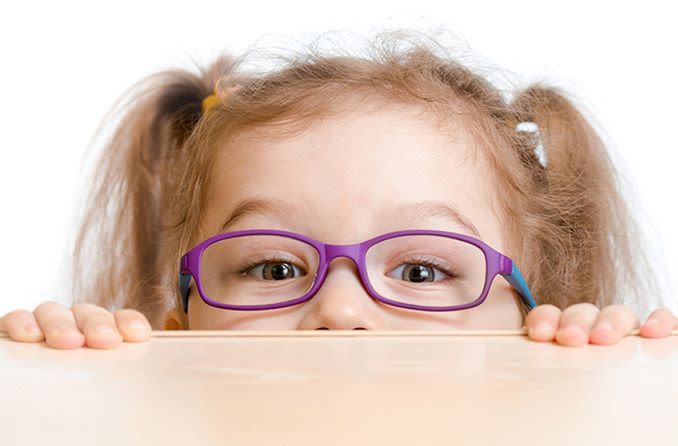 Early detection of children's vision problems is essential to make sure your kids have the visual skills they need to do well in school, sports and other activities.

Vision is arguably the most important of the five senses. It plays a crucial role throughout childhood and beyond. In fact, experts say 80 percent of what children learn in school is presented visually.

From infancy on, there are important milestones in your child's vision development. For example, during the first several months of life, a baby can focus only on objects up close. Those objects will be seen in high contrast colors only, such as black, white and red.

But by 6 months of age, your child's visual acuity should be much sharper, with more accurate color vision and better eye movement and hand-eye coordination skills.

To make sure your child's eyes are functioning properly and working together as a team during the early formative years, schedule his or her first eye exam with an optometrist or ophthalmologist at 6 months of age. Otherwise, a lifetime of poor vision in one or both eyes could occur. 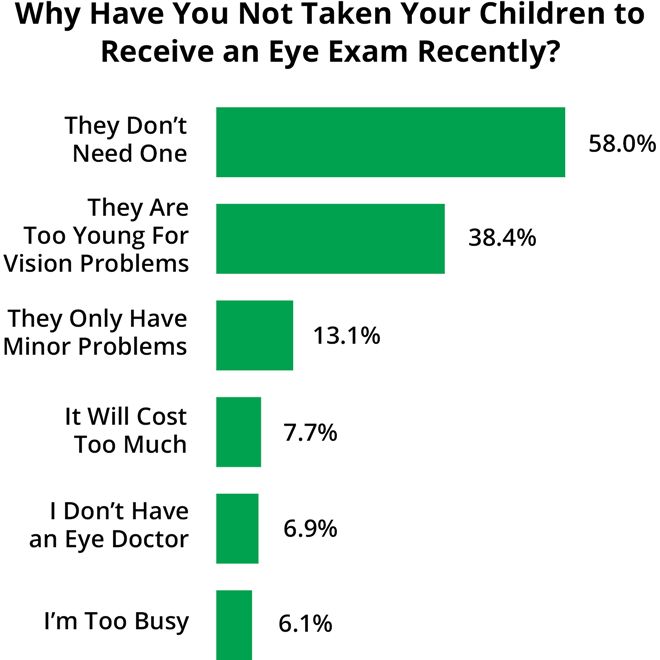 Even though most American parents say they have health insurance, many are not putting it to use.

According to VisionWatch's Parent-Child Vision Care study, nearly 60 percent of parents reported being covered by health insurance in January 2016.

Vision care insurance, in particular, was held by about 40 percent of all American families surveyed. And many more parents also reported that they participate in an MSA or FSA tax-deferred health plan and have additional supplemental insurance.

Unfortunately, this has very little influence on the frequency or history of eye exams among children in the United States. About 37 percent of parents with children living at home reported that their kids had never received an eye exam.

About half of the parents surveyed had not taken their kids for an eye exam in the past two years. Why? Most of them erroneously felt that their kids didn't need an eye exam (58 percent) or that they were too young for vision problems (38.4 percent).

Perhaps most shocking, more than 13 percent of parents said they had not taken their children for an eye exam because "they only have minor problems."

The survey found that children whose eyes had been examined in the past year were more likely to wear prescription eyeglasses, highlighting that eye exams do, indeed, lead to the diagnosis of visual problems that might otherwise handicap kids. — A.H.

Moving into the preschool and school-age years, parents face a new set of concerns:

Parents of school-age children should stay informed about vision correction options, such as using contact lenses instead of glasses to control nearsightedness and protective sports eyewear. Ensuring that children wear sunglasses is very important, too. [Learn more about sunglasses for kids.]

For answers to specific questions about your child's vision development, vision problems and eyewear needs, consult an eye doctor who specializes in children's vision.

Pets And Your Child's Eyes

Does your child have a pet? If so, take special precautions to avoid eye injuries or other eye problems. 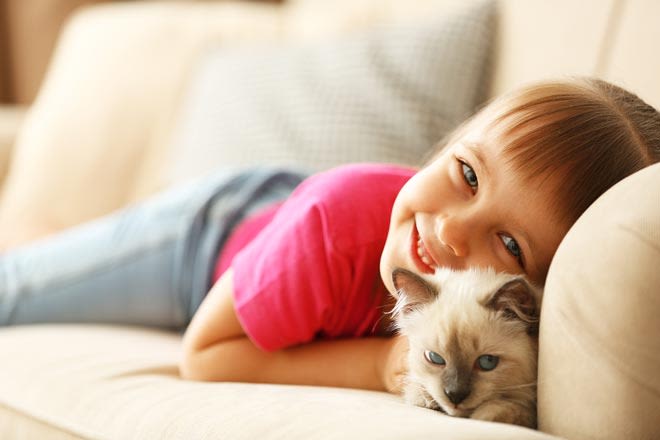 Dogs and cats can cause eye allergies if your child is allergic to their dander. Thankfully for allergy sufferers, certain breeds are hypoallergenic.

Exotic pets, such as reptiles and spiders, can pose special risks for eye problems. Many of these creatures have salmonella on their skin, and contact with the eyes or skin can cause serious illness.

Tarantulas, for example, are covered with tiny hairs that can penetrate human skin and eyes like tiny spears, causing inflammation. Sometimes the hairs are so small, they cannot be removed from the eye, even when viewed under a microscope.

Pets don't come equipped with safety warnings. So it's up to you to research possible health problems associated with animals before allowing your kids to have a pet. And it's always a good idea to have them wash their hands thoroughly with soap after handling an animal.

Are learning-related vision issues holding your child back?