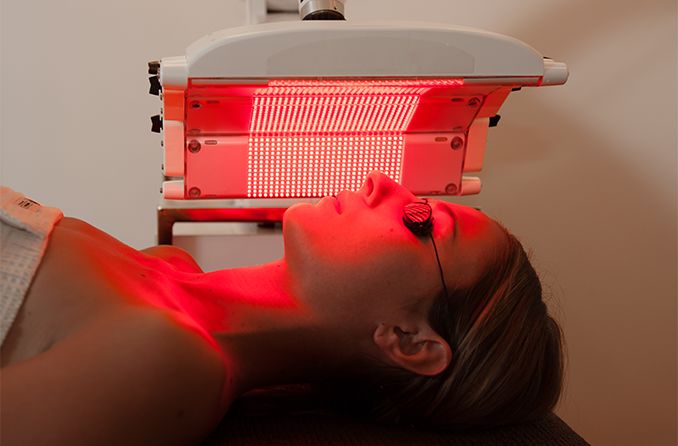 How does red light therapy affect the eyes?

Red light therapy is popularly used to improve the feeling and appearance of the skin. It promises to treat acne, wrinkles, scarring and even signs of aging on the face. But can it protect aging eyes? Research suggests that it is a possibility. But vision experts warn against these claims.

What is red light therapy?

Red light therapy involves exposing the skin to red light-emitting diode (LED) light to target unwanted skin features such as acne, wrinkles and age spots. This is done using devices such as LED masks (also called light therapy masks). However, at least one LED mask model has been recalled due to concerns over eye safety.

Research has found that different types of light hit the skin at different depths. For example, red LED light triggers special skin cells called fibroblasts, which produce collagen. Collagen is the protein that aids in the recovery of damaged skin.

While red light therapy is most commonly used for repairing blemished skin, other studies have proposed that it may also improve eye health. Some research also suggests that it can help with male and female pattern baldness and hair loss due to androgenetic alopecia.

Here’s what the research shows:

Those who struggle with dry eyes due to meibomian gland dysfunction (MGD) can greatly benefit from red light therapy, according to some findings. In a clinical trial of 52 patients with MGD, 90% reported relief from their symptoms after trying red light therapy.

In this study, red light was used to treat dry eye symptoms using a special red light-enhanced device. Patients placed the device over closed eyes for three minutes at a time at least twice a week. After three months of this practice, they reported relief from discomfort such as grittiness and burning sensations.

Other studies on the topic have produced similar results, though additional data has yet to be reviewed.

Located at the back of the eye, the retina and its photoreceptors — the rods and cones that sense light and color — are especially prone to decline with age.

These results were seen after individuals were exposed to deep red light for three minutes a day over a period of two weeks.

Highlights of the study include:

Other trials have been conducted around this new subject but haven’t yet made it to human test subjects. So far, some studies performed on elderly laboratory mice showed that red light therapy improved their retina functions by 25%.

SEE RELATED: What is color vision?

Despite positive findings, experts say there is not enough research to prove that using red light therapy around eyes is 100% safe and effective for everyone. Since things are uncertain, it’s important to take precautions before beginning any red light treatments, whether at home or in a doctor’s office.

Until more research is done, consider that there may be risks in red light exposure. And always talk to your eye doctor before beginning any kind of treatment on your eyes.

For the time being, be sure to protect your eyes from known harmful light sources such as ultraviolet (UV) rays and blue light given off by digital screens. And don’t forget to schedule your yearly eye exam.

LED lights: Are they a cure for your skin woes? Harvard Health Publishing. October 2019.

The effects of a red light technology on dry eye due to meibomian gland dysfunction. Investigative Ophthalmology & Visual Science. June 2017.

UV and sunglasses: How to protect your eyes