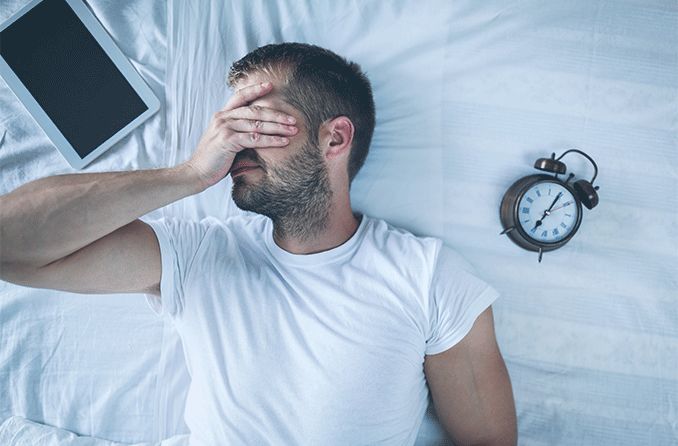 An audience member sits in a lecture hall and nods off after a bad night's rest. When she opens her eyes, she sees the old coffee stain on her jeans transform into a living creature — yes, a coffee stain creature — and scamper down her leg.

It shuffles around for 10 seconds before it stops moving. Back to a boring old coffee stain.

Stains sprouting legs might sound supernatural, but it was all too real for Whitney Heavner, now a staff scientist at the National Institute of Neurological Disorders and Stroke.

Heavner's lack of sleep had caused a visual hallucination, a surprisingly common side effect of sleep deprivation.

More than a third of American adults don't get enough sleep. By the CDC's guidance, that's anything less than seven hours per night for people over 18.

Short-term effects like confusion and hallucinations usually go away once you're rested. But sleep deprivation and poor sleep habits can also take a serious — sometimes life-threatening — toll on your long-term health.

Eyesight needs two main components to work: The eyes and the brain. Sleep affects both, in addition to your eyes' comfort level during the day.

In the short term, sleep deprivation can lead to:

When it comes to long-term eye health, poor sleep can also increase your risk of developing certain eye problems.

These risks, along with others, can be even higher in people who have obstructive sleep apnea, a condition that causes people to stop and start breathing while they sleep.

Around 34% of people around the world are nearsighted — and counting. Myopia mostly develops during childhood and adolescence, so any efforts to slow it down need to happen during these years.

Sleep deprivation can be particularly harmful to young people's eyesight. One study showed that 12- to 19-year-olds who got fewer than 5 hours of sleep per night were 41% more likely to have myopia than those who got more than 9 hours of sleep per night. Note that this doesn’t mean lack of sleep caused their myopia, but it was correlated with reduced sleep.

READ MORE: 12 signs your child might have vision problems

Glaucoma usually happens when fluid pressure inside the eye is too high. The outward pressure damages the optic nerve and leads to permanent vision loss.

Researchers can't say for sure that sleep problems cause glaucoma, but several studies show a connection between the two. One study labeled obstructive sleep apnea as a "major risk factor" for glaucoma.

Another study examined the sleep habits of thousands of people over age 40, all who had glaucoma. People who slept less than three hours, or more than 10 hours, were three times more likely to have optic nerve damage than those who slept around seven hours every night.

Poor sleep habits may be even more harmful for people who have diabetes.

About 4 million Americans have diabetic retinopathy. This complication of diabetes damages blood vessels inside the eye and can lead to vision loss.

There seems to be a "U-shaped" connection between sleep and diabetic retinopathy (DR):

Diabetic men may be at higher risk: When they sleep too much or too little, they're more likely to develop diabetic retinopathy, one study showed. Sleep didn't appear to have the same effect on women, but more information may be needed.

Almost 1 in 5 American adults lives with a mental illness. Sleep's effect on mental health isn't always obvious, but the connection is hard to ignore.

Sleep problems are very common in people who have:

Patients registered with standard psychiatric practices are about five times more likely to have chronic sleep problems than the overall U.S. population, according to Harvard Health.

In the shorter term, going just 24 hours without sleep can introduce symptoms of psychosis similar to those experienced by people who have schizophrenia. These include hallucinations, delusions and a general disconnect from reality.

Twenty-four hours without sleep might seem like a lot to most people, but you can probably think of at least one time you went 19 or 20 hours (or more) without sleep.

The effects may be temporary, but it shows how fine the line is between healthy sleep and troubling psychological symptoms.

If one set of side effects is most obvious after a sleepless night, it's probably cognitive function.

In general, the term cognitive function is a broad way to refer to the way people:

Sleep has a direct effect on how well the neurons work in your brain. Neurons are the building blocks of the body's nervous system — scientists think there are around 86 billion of them in the brain alone.

Neurons work best when you have plenty of rest (but not too much). Without proper sleep, neurons are out of sync — the split-second neuron assembly lines responsible for thoughts, decisions and feelings are malfunctioning.

That foggy feeling when you try to focus, difficulty remembering what you had for breakfast, a frustratingly short attention span — all of these can happen when your neurons are misfiring.

Researchers have even found that tired driving can be just as dangerous, if not more dangerous, than driving drunk.

These aren't extreme levels of sleepiness, either. In many cases, drivers with a moderate level of fatigue are comparable to drivers over the legal blood-alcohol limit.

Researchers are also getting a clearer view of how poor sleep habits might cause chronic cognitive health conditions.

Several studies have shown a possible link between sleep problems and the risk of developing dementia later in life, including Alzheimer's disease.

One long-term study showed people were 30% more likely to develop dementia if they averaged less than seven hours of sleep per night during their 50s and 60s.

Diabetes can lead to widespread health effects, especially when it isn't controlled well.

Bad sleep habits can have a two-part effect:

Poor sleep habits increase the risk of developing type 2 diabetes by increasing the amount of hemoglobin A1c, a protein in your blood. A1c helps transport oxygen throughout your body and is closely tied to blood sugar levels.

People who tend to sleep a little (less than five hours) or a lot (more than nine hours) both had "significantly high" levels of hemoglobin A1c and blood glucose, one study showed.

For people who already have diabetes, getting fewer than seven of hours of sleep can:

Blood pressure is the amount of pressure your blood creates against the walls of your arteries, the blood vessels that move blood from your heart to the rest of your body.

In healthy people, blood pressure dips between 10% and 20% from their daytime levels while they sleep. Frequent surges higher than this can be bad for cardiovascular health.

In addition to others, several things can affect nighttime blood pressure levels:

Conditions like obstructive sleep apnea and nocturia (frequent urination at night) are some of the most common causes of nighttime blood pressure surges.

So if sleep is known to affect short-term blood pressure, can it also cause hypertension (chronic high blood pressure) and heart disease?

Without a doubt, says the CDC.

Sleep deprivation and insomnia are both linked to higher risks of hypertension, one study notes. "Even small increases" in nighttime blood pressure can significantly increase the risk of dying from a cardiovascular problem.

Sleep deprivation increases ghrelin, the hormone that makes you hungry, and reduces leptin, the satiety hormone. Together, these changes can lead to eating more and gaining weight.

How to prevent these effects

In today's frantic, screen-loaded world, "a good night's rest" is easier said than done. But you can improve your odds of sleeping through the night with these CDC-approved techniques:

Around 70 million Americans — 1 in every 5 people — are living with a sleep disorder.

If you regularly have a hard time sleeping or feel tired during the day, talk to your doctor. They may recommend a sleep study to test for sleep-related conditions like sleep apnea, insomnia and restless leg syndrome.

By diagnosing these conditions when they're present, doctors can prescribe treatment that immensely improves the quality of someone's sleep. In some cases, treatment can even be life-saving.

READ NEXT: What do your eyes do while you are sleeping?

Not quite enough: The consequences of sleep deprivation. Stanford Center for Sleep Sciences and Medicine, HuffPost. July 2013.

1 in 3 adults don’t get enough sleep. Centers for Disease Control and Prevention. February 2016.

How much sleep do I need? Centers for Disease Control and Prevention. Accessed April 2022.

How lack of sleep affects your eyesight. American Academy of Sleep Medicine. June 2020.

The prevalence of diabetic retinopathy among adults in the United States. Archives of Ophthalmology. April 2004.

Sleep duration and cognition: Is there an ideal amount? Sleep. March 2019.

Sleep for a good cause. Centers for Disease Control and Prevention. Accessed April 2022.

How can exercise improve cognitive performance?

Is dark mode better or worse for your eyes?