How frequently do young children use computers and other digital devices these days? The answer may astound you. And it could result in a problem called computer vision syndrome.

Computers and vision by the numbers

According to the National Center for Education Statistics, 94 percent of American children ages 3 to 18 currently have access to a computer at home. 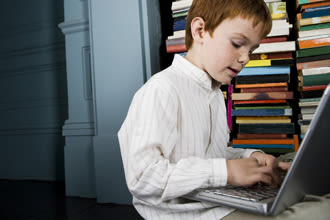 Should you worry about how much time your child spends in front of the computer every day?

Because this rapid increase in the use of computers and other digital devices by children has occurred within just the past decade or two, there’s no conclusive data regarding the potential harmful effects of too much screen time on kids' eyes — both in the short-term and later in life.

But some eye doctors are concerned.

A primary concern that many eye care professionals have is that significant hours of computer use by kids may put them at greater risk for developing myopia (nearsightedness).

Research appears to confirm that opinion. A large study conducted by the National Eye Institute found that the prevalence of nearsightedness among Americans has increased from 25 percent to 41.6 percent of the population over the past 30 years — an increase of more than 66 percent.

The time frame of this significant increase in myopia parallels the ramp-up of hours of computer use worldwide. And the greatest risk for nearsightedness and myopia progression takes place in childhood.

But another concern is that more eye doctors are seeing children in their offices who are experiencing symptoms of computer vision syndrome — a condition characterized by a combination of eye strain, headaches and fatigue-related discomfort and posture problems.

High-energy blue light emitted by the screens of computers and other digital devices appears to contribute to Computer Vision Syndrome symptoms. Also, research suggests blue light has the potential to cause oxidative stress on the retina of the eye over time. Some researchers believe this stress on the retina might increase one's risk for age-related macular degeneration later in life.

More research is needed to determine the long-term effects of blue light from computer use on the eye. But many eye doctors are urging caution, because when today's children become tomorrow's seniors, they will have been exposed to far more blue light from digital devices than previous generations have been.

Symptoms of computer vision syndrome — headaches, eye strain, posture problems, etc. — are good reasons to schedule an eye exam for your child. Addressing these issues early not only will relieve unnecessary discomfort, it may also reduce the risk of vision problems or eye health concerns later on.

[If you need an eye care provider, click here to find an eye doctor near you.]

In addition to scheduling an eye exam, here are a few helpful things you can encourage your child to do to decrease the risk of computer vision syndrome and keep his eyes comfortable, seeing well, and healthy:

And if your child already wears glasses, ask your eye care professional about photochromic lenses and anti-reflective coating. These eyewear products can increase visual comfort and decrease your child's exposure to blue light both indoors and outside.

Digital devices: Bad for kids' eyes? Learn the risks of spending too much time staring at screens.

What causes myopia? Learn about the causes and risks of nearsightedness in kids.

Children's eye exams Facts about eye exams for kids and when to schedule them.

Student access to digital learning resources outside of the classroom. National Center for Education Statistics. April 2018.

Blue Light Facts: Is Blue Light Bad For Your Eyes?

Quiz: How much do you know about digital eye strain?