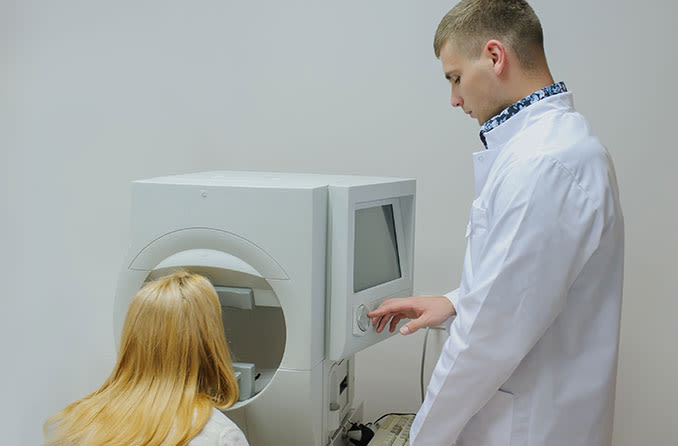 Diagnosing ptosis seems pretty straightforward. After all, the condition is characterized by drooping eyelids, which are fairly simple to detect.

But ptosis testing doesn’t end at eyelid observation. Eye doctors will typically look for other ptosis signs that help them pinpoint what’s causing your droopy eyelids and establish a solution.

Curious as to what a ptosis test involves? Learn more about the different tests administered when diagnosing ptosis and what happens after you’ve been diagnosed.

What is done during a ptosis test?

Pupils are checked for abnormalities

It’s normal for your eye doctor to test your pupillary reaction when diagnosing ptosis. While this is done in all comprehensive eye exams, it’s especially important when testing for ptosis because it can indicate nerve weakness.

First, your eye doctor will observe your eyes in different levels of lighting to check for anisocoria (different sized pupils). Your doctor will then typically use a flashlight from the side of your face to direct light into each of your eyes to test how your pupils respond to light.

Direct response (how the pupil in which the light is being shone reacts) and consensual response (if the opposite pupil reacts the same as the one exposed to light) are noted during the exam.

Abnormal pupillary response, particularly a smaller-than-normal pupil that has difficulty dilating, could indicate Horner’s syndrome when paired with a droopy eyelid. Your eye doctor may also ask if one side of your face is unable to sweat, as this is another common sign of Horner’s syndrome.

When diagnosing ptosis, your eye doctor will closely examine the position of your upper eyelids — in relation to each other and to the pupil of each eye.

Along with the eyelids themselves, your eye doctor will check the effectiveness of the levator muscles: the muscles responsible for lifting your eyelids and keeping them open.

They do this by securing the muscles in your forehead (frontalis), and having you look upward and downward. The distance of how far your upper eyelid moves when your gaze changes, will be measured and analyzed.

A visual field test is typically performed only in severe ptosis cases. The goal is to determine how much of an individual’s vision is inhibited by the droopy eyelid. This is sometimes called a Humphrey visual field test because the Humphrey Visual Field Analyzer is the most popular device used to perform this type of test.

The test involves having the patient place their head on a chin rest within the opening of the large bowl-like structure of the field analyzer. One eye remains covered while the other eye is to stay focused on a central fixation point.

When the test begins, small light flashes of different intensities appear (one at a time) from different positions within the bowl structure. While the patient focuses on the center point, they are instructed to press a button every time they see a flash of light in their peripheral vision.

Individuals with severe ptosis will have difficulty detecting lights in upper regions of their peripheral vision due to an obstructing eyelid. The machine keeps track of when the button is pushed during the test and analyzes the results to create a map of the size and shape of the patient’s visual field.

Results of your ptosis test may determine that treatment is required in order to restore clear, unobstructed vision. If this is the case, your eye doctor will likely refer you to an oculoplastic surgeon who specializes in cosmetic surgery of the eyelids.

If results show a significant amount of eyesight is affected by ptosis, corrective surgery (blepharoplasty) becomes “medically necessary” rather than cosmetic. Medically necessary procedures are more likely to have some or all costs covered by insurance, depending on your insurance carrier and plan.

The first step to finding a solution for your droopy eyelids is to schedule a comprehensive eye exam. Your eye doctor will be able to evaluate the position of your eyelids during the exam and recommend the best course of action to help resolve your ptosis.