Currently, there are no treatments that can permanently reverse nearsightedness.

However, a special type of contact lens fitting called orthokeratology can temporarily eliminate your need for glasses or contacts during the day, and promising new myopia control methods can slow the progression of nearsightedness in children.

Nearsightedness (myopia) is a refractive error of the eye. In the case of myopia, the eyeball grows too long from front to back, causing light that enters the eye to focus at a point in front of the retina instead of directly on the light-sensitive retinal surface. The result is distance vision that appears blurry.

Vision problems from myopia can be corrected by prescription eyeglasses and contact lenses.

When nearsightedness stabilizes (generally, in one's early twenties), LASIK and other laser eye surgery are good options to correct myopia. (OK, you could say that these types of eye surgery do reverse nearsightedness — but only by permanently removing tissue from the front surface of the eye or altering the power of the eye in some other way.)

A number of recent studies suggest that it may be possible to slow myopia progression during childhood and adolescence. The treatments involve changing the structure of the eye and the way it focuses.

The four types of treatments that show the most promise for controlling myopia progression are:

Atropine eye drops. Nearsightedness in children has been linked to focusing fatigue. Atropine drops are used to disable the eye’s focusing mechanism. Early studies found the drops produced an average reduction of 81 percent in myopia progression among nearsighted children.

Multifocal contact lenses. These special lenses have different powers in different zones of the lens to help a person see clearly at a range of distances.

Orthokeratology. Ortho-k relies on corneal reshaping lenses that are worn while a person sleeps to temporarily correct nearsightedness. There is evidence that children who undergo orthokeratology for several years may have a lower degree of myopia as adults compared to children who were treated with traditional corrective lenses.

Multifocal eyeglasses. Compared with regular single vision eyeglasses, multifocals have been shown to slow the progression of nearsightedness in children by a small but statistically significant amount in several studies.

Slowing the progression of myopia can help an individual avoid high myopia that requires thick, corrective eyeglasses and increases the risk of serious complications like cataracts, glaucoma and retinal detachment.

If it's been more than a year since your last eye exam, schedule one today with an eye doctor near you. 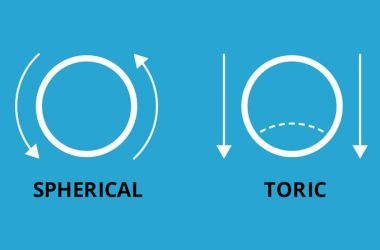