By Liz Segre, with updates by Marilyn Haddrill; contributions and review by Charles Slonim, MD 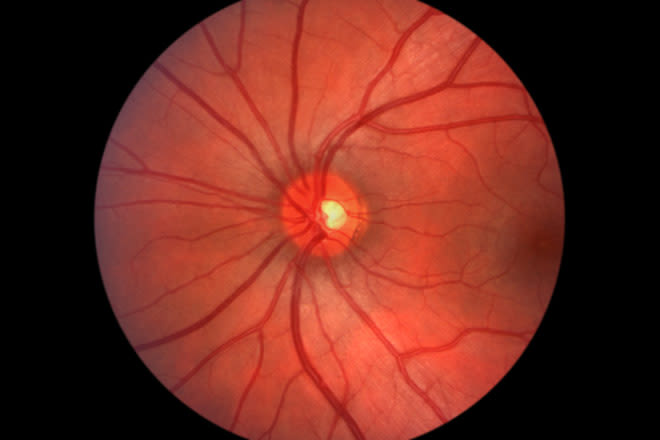 In the past, about a quarter of active AIDS patients developed CMV retinitis. However, this figure is dropping dramatically, thanks to a potent combination of drugs used to treat AIDS that help restore function of the immune system. In recent years, these drugs have helped decrease presence of CMV retinitis in late-stage AIDS by more than 80 percent, according to one report.

When CMV invades the retina, it begins to compromise the light-sensitive receptors that enable us to see. This does not cause any pain, but you may see eye floaters or small specks and experience reduced visual acuity (blurry vision) or decreased peripheral vision.

Light flashes and sudden vision loss also can occur. The disease usually starts in one eye but often involves both eyes. If left untreated, CMV retinitis can cause a detached retina and blindness in just two to six months.

CMV retinitis is caused by the cytomegalovirus, a very common virus belonging to the herpes family. About 80 percent of adults harbor antibodies to CMV, which indicates that they have been infected with the virus but their bodies have successfully fought it off.

For people with AIDS, the difference is that their weakened or non-functioning immune system cannot stave off this virus. Other people with a weakened or suppressed immune system, such as those undergoing chemotherapy or a bone marrow transplant, also are at risk. CMV retinitis occurs much less frequently in this group of patients than in the AIDS population.

Also, in older adults with weaker immune systems, the virus can spread from a shingles infection on the forehead and/or nose and infect the retina, causing CMV retinitis.

If you have active AIDS and are experiencing visual symptoms, you should see a retina specialist immediately. A person newly diagnosed with CMV retinitis can expect to visit the specialist every two to four weeks.

Once the disease is controlled, those visits may be with your regular eye doctor every three to six months, according to Robert Kalayjian, MD, an infectious disease specialist at Case Western Reserve University School of Medicine in Cleveland.

Drugs for CMV Retinitis. The anti-viral drugs commonly used to treat CMV retinitis are ganciclovir (Cytovene), foscarnet (Foscavir) and cidofovir (Vistide). They can slow down the progression of CMV, but they can't cure it.

Like many drugs, these treatments can cause unpleasant or serious side effects. Until recently, all three were given intravenously, and ganciclovir and foscarnet required an indwelling catheter placed in the chest for daily infusions.

Ganciclovir is now available in pill form and oral doses typically are recommended following two weeks of intravenous infusion. It also can be administered via an intravitreal implant called Vitrasert (Bausch + Lomb).

When Vitrasert is used, the implant is inserted inside the eye in the vitreous body. During a five-to-eight-month period, Vitrasert slowly releases a precise amount of ganciclovir. The medication penetrates directly into the vitreous and retina, to the source of the CMV retinitis.

Unlike intravenous or oral ganciclovir, Vitrasert typically does not cause systemic side effects such as nausea. Vitrasert is implanted as an outpatient procedure, not requiring hospitalization. The implantation usually takes less than an hour and requires only local anesthesia.

Drugs for HIV. The biggest treatment breakthrough is highly active antiretroviral therapy (HAART), a combination of drugs that suppress the human immunodeficiency virus (HIV), also known as the AIDS virus. HAART allows the immune system of an AIDS patient to recover and fight off infections such as CMV retinitis.

Your doctor may suggest you continue taking anti-CMV drugs for the first three or more months of HAART. Your immune system sometimes improves right away, but CMV retinitis can take a little longer to respond.

A few patients on HAART develop a serious, sight-threatening inflammation inside the eye called immune recovery uveitis. Causes of the inflammation are unclear and require further study.

Also, depending on individual variables, patients with CMV retinitis and who are undergoing various drug treatments can be at higher risk for vision problems such as retinal detachment and cataracts.

What is Cytomegalovirus Retinitis? American Academy of Ophthalmology website. March 2017.