What is a pediatric cataract? 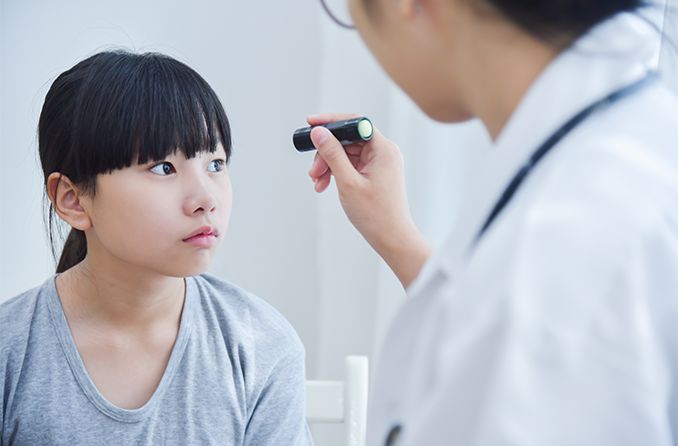 What are pediatric cataracts and who do they affect?

A cataract is a clouding of the lens of the eye. In children, the condition is called pediatric cataracts. Normally, the lens is clear, and images come to a sharp focus on the retina. These images are then processed by the brain. Pediatric cataracts can distort those images, causing blurry vision or blindness in kids.

Pediatric cataracts can occur in only one eye or in both eyes. Cataracts in children can range in size from tiny dots to a thick cloud in the lens. Some pediatric cataracts are so small they may not affect vision at all. Others can cause moderate to severe vision problems.

How do pediatric cataracts cause vision loss?

A cataract interferes with light passing through the lens of the eye. When that happens, light rays that enter the eye don’t bend (refract) as they should. Normally, when light enters a healthy eye, it gets focused onto the retina, located at the back of the eye. The retina converts light into signals sent to the brain.

When a cataract in the lens reduces the light reaching the retina, the brain can’t get a clear image. This affects a child’s ability to see. Vision in children who have pediatric cataracts is still developing. So, pediatric cataracts can lead to abnormal visual development in infants and older children.

How common are pediatric cataracts?

Pediatric cataracts are rare. About three to six children per 10,000 are born with congenital cataracts in the United States. Globally, the incidence of cataracts varies.

Why do children develop cataracts?

Genes tell cells how to make a specific protein. They also give instructions to the cells for the proteins that affect the eye’s lens structure and clarity.

Blunt or penetrating injuries to the eye can also cause cataracts in children.

Types of cataracts in children

First, there are two primary classifications of pediatric cataract, determined by the child’s age when the cataract forms.

The type of pediatric cataract depends on the part of the lens affected:

A posterior subcapsular cataract is a thin layer of cloudiness on the back surface of the lens cortex. This type of cataract can be caused by steroids. It can also occur as a result of a vitrectomy surgery or as a complication of radiation therapy for eye tumors.

Vision problems associated with this type of cataract include:

This cataract has an opacity, or clouding, at the front part of the lens capsule. The type is congenital and doesn’t usually grow as the child ages. It also doesn’t normally have much visual impact.

With a posterior polar cataract, there is central opacity at the back of the lens. This is a rare form of congenital cataract that forms in the embryo or during early infancy. Yet someone may not show symptoms until 30 to 50 years later. Symptoms in later life include glare during night driving, difficulty reading fine print and light intolerance.

This is a plaque-like cataract on the back of the lens. PFV cataracts don’t progress over the child’s lifetime. If left untreated, the child may develop eye and vision problems past infancy, including:

Traumatic pediatric cataracts are caused by blunt or penetrating force that injures the lens. This type of cataract can form right after the injury. But it could also take months or years to develop.

How are pediatric cataracts diagnosed?

Many newborn babies’ congenital cataracts are found during the doctor exam at birth. A pediatrician may diagnose cataracts later at a well-baby checkup. Acquired cataracts develop after birth, and pediatricians usually notice them during vision screenings or after a traumatic eye injury.

For cataracts in one eye (unilateral), a comprehensive eye exam can confirm a pediatric cataract diagnosis. When cataracts are in both eyes (bilateral), it may be due to a genetic predisposition. The pediatrician will ask about family medical history. If there is no family history of pediatric cataracts, the doctor may run urine and blood tests to find the cause.

How are pediatric cataracts treated?

About pediatric cataract surgery and recovery

Generally, cataract removal is a safe surgery, although surgery risks include:

Most children need ongoing treatment after surgery to repair the eye and brain connections. Post-surgery treatment includes refractive correction so the eye can focus clear images onto the retina.

After cataract removal, children often need glasses, contact lenses and/or a lens replacement in the eye. A child with a lazy eye may need patching, in which the stronger eye is covered to help the weaker eye’s vision.

When a child with pediatric cataracts receives timely, proper treatment and follow-up, the visual outlook is good. However, the child may still need several years of visual rehabilitation.

Posterior polar cataract: A review. Saudi Journal of Ophthalmology. May 2011.