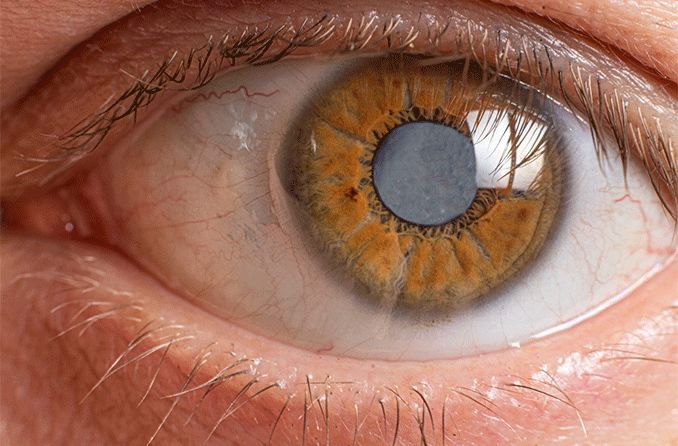 Can you see cataracts?

A cataract is a clouding of the eye’s natural, crystalline lens. You cannot see a cataract until it is very advanced — called a “mature cataract.” An eye with a mature cataract will appear milky white or brown and opaque and can be seen in someone’s eye or in your own eye in the mirror.

Even when a cataract is in its earliest stage, your eye doctor should see it in the cataracts test during a comprehensive eye exam. They will also be able to tell what type of cataract you have as well as how advanced it is.

There are four stages of cataracts, and each has a different appearance.

Higher grade cataracts can make the pupil look white or gray instead of black.

Each type of cataract looks unique

There are several types of cataracts. Each type of cataract starts in a different part of the lens. Each grows in a unique way and has a distinct appearance.

Cataracts that begin in the center of the lens

Cataracts that start in the center of the lens are called nuclear cataracts. They are the most common form of cataract, and will grow very slowly over a period of years.

Nuclear cataracts can be very small at first, and may not impair vision until they have grown larger and cover other layers of the eye.

Cataracts that begin in the back of the lens

Cataracts that form on the back of the lens are called posterior subcapsular cataracts. Your eye doctor will see a small, cloudy area in the back of the lens. These cataracts tend to grow quickly and block light passing onto the retina. They also tend to disrupt near vision and are more common in younger people.

Cataracts that begin at the edge of the lens

Cataracts that start growing at the outer edge of the lens are called cortical cataracts. They will look like white, triangular streaks on the lens’ outer edge and resemble spokes.

The spoke-like streaks will steadily grow toward the center of the lens until they interfere with light passing onto the retina.

Cortical cataracts are graded as such:

A traumatic cataract is caused by direct trauma or injury to the eye.

When the eye has been pierced or severely injured, the cataract often resembles a rosette or a sharp-edged flower. The cataract may be small and localized. Other times, a traumatic cataract may encompass the lens.

Other types of cataracts

A Christmas tree cataract has red, green and gold sparkles that cloud the lens. This type of cataract is named after Christmas tinsel. These can occur when someone has a condition called myotonic dystrophy.

A secondary cataract is not really a cataract. It occurs after cataract surgery, when the capsule in your eye that holds the artificial lens begins to grow new cells. These new cells can cloud vision. This type of ‘cataract’ is easily treated with an office procedure.

READ NEXT: What are the symptoms of cataracts?

Can you see cataracts in mirror? NVISION. January 2021.

Cataract symptoms — When should you see the doctor? Oregon Eye Specialists. July 2012.

What are the three types of cataracts? Eye Associates of Tucson. Accessed August 2021.

What do cataracts look like? American Academy of Ophthalmology. May 2020.

Can cataracts come back after surgery?

What is nuclear sclerosis?