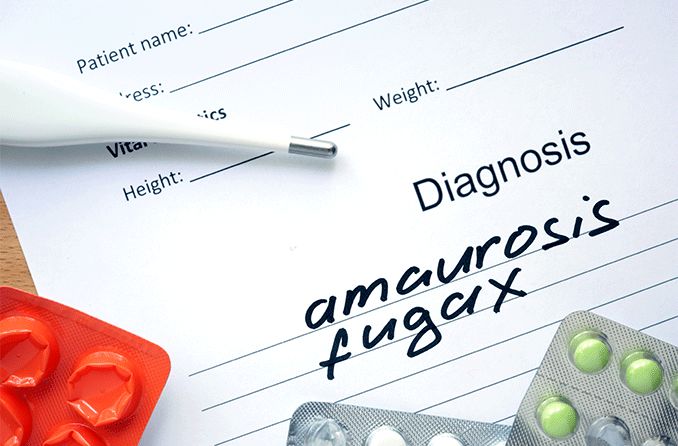 If your vision goes dark for a few minutes to a half-hour and then recovers, then you’re probably experiencing amaurosis fugax. People often suffer strokes within a few months after amaurosis fugax, so you must see a doctor as soon as possible if this happens to you.

A long list of problems can bring on amaurosis fugax. Usually, it’s due to an occlusion, or blockage, of the arteries carrying blood to the retina. Blindness that comes and goes in minutes can be alarming. If it happens to you, a crop of questions may arise:

Let’s dive in and find the answers to these questions.

What is amaurosis fugax?

Vision loss that lasts from 30 minutes to several hours is no longer considered temporary (transient). A short outbreak of blindness is quite different from a long one. Amaurosis fugax gives doctors a label to identify the shorter time span.

People with amaurosis fugax often say their vision goes dark like a window shade being pulled down. Amaurosis fugax can happen in one eye or both, lasting up to 30 minutes before vision returns. You might also feel a headache and neck pain.

In the eyeball, arteries carry oxygen, fuel and vital nutrients to the retina. Light-sensitive nerves in the retina capture visual signals that travel over the optic nerve to the brain. The visual center of the brain translates these signals into eyesight.

The retina needs blood flow to do its job. Some diseases or conditions block blood flow in the optic arteries (or slow it down). Amaurosis fugax happens when this blockage or slowdown lasts up to 30 minutes and then goes away.

These are the most likely causes of amaurosis fugax:

These are some of the prime risk factors for amaurosis fugax:

Because so many variables contribute to amaurosis fugax, you need to see a doctor to figure out what’s going on.

The prognosis for amaurosis fugax can be positive if you act quickly. Ignoring it, however, could bring serious problems, including permanent vision loss. And without immediate attention, you could be missing alarm bells warning of a future stroke.

These are the main ways that doctors diagnose amaurosis fugax:

With data from these sources in hand, doctors can create a plan for what to do next.

Because amaurosis fugax comes and goes so quickly, doctors usually cannot treat it while it’s happening. Instead, they treat the underlying causes.

That can be as simple as monitoring your situation or prescribing blood-thinning medications.

Doctors may also encourage you to:

If tests discover blockage in your carotid artery, surgery can improve blood flow. Inserting a stent might be another option.

Your treatment plan will vary depending on your age, your health and the risk factors involved with each treatment.

How to prevent amaurosis fugax

Keeping your brain healthy is a great way to reduce the risk of stroke and, by extension, the mini-strokes that cause amaurosis fugax. The American Stroke Association recommends seven key activities to promote brain health.

It’s also imperative to stay on top of conditions like diabetes, multiple sclerosis and irregular heart rates, which may have an impact on amaurosis fugax.

When should I see the doctor?

Call your doctor immediately if you experience sudden vision loss. There’s no time to lose because treating a stroke quickly is key to preventing permanent damage.

Of course, it may not be a stroke, given all the possibilities outlined above. But you should treat amaurosis fugax as a serious condition — just in case.

What is night blindness?

What is color blindness?

What is the blind spot in my eye?