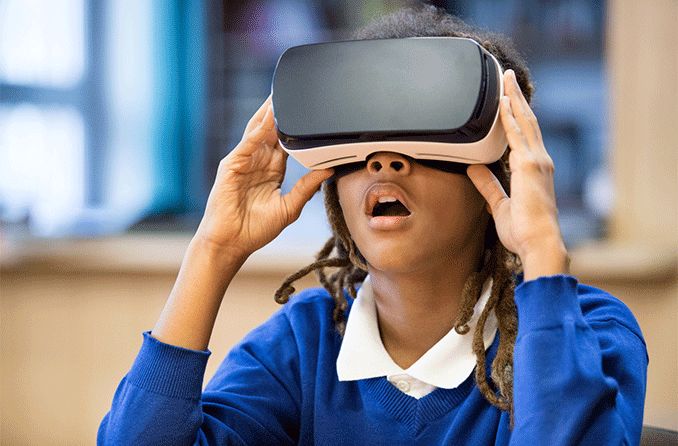 In 2020, an estimated 52.1 million Americans slipped on headsets to immerse themselves in virtual reality (VR). Unfortunately, VR is not all fun and games. Researchers say VR headsets may cause eye problems, although there’s no evidence of long-term damage.

“Virtual reality is constantly advancing and new technologies and applications [are] regularly emerging,” the Canadian Association of Optometrists advises. “For now, the best advice is to pay attention to warnings that come with VR headsets, limit time spent in the virtual world, and ensure all users have regular comprehensive eye examinations with an optometrist to ensure eye health and contribute to overall health.” Virtual reality enthusiasts can also talk to their optometrists about VR prescription lenses. For players who already wear corrective glasses, these prescription inserts can be fit into their favorite headsets.

Effects of VR on your eyes

The American Academy of Ophthalmology explains that staring for too long at a VR screen can lead to eye strain or fatigue. Why? Because we tend to blink less when using a device with a digital screen than we normally do, leading to eye strain or fatigue. Furthermore, a study published in 2019 suggests that eye fatigue among users of VR headsets results from the discrepancy between virtual and perceived depth.

Visually induced motion sickness “remains an obstacle to the widespread adoption and commercial development of technologies associated with [VR headsets],” according to a research analysis published in 2018.

The analysis notes that children, women, and people with unstable posture, defects in their field of vision or a history of motion sickness may be especially susceptible to cybersickness.

What Oculus says about VR headsets and vision

In a user’s handbook for VR headsets sold by Facebook-owned Oculus, the company reports about 1 in every 4,000 users may experience symptoms associated with seizures, including eye or muscle twitching, severe dizziness, or blackouts that are triggered by light flashes or patterns. Oculus says this may happen when someone wearing a VR headset is watching TV, playing a video game or otherwise immersing themselves in virtual reality.

This kind of reaction is more common in children and young people, according to Oculus. Anyone suffering these symptoms should stop using the VR headset and visit a doctor, Oculus recommends.

Furthermore, Oculus suggests immediately halting use of the VR headset if you experience:

Can a VR headset damage your eyesight?

In 2020, VR developer Danny Bittman complained that wearing a VR headset for hours a day had harmed his vision. Bittman claimed his vision had deteriorated “dramatically” over a three-year period, although he said eyeglasses were prescribed to correct the problem.

Nonetheless, VR headsets remain a concern for parents. In a 2017 survey commissioned by the nonprofit group Common Sense, 8% of parents with children age 8 to 17 who use VR reported their kids had suffered from VR-related eye strain.

Manufacturers warn that children under 13 should not use VR headsets because of the nature of some VR content and because the size of the headset is not intended for children. But a study published in 2020 found that young children tolerate “fully immersive” VR games without “noteworthy effects” on the coordination between visual perception and physical movement. Likewise, a study published in 2017 showed no serious deterioration of vision among children 8 to 12 who played a VR video game for 20 minutes. But two study participants did run into trouble detecting differences in distance.

While VR headsets may cause concerns about potential harm to our vision, they also can help people enhance their vision.

When should I see an eye doctor?

If you notice changes in your vision (for example, your vision becomes blurred) or you feel eye discomfort or eye pain while using a VR headset, stop using the headset and call your eye doctor. Your doctor will perform a comprehensive eye exam to determine if you have any vision problems that require treatment.

Do gaming glasses really work? Yes, they do… but not for everyone.

Advantages of a 24-hour digital detox for kids

What are the effects of too much screen time?