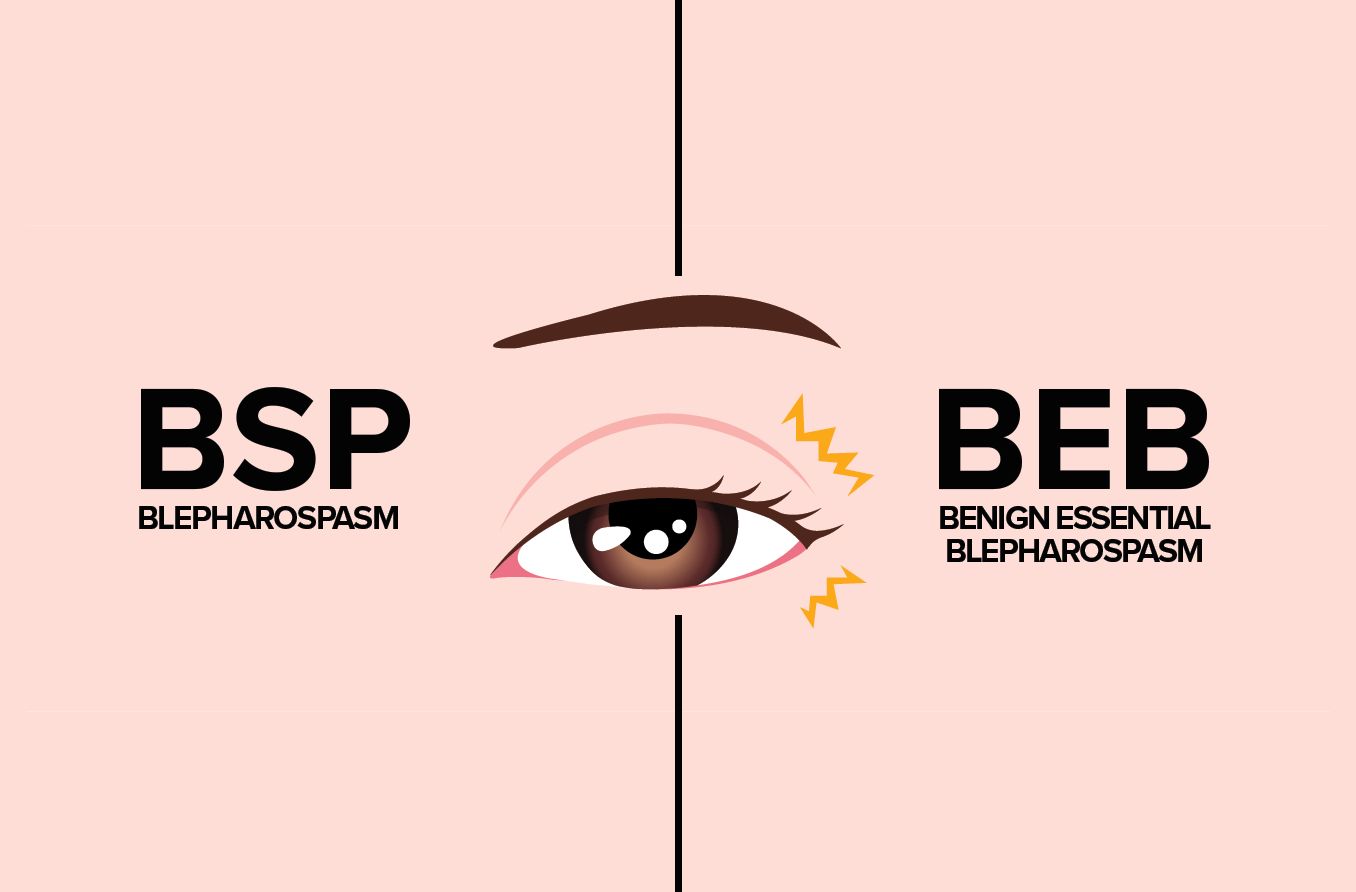 Blepharospasm (pronounced BLEF-uh-roh-spaz-uhm) is a name used to describe involuntary eyelid movement. It is more severe than a regular eye twitch.

Regular eye twitching is common and usually involves sporadic pulsing of the upper or lower eyelid. However, BSP is a stronger spasm that may occur more rhythmically than what is experienced in a regular eye twitch.

Blinking or closing the eyes is a trait seen in severe cases of BSP. This may affect a person’s ability to perform certain tasks, like driving — especially if the eyes are kept closed for more than a few seconds.

There are two types of BSP: primary and secondary.

Primary blepharospasm happens without links to any other conditions or diseases. Symptoms appear spontaneously and are believed to be caused by changes in brain chemistry. However, more research is needed to confirm this theory.

BSP is somewhat rare, with around 2,000 people being diagnosed within the U.S. each year.

Unlike BSP, benign essential blepharospasm (BEB) is its own neurological condition.

It is a type of dystonia, which is a group of neurological disorders that cause involuntary muscle contractions. The contractions can twist muscles in the affected area into unusual, and sometimes uncomfortable, positions.

Dystonia that targets one area of the body is called focal dystonia. Benign essential blepharospasm is dystonia that focuses on the muscle around the eyes (orbicularis oculi muscle).

BEB causes the eyes to twitch, blink and close involuntarily. Episodes of muscle contractions are intermittent and may last anywhere from a few seconds to hours.

In severe cases, muscle tics can be so intense that the eyes are squeezed closed for several hours at a time. During these episodes, it can be nearly impossible for the person to lift their eyelids and open their eyes. These individuals are said to be suffering from apraxia of eyelid opening. This is the inability to lift the eyelids, or keep them lifted, and it occurs due to spasm of the pretarsal orbicularis oculi muscle.

It’s also possible for other muscles in the face to become affected, such as the jaw, mouth and tongue. When affected, people may experience involuntary jaw clenching, opening of the mouth and tongue protrusion.

Benign essential blepharospasm affects approximately 5 out of every 100,000 people.

SEE RELATED: Blinking: Frequency and why we do it

The causes of BSP are different than those of BEB. This is because blepharospasm is either spontaneous or caused by an underlying problem. However, the connection between these underlying conditions and BSP is not fully understood.

Some potential causes of blepharospasm include:

Reflex blepharospasm is usually caused by irritation in the eye. One or more of the following factors could contribute to reflex BSP:

The cause of BEB isn’t clear. Experts believe it’s related to an abnormality in the basal ganglia but have been unable to pinpoint exactly what goes wrong. Basal ganglia are a group of structures located at the base of the brain that have a part in all coordinated movements.

One theory suggests a disturbance in the brain chemicals that send information between cells. However, details on what triggers this disturbance are unknown.

Other theories behind what causes BEB include:

SEE RELATED: How does the brain control eyesight?

Symptoms of blepharospasm and BEB are very similar, which is why the conditions are often confused. Early symptoms often look different from those of progressed stages.

Early symptoms of blepharospasm and BEB can include:

People with blepharospasm or BEB often report noticing the first signs while they’re focusing on a task, such as driving or watching TV.

Progressed stages usually have more dramatic symptoms, such as:

It’s important to note that while BSP can affect a person’s ability to see, there is no functional problem with the eyeball itself. For this reason, neither blepharospasm nor BEB can cause blindness.

However, the conditions can lead to something called functional blindness. This means a person must use alternative techniques to accomplish tasks that normally require sight to perform.

A person may have 20/20 vision, but if they’re unable to keep their eyelids open long enough to drive or read, they could be considered functionally blind.

There are many theories behind what causes blepharospasm and BEB. While a definite cause has yet to be confirmed, experts have determined several triggers that can set off a BSP episode. There are also certain risk factors that make someone more likely to develop the condition.

The following factors have been known to irritate or trigger episodes of BSP:

It’s possible to fall into one of the categories below and not experience blepharospasm or BEB. However, testing has shown that the following characteristics and habits are commonly seen in people with this condition.

Blepharospasm and BEB can be diagnosed and treated by an optometrist. Surgical treatment is typically managed by an ophthalmologist or neurologist.. The diagnostic process will begin with a clinical assessment. Doctors will review the patient’s medical history and assess the symptoms that the patient experiences.

In most cases, BEB is a diagnosis of exclusion. This means doctors must rule out underlying causes to determine whether uncontrolled eye movements are the sole problem or a symptom of something else.

They may use a diagnostic method called electromyography. Electromyography tests for neuromuscular abnormalities by measuring how a muscle responds to nerve stimulation.

Once a diagnosis is made, the doctor can advise you on the best course of action for your case. Fortunately, neither blepharospasm nor BEB are life-threatening or a threat to your eye health.

However, severe cases of blepharospasm and BEB can leave a person functionally blind, which can have a serious impact on their daily life. In cases like this, it could be considered a disability. People who are unable to work productively due to their BEB symptoms may qualify for disability insurance.

While blepharospasm and BEB are not deadly, there are no cures for the disorders. There are several treatment methods that are usually successful and will likely be needed for the remainder of a person’s life.

If you’re experiencing secondary BSP, treating the underlying cause is the best place to start. This may include treatment for any eye irritation caused by dry eyes or eye inflammation. Treatment for other neurological conditions in which BSP is a symptom can provide relief.

Primary blepharospasm can be managed by avoiding or limiting your exposure to things that trigger episodes. Examples of this include:

It’s been reported that people with mild blepharospasm can calm symptoms by humming, singing, chewing gum or gently rubbing the eyelid. Recent studies have also shown acupuncture to be successful in relieving eyelid tension. Try out different techniques to see if they help calm your symptoms.

It’s rare for doctors to prescribe oral medication for BSP — mainly because it isn’t very effective.

However, some patients experience partial relief from symptoms by taking muscle relaxers or sedatives. Some examples of these include clonazepam, trihexyphenidyl, lorazepam, baclofen and tetrabenazine.

Botox injections are the most common and effective treatment method for BEB. The injection is given in or around the orbicularis oculi muscle and works by weakening the muscle to help reduce or eliminate contractions.

The dosage required depends on several factors, including severity of symptoms, tolerance, etc. Doctors usually administer between 2.5 and 5 units of product per injection site. There can be anywhere from four to eight different injection sites around the eye.

It normally takes two or three days for the Botox to “kick in” and for results to be noticed. Treatment lasts around three to four months, at which point the muscles will need to be reinjected.

The average cost of Botox is between $10 and $12 per unit. This makes Botox injections an expensive treatment option for blepharospasm.

It’s possible for insurance companies to cover the cost of Botox injections for eye twitching, but the restrictions vary between providers.

For example, Medicare will cover it, but there are certain criteria you must meet before they pay for treatment. Many providers require a referral or recommendation from an ophthalmologist or neurologist before it’s approved. Discuss questions or concerns with your insurance provider to learn specific details about your coverage.

Surgical treatment for eye twitching is extremely rare. However, when Botox injections are unsuccessful in treating BEB, surgery may be necessary. The procedure is called an orbicularis myectomy and involves removing certain parts from the eyelid muscles. While the surgery is more invasive than Botox injections, it has a success rate between 80% and 90%.

See an eye doctor if you have an eye spasm that lasts more than a few weeks or that intensifies over time. At any point, if one or both of your eyes are showing uncontrolled movements, such as blinking, winking, squinting or squeezing closed, see an eye doctor.

Finally, if you notice any sudden changes in your vision, whether accompanied by an eye twitch or not, make an eye appointment. A comprehensive eye exam can detect any problems that may affect your eyes and vision.

READ MORE: When should you worry about an eye twitch?

What is apraxia of eyelid opening and how do you treat it? Parkinson's Research Organization. February 2019.

Antibody-related movement disorders – a comprehensive review of phenotype-autoantibody correlations and a guide to testing. Neurological Research and Practice. February 2020.

What it means when your eye twitches

When should you worry about an eye twitch?