Experts say more than 90 percent of eye injuries can be prevented by simply taking a few precautions and wearing safety glasses.

If you use a lawn mower, leaf-blower, drill or similar power tools, you need protective eyewear. These glasses should have a snug, wrap-style frame to decrease the likelihood of small, airborne particles getting behind the lenses.

If you wear corrective lenses, hardware stores sell inexpensive goggles that will usually fit over your glasses. But a better and more comfortable option is to purchase a pair of customized safety eyewear with polycarbonate lenses from an

In U.S. workplaces that involve any kind of airborne particles or noxious chemicals, employers must adhere to Occupational Safety and Health Administration (OSHA) guidelines for protective eyewear and emergency eye care.

This video explains how to prevent eye injuries at home, at work and during sports.

If you or your employer is unsure of which guidelines apply to your workplace, visit the OSHA website for information on these topics:

Be sure that you fully understand the risks for eye injuries at your workplace and the most appropriate type of safety eyewear you should use. Employers also should consult with an eye doctor who is familiar with safety eyewear programs for additional insight beyond the information available from OSHA.

These are all important contributors to on-the-job eye injuries, according to a study of patients treated in the emergency department at an Alabama eye hospital. 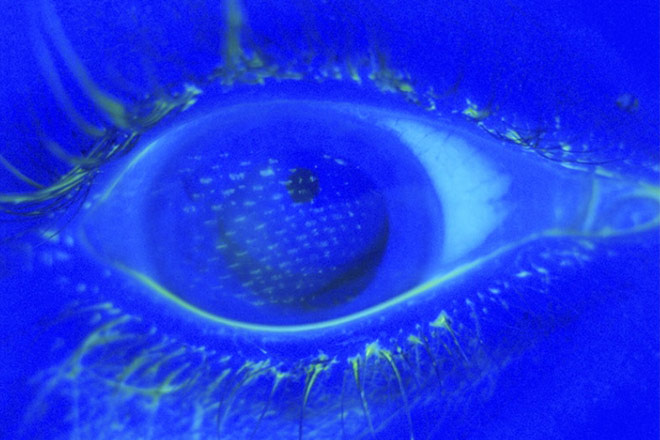 Since 1989, when air bags were first required in autos sold in the United States, these safety devices have saved thousands of lives. But there has been plenty of controversy about the risk/reward of air bags; many people have sustained significant injuries from them, and deaths have even been attributed to air bag deployment.

Newer vehicles are equipped with air bags that deploy with less force than first-generation bags, making them safer.

Though it's possible to sustain a corneal abrasion or other eye injury from your vehicle's air bags during an accident, you would be at risk of much more serious injuries (including eye injuries from a shattered windshield) without these safety devices when traveling at highway speeds.

To reduce your risk of injury to your eyes and head from air bags:

Laser pointers shine a focused beam of high intensity light, usually red, and are commonly used in corporate and classroom presentations to highlight specific points or images on media screens.

Looking directly at the light beam of a laser pointer can cause temporary vision loss and even permanent damage to the retina. This was learned after children and young adults began purchasing laser pointers and using them as toys.

Also, laser pointers began to be used as sighting devices for paintball guns. Because of the potential for eye injuries, the

In 2010, the American Academy of Ophthalmology issued a consumer warning about high-powered laser pointers that are even more dangerous than other types. The organization cited the case of a teenaged boy who suffered retinal injuries while playing with the pointer in front of a mirror. The case was reported in the Sept. 8 issue of the New England Journal of Medicine.

The U.S. legal limit for handheld laser power is 5 mW, but the injured boy had purchased a 150 mW device on the Internet. Often such devices are advertised as toys and are not labeled as hazardous.

The Academy advised not pointing lasers near the eye or near reflective surfaces.

During a celebration, you're probably not thinking about eye damage. But a flying cork from a bottle of champagne can abrade or rupture the eyeball, cause bleeding inside the eye or a detached retina, dislocate the eye's lens, damage the orbital bone structure and more. Serious vision loss can result from these injuries.

Watch this video on how to open a champagne bottle without causing eye injury. (Source: eyeSmart)

According to the American Academy of Ophthalmology, this happens more often with champagne and sparkling wine bottles that haven't been fully chilled, because the bubbles contain gas that expands when warm. This causes the corks to come out much more forcefully, at speeds of up to 50 mph. It is recommended that you chill the beverages to 45 degrees Fahrenheit or colder before you open them.

To prevent eye injury, follow these instructions provided by the Academy (or watch this how-to video):

An estimated 9,100 fireworks-related injuries (and five non-occupational deaths) were treated in U.S. hospital emergency rooms in 2018, with about 5,600 of them during a one-month study period of June 22 to July 22, according to the U.S. Consumer Product Safety Commission (CPSC).

About 1,100 of the injuries during that month were eye injuries.

The American Academy of Ophthalmology offers these safety tips for preventing eye injuries from fireworks: 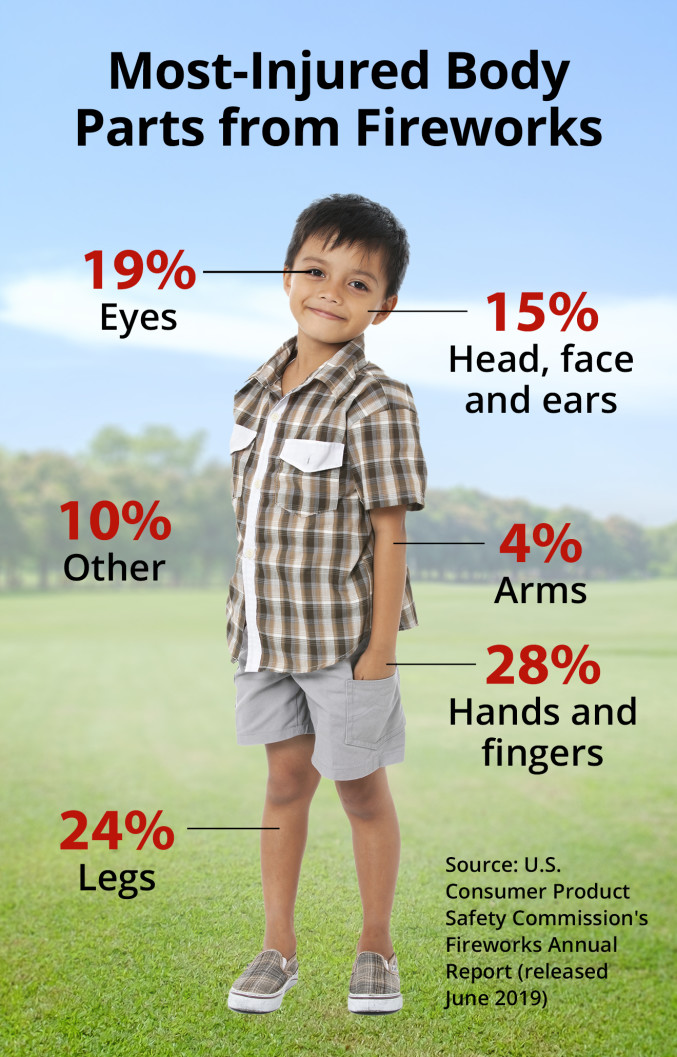 Without proper eye and head protection, people can receive devastating injuries from paintball guns. Some guns are capable of propelling paint pellets at speeds over 180 mph.

The most important rule for paintball is this: Never take off your head shield, which should combine eye and ear protection. Commercial paintball fields require that you keep a head shield on at all times when you're in the playing area, even when a game has not yet begun. Most documented paintball-related eye injuries have occurred when players removed their shields, even for just a few seconds.

If you're still not convinced of the importance of wearing protective gear while playing paintball, consider these statistics:

In a 2007 retrospective study of paintball-related eye injuries treated at Bascom Palmer Eye Institute (Miami), 86 percent (31) of the patients were men, and only one had been wearing protective eyewear. Among this group of injuries, surgery was required to treat 81 percent of the cases.

Eight eyes (22 percent) were so badly damaged that they had to be surgically removed. Even after treatment, vision was 20/200 or worse (legally blind) in 18 (50 percent) of the injured eyes, according to the study.

The common warning that you'll "put an eye out" if you're not careful actually can be true, particularly when you are engaged in certain types of work, home and sports activities. Unlike other parts of the body that can heal after a serious injury, your unprotected eye — and your vision — may never fully recover from certain wounds.

Many thanks to the NFPA and to Dr. Richard L. Gamelli of Stritch School of Medicine, Loyola University Chicago, for these valuable tips and warnings. — L.S. and N.B.

When do you need an eye exam? 5 signs it’s time

When should I replace my eyeglasses?

Toys and eye safety: Parents and kids, be careful

7 common eye injuries and how to treat them