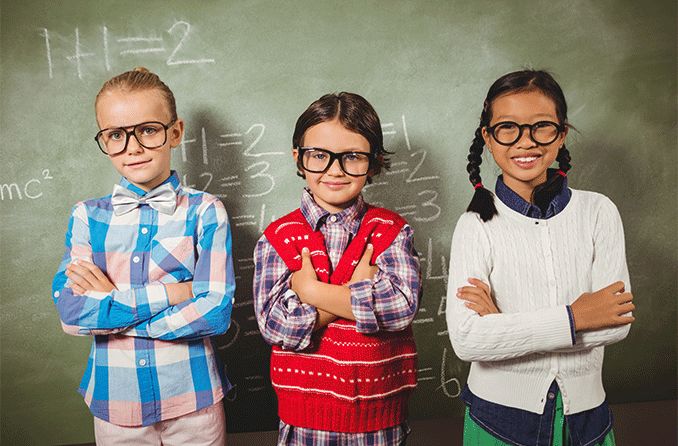 Nearsighted glasses for myopia control are eyeglasses with specially designed multifocal lenses to slow the progression of myopia (nearsightedness) in children. This innovation in eyeglass lens technology is relatively new; myopia control lenses are being developed in response to the significant increase in nearsightedness among children worldwide over the past several decades.

In the United States, research has shown the number of nearsighted people grew from about 25% of the population in the early 1970s to roughly 40% of Americans by 2004.

More recently, a review of several studies about the prevalence of myopia among schoolchildren (ages 6 to 19 years) around the world revealed:

This analysis also found that the percentage of children with myopia is highest in East Asia, where 73% of schoolchildren are nearsighted.

Why myopia control glasses are needed

Myopia (also called nearsightedness or shortsightedness) is not an eye disease. It is a common refractive error — an optical imperfection of the eye that causes blurred vision and can be treated with corrective eyeglasses or contact lenses to restore clear, comfortable eyesight.

(The other two primary refractive errors of the eye that affect children and young adults are farsightedness and astigmatism.)

Though it’s not an eye disease, myopia — especially nearsightedness that develops at an early age and gets progressively worse throughout childhood — significantly increases a child’s risk of serious eye health problems later in life, including:

And the increased risk of these sight-robbing conditions and eye diseases caused by childhood myopia can persist after nearsightedness is corrected — even if it’s permanently treated with LASIK or other vision surgery.

This is why routine eye exams are so important for all children. If nearsightedness is detected early and treated with lenses specially designed to control myopia, the risk of vision loss from serious eye problems later in life can be significantly reduced.

Essilor is a leading eyeglass lens manufacturer that’s on the forefront of developing nearsighted glasses to slow the progression of myopia in children.

The Stellest lens is the culmination of more than 30 years of academic studies, product design and research collaboration with top myopia experts and research institutes, Essilor says.

The H.A.L.T. technology in Stellest lenses consists of a central zone for clear far vision, surrounded by 11 rings of aspheric “lenslets” that alter how the peripheral part of the lens bends the light that’s entering the eye. This unique multifocal design reduces the tendency of the eyeball to grow longer in childhood, which causes nearsightedness to worsen.

In a report published in September 2020, Essilor released interim results of a three-year clinical trial of 167 nearsighted schoolchildren that the company conducted with its key research partner, Wenzhou Medical University, in China.

The children in the study were between 8 and 13 years old and were divided into a treatment group that wore Stellest multifocal lenses and a control group that wore standard single vision lenses for myopia correction.

Key interim findings of the study after one year revealed:

These preliminary results of the clinical trial of Stellest lenses at Wenzhou Medical University Eye Hospital in China produced extremely positive feedback from parents and children alike, according to Essilor.

The company said it is planning a broader rollout of Stellest myopia control lenses in other hospitals in China, followed by launches in several other countries.

[NOTE: Bookmark this page and check back for future updates about glasses with Essilor’s Stellest myopia control lenses to slow the progression of nearsightedness as they occur.]

Nearsighted glasses with myopia control lenses are one of several methods used to slow the progression of nearsightedness in kids.

To make sure your child’s eyes and vision are developing properly and to reduce the risk of myopia progression during childhood, schedule children’s eye exams at the following intervals:

For specialized eye care for children — including the latest myopia control treatments — consider scheduling these exams with a pediatric optometrist or a pediatric ophthalmologist.