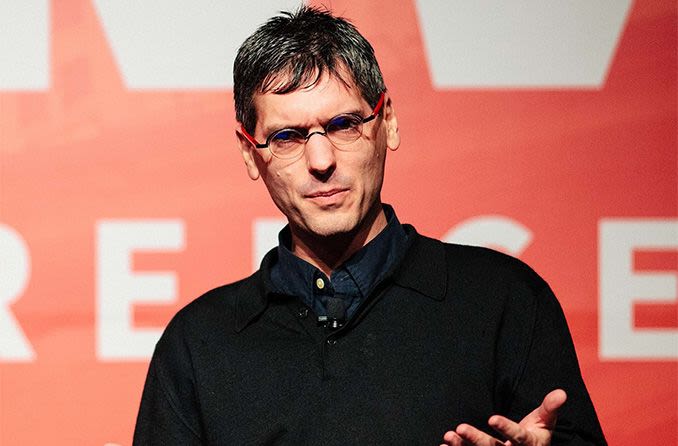 If you want to find technology executive Tristan Louis in a crowd, look for the red glasses.

“People talk to me because of them,” says Louis, who co-founded six companies and is now CEO of Casebook PBC. He describes his Alain Mikli frames as “a work of art and a marvel of engineering.”

To say he likes his glasses is an understatement.

“Is it possible to fall in love with an inanimate object?” asks Louis. “If you're talking about a particular pair of glasses, I would venture it is.”

As a teenager, Louis realized his vision was going south, and it was affecting both his academic and social life.

“I was having difficulties in school,” he says. “To see better I just moved closer and closer to the front row, which is not the place for popular kids! Pretty soon there was nowhere else I could go.”

To address Louis’ myopia (or nearsightedness), he was fitted with his first pair of prescription eyeglasses. Stylish they were not.

“They were pretty horrendous,” Louis says. “This was in the early 1990s, so I got the classic large frames, with the big, ugly wires. Yes, I chose them, but I was relatively clueless about such things back then.”

After that came about a dozen different eyeglass frames. Some were fine, but none inspired an emotional reaction.

The man in the red eyeglasses

Then, in 2007, Louis spotted a pair of glasses by Alain Mikli, the avant-garde French-Armenian designer of precious, handmade eyeglasses. 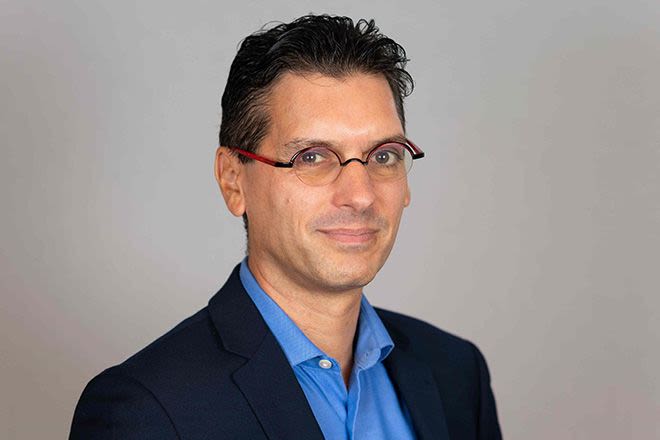 “They were fascinating!” he says of the glasses that caught his eye in a store window. “The lenses were somehow hanging off the frames, and they were slightly separated. They seemed to be held together only by the nose piece. I had never seen anything like them before.”

When Louis tried the glasses on, he knew he had found the perfect pair for him.

“Right away they suited me,” he says. “The frames were visible yet somehow disappeared when looked at straight on. And the branches were a super bright red. It was the whole combination of factors that I immediately fell in love with.”

Louis bought the frames, which cost somewhere between $500 and $600.

He gushes now about the complexity of the design of the frames. “They are super complex,” says Louis. “I think about all the things they had to go though, the level of care and attention to build such a beautiful object. I still don’t know how they manufactured such an incredible object.”

How glasses fit his lifestyle

“Being involved in cutting-edge technology, I felt I needed to make a statement,” Louis says. “I had to feel comfortable with that. My frames soon became a part of my brand.”

Conversations started and relationships formed because of the stand-out red frames.

“People talk to me because of them,” Louis says. “They are definitely the kind of frames that attract attention. On a regular basis, total strangers come up to me and tell me they love my glasses.”

Extending the life of old frames

Unfortunately, even the highest quality frames wear down when they’re worn for a decade.

“They were getting old,” Louis says, adding that one of the branches broke. “I didn’t know what to do, because even though I found a similar pair in a different color, they weren’t the same.”

Ditching the precious Alain Mikli’s was not an option. Louis had to find a way to keep them going.

“Thankfully, I found a company that restores frames,” Louis says. “That was an awakening for me!”

Louis had the branch fixed and polished. The metallic red and black paint that was chipping after years of use was touched up. For a few hundred dollars the red frames looked like new.

Now, whenever Louis has issues with his frames, he takes swift, sometimes do-it-yourself, action.

Recently, when a piece of metal separated from the plastic, he fixed his frames with crazy glue.

Whatever it takes to keep his beloved glasses in working order, he’ll do.

Louis, who is clearly sticking with his red frames for the long haul, updated and upgraded his lenses with funds from his tax-free health savings account (HSA).

As for a separate pair of sunglasses, he doesn’t need or want them. The lenses in his red frames are Transitions, so they darken in sunlight.

They serve a dual purpose: The red frames get looks and the best lenses and coatings help Louis to see clearly.

“The reason I haven’t found a replacement for these is simple: They’re the best I’ve found,” Louis says. “They complement who I am and my image.

“When I look at other frames, they’re just not ‘me,’” he adds. “Not in terms of fit but in terms of what I think of myself as, my lifestyle, and how they complete my face.”

READ MORE: Why red sunglasses are always in vogue