Why does Santa wear glasses? 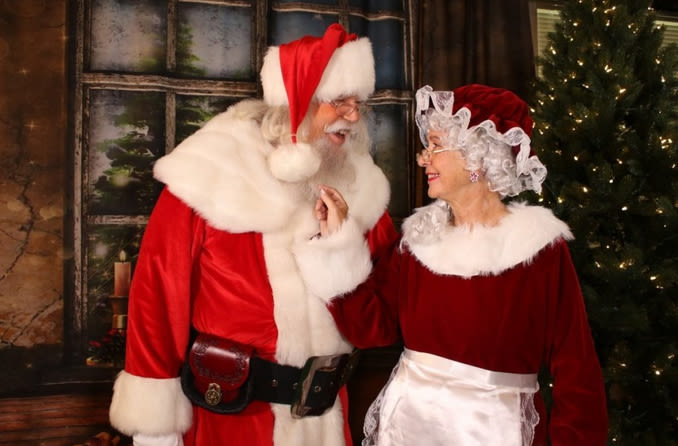 Why does Santa wear glasses? We asked a few real-life Santas and Mrs. Clauses, and the jolly old elves say they need their specs to see and read children’s wish lists.

The grandfatherly symbol of seasonal generosity with the snow-white beard and wire-rim spectacles is actually a relatively recent reboot of St. Nicholas (or Sinter Klaas, as he’s known in the Netherlands).

St. Nick, who died in 343 A.D. at age 73, was beloved for freely sharing his inherited wealth with the less fortunate. But he probably didn’t wear glasses — St. Nick lived before eyeglasses were invented (see A history of eyeglasses).

Most credit the modern-day, red-and-white remake of jolly old St. Nick to German-born American artist Thomas Nast, who fashioned 33 images of him over two decades for Harper’s Weekly magazine from 1863 to 1886.

Over the next century, Santa donned glasses, like much of mature America, as a newly invented vision aid and status symbol. In 20th-century America, glasses were a natural fit for an older gent with so many lists of naughty and nice kids to manage.

Today, the thousands of Santas and Mrs. Clauses who dedicate their time and talents to making the season bright often don the distinctive “Santa glasses” as costume props, vision aids or both before they step into their sleighs.

So why does Santa wear glasses (and not contact lenses)? And where does he get them? We asked a few Santas and Mrs. Clauses. 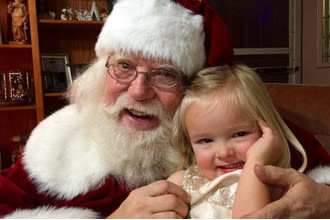 That’s right: This Santa was legally blind. With normal 20/20 vision, you can read an eye chart at 20 feet, whereas with 20/200, your vision of that eye chart would approximate someone with 20/20 vision reading a chart 200 feet away, the minimal definition of legal blindness.

Santa, you see, has presbyopia. His age-related farsightedness is a common reason for many Santas to wear glasses, whether or not they’re onstage.

“Because most of the Santas are getting up there in age, the kids would always give us all these little things to read and we couldn’t read ’em. So we started getting really, really small prescription glasses, and they’ve become part of the costume,” Santa Roger says. “I would probably say that about 65-70% of us have prescriptions.” 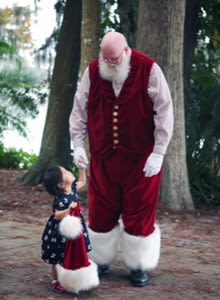 Santa Ernest Tedrow, who manages condominiums and high-rises in the Miami area, has been hoisting kids onto his lap for eight years. Why did this Santa need glasses?

“Because he was old!” he laughs. “I didn’t start wearing glasses until I was almost 55, and it was just for reading.”

Although Santa Ernest uses his readers offstage, this Santa’s specs are just costume. “There are several websites that have different types. I bought five or six different pairs. They’re not prescription; they’re just regular because I only use glasses for reading, so it was easy.”

That said, he’s found a way to work them into his program to benefit his lap crowd.

“The kids are more fascinated with my real beard than anything, but what I do is, any child that is wearing glasses, I make a comment about how pretty they are and ask, ‘Gee, do you like my glasses?’ so that they feel more at ease about it. That gets them talking.” 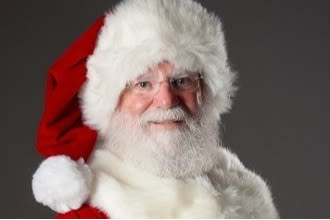 “Believe it or not, in the later years, I wanted the smallest glasses to minimize the weight on my nose, and I’ve always liked gold because it was similar to my skin tone. So I just naturally had a Santa-looking pair of glasses since I’ve been in readers,” he admits.

At appearances, his eyewear takes second stage to his homegrown attraction. “I have very few kids try to grab my glasses because they always go for the beard,” he says.

Where does Santa Vince score his lenses?

“Finding the traditional Santa glasses with prescriptions above -3.5 [for myopia] was very difficult actually. I recently got some from some of the companies on Amazon: the round traditionals, the ovals and the rose-colored. So I’ve got three backup pairs for this Christmas. You can’t get caught without them,” he says.

So why does Santa wear glasses?

“Because of hundreds of years checking the lists, he needs to focus closely at the right time. And all the toymaking too — [it put] strain on the eyes under candlelight.”

So now that we know roughly how Santas choose to see clearly during the holidays, what about Mrs. Claus? After all, she’s the toymaker, cookie baker and Christmas story reader of the pair. How does she handle the close-up eye strain? 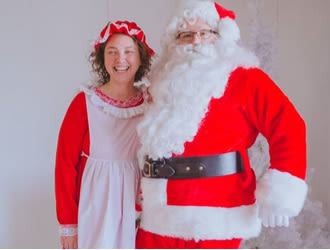 When Mrs. Claus Kristina Canfield, of Cedar Rapids, Iowa, dons her seasonal costumes with husband Santa Chad, she finds herself in and out of spectacles.

“Santa does wear glasses all of the time and he has never had any issues with them while visiting with children,” she adds. “Most children are most interested in Santa's beard.” 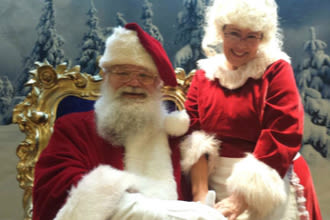 “I got my first progressive lenses this year from Costco and you know what crossed my mind? Being Mrs. Claus has shaped the glasses I choose, because I chose some pink metal frames with sparkly diamonds on them,” she says. “Not only do I love the sparkle but it’s like I can wear these as Mrs. Claus too.”

While this Santa and Mrs. Claus both need reading glasses for their respective roles, boring never fit well in Mrs. Claus Elise’s playbook.

“We know a lot of Santas and Mrs. Clauses out there and all the ones that I know do wear glasses. When I first started out, I wore cheap reading glasses just so I could have the look and wear them down on my nose. It’s kind of just part of the gig, but I always wanted them to look really fun,” she explains.

“Well, now that I’ve chosen pink for both my reading glasses and my regular glasses, I think the kids will think that I’m the coolest Mrs. Claus.”

Who has the best deals on kids’ prescription glasses?