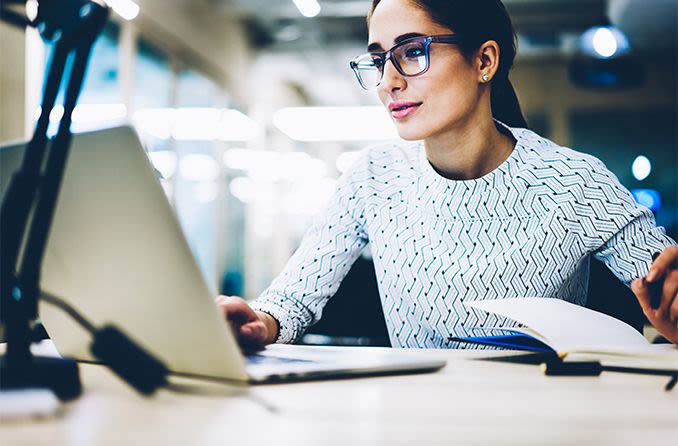 Photochromic lenses, which are transparent when worn indoors but darken when exposed to sunlight, also help reduce digital eye strain often caused from staring at a computer all day.

You also may rest easier with photochromic lenses, as they block blue light from your digital screens. Blue light can interfere with melatonin, which regulates the body's sleep cycle and circadian rhythm.

What are photochromic lenses made of?

Photochromic lenses are made of molecules composed of trace amounts of silver chloride (the same chemical compounds used to develop film). When this silver chloride is exposed to ultraviolet light, the molecules become silver metal, allowing the lenses to absorb visible light and turn darker in the process.

Unlike film exposure, photochromic lenses are also made with copper chloride, which strips the silver of its chloride electron. This allows the lenses to return to their original, non-absorbing state in the absence of ultraviolet light.

The difference between photochromic and Transitions lenses

Let's take a closer look at the differences:

Traditional photochromic lenses are made of plastic, glass or polycarbonate and change from transparent lenses to darker lenses when exposed to sunlight.

Photochromic lenses are available in virtually all lens materials and in a variety of tints made for general-purpose lenses as well as contact lenses. Some sunglasses manufacturers even make tinted lenses that go from dark to darker shades rather than from clear to dark.

Transitions lenses are the most popular brand of photochromic eyeglass lenses sold in the United States. So some eye care practitioners even use the term "transition lenses" interchangeably with photochromic lenses (much like cotton swabs are almost universally known as Q-tips).

Transitions Gen 8 lenses, introduced in the U.S. in 2019, are the fastest light-adaptive Transitions lenses available.

So, are photochromic lenses good for computer use?

Photochromic lenses are an excellent solution to guard against computer vision syndrome.

Bonus: Photocrhomic lenses work just as well as regular sunglasses for outdoor use. They shield your eyes from harmful blue light exposure as well as 100% of the sun’s harmful ultraviolet rays.

ARE PHOTOCHROMIC LENSES ARE RIGHT FOR YOU? Book an appointment with a vision specialist near you.

How to Read Your Eyeglasses Prescription

Which eyeglass lenses are best for me?

Progressive lenses: No-line multifocals for a younger you

Polycarbonate vs. Trivex eyeglass lenses: Which are right for you?