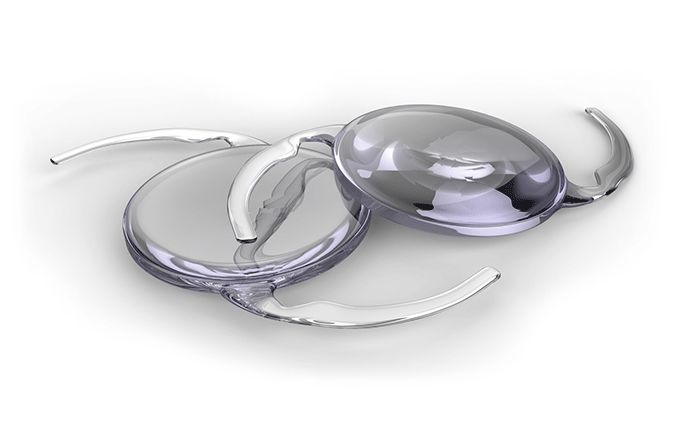 What is monovision cataract surgery?

Monovision cataract surgery replaces the natural lens with an intraocular lens (IOL) that corrects for distance vision in one eye and for near vision in the other eye. The brain switches between the eyes as a person’s gaze shifts. This provides clear, glasses-free vision for most activities.

How does monovision cataract surgery work?

In cataract surgery, a cloudy natural lens is replaced with a clear artificial lens called an intraocular lens (IOL). A monofocal lens is the most commonly implanted IOL. It provides clear vision at one focus only, usually distance.

In monovision cataract surgery, one IOL is set for distance, and one is set for near. Your doctor will perform a few tests to determine your “dominant eye.” The dominant eye is typically chosen for the distance IOL, and the other eye for the near IOL.

After the brain adapts to filtering out the blurry image, this provides clear vision for most activities. Glasses may still be needed for detailed near work or computer work and for night driving.

Who is a good candidate for monovision cataract surgery?

For people who have adjusted to monovision, monovision cataract surgery allows them to see clearly without glasses for the majority of their tasks. Good candidates for this surgery are people who:

How do I know if I can adjust to monovision?

Many people successfully adapt to monovision as the brain learns to suppress the image from the eye that is blurry. Before choosing monovision cataract surgery, your cataract surgeon will recommend that you try monovision contact lenses. It usually takes a few weeks to months to adjust to monovision. During this period, you may experience:

Over the past 20 years, premium IOL technology has provided more options for glasses-free vision. In addition to monovision IOLs, accommodating IOLs and multifocal IOLs can be chosen to correct presbyopia.

Accommodating IOLs use the movements of the eye’s muscles to change focus from distance to near. Some people find that they still need reading glasses for detailed work. Also, accommodative IOLs may become less effective over time.

Multifocal IOLs provide several zones of focus for clear vision at distance and near. However, distance vision is sometimes compromised for clearer near vision. Glare and halos around lights can also be caused by accommodating and multifocal IOLs.

A combination of a premium IOL in one eye and a monofocal IOL in the other eye has been used with some success.

Monovision refractive surgery uses monofocal IOLs, so it costs less than premium IOLs. It is a good option that can provide glasses-free vision for people who can adjust to suppressing the blurry image from one eye.

Pseudophakic monovision is an important surgical approach to being spectacle-free. Indian Journal of Ophthalmology. November 2011.

Multifocal intraocular lenses: Types, outcomes, complications and how to solve them. Taiwan Journal of Ophthalmology. December 2017.

What is posterior capsular opacification (PCO)?

What is refractive cataract surgery?

A complete guide to the different types of cataracts