A guide to protecting your eyes and vision while protesting 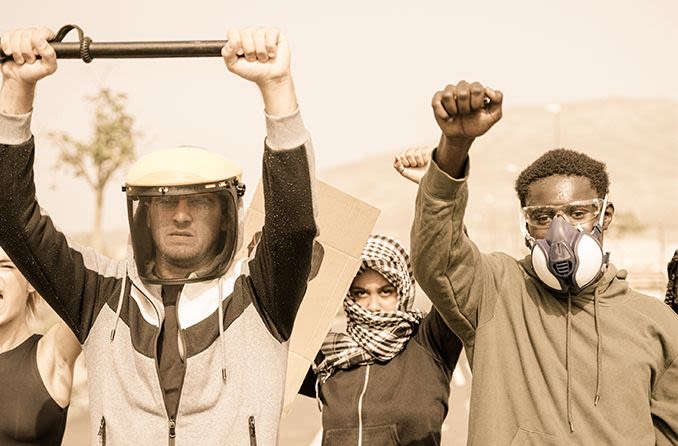 In recent weeks, protests against racial injustice have spread across the country and around the world. So has the use of rubber bullets and tear gas to control crowds.

The American Academy of Ophthalmology (AAO) recommends that protesters put on protective eyewear — beyond regular eyeglasses or sunglasses — made with shatter-resistant polycarbonate lenses to shield them against threats like rubber bullets and tear gas.

The organization cautions, though, that goggles, safety glasses and other protective eyewear don’t always provide full protection. Read on for more information about the dangers presented to your eyes and how best to protect your vision.

Keep your eyes safe when protesting

Amnesty International recommends a number of precautions to take before you head out to protest, including a number of safety measures to protect your eyes.

They recommend wearing “shatter-resistant eye protection (e.g., sunglasses, swim goggles or gas mask) and an N95 facemask” [remember, we’re also still in the middle of a pandemic], as well as “a hat to protect you from the sun and from chemical weapons.”

If you wear contact lenses: “You must remove the lenses or get someone to remove them for you, with CLEAN, uncontaminated fingers. Destroy the lenses after exposure and DO NOT RUB [your eyes]. Use an eye flush using a solution of half liquid antacid and half water. This only applies to aluminum hydroxide or magnesium hydroxide.”

Dr. Tanya Khan, an ophthalmologist in Austin, Texas, notes that protective eyewear should fit securely around the sides, bottom and top to be the most effective “Protesters may also consider carrying eye wash and artificial tears to alleviate surface stinging from noxious gas exposure,” says Khan.

Dr. Khan says that aside from blindness, eye injuries that protesters might experience include:

“As [tear gas] penetrates the deeper tissues in the eye, it can cause irreversible scarring of the fluid-drainage pathway of the eye, the lens and even the nerve tissue at the back of the eyeball. These changes can lead to traumatic cataracts, glaucoma and retinitis,” Khan says.

SEE RELATED: 7 common eye injuries and how to treat them

The case against rubber bullets

Now, the AAO and seven other medical organizations have called on law enforcement agencies to immediately halt the use of rubber bullets to control or disperse crowds of protesters due to the potential for eye injuries.

“Americans have the right to speak and congregate publicly and should be able to exercise that right without the fear of blindness. You shouldn’t have to choose between your vision and your voice,” the AAO said in a June 4 statement.

The AAO points out that while rubber bullets are characterized as nonlethal, some protesters have been blinded after being hit by these bullets. Health care professionals believe these bullets should be branded “less lethal” rather than nonlethal.

On June 13, the Wall Street Journal reported that at least 20 people had suffered traumatic eye injuries in the U.S. after being struck by rubber bullets and other projectiles during protests spurred by the death of George Floyd, a black man, while he was pinned down by a white police officer in Minneapolis.

Kaiser Health News says that seven of those cases involved the loss of an eye.

“These life-altering eye injuries are a common result of urban warfare, rioting and crowd dispersion. We have seen it around the world, and we now see it in the United States,” the AAO said.

Siding with the AAO on the stance against rubber bullets are the:

The no-rubber-bullet stance aligns with a study released in 2017. The study, appearing in the medical journal BMJ Open, tracked data published between 1990 and 2017 about 2,135 injuries caused by the firing of rubber bullets, beanbags and similar projectiles in a number of countries. The study found that 3 percent of people hurt by the projectiles died from their injuries and another 15.5 percent were permanently disabled. Blindness was one of the common disabilities.

“Given their inherent inaccuracy, potential for misuse and associated health consequences of severe injury, disability and death, [rubber bullets and similar projectiles] do not appear to be appropriate weapons for use in crowd-control settings,” the researchers wrote. “There is an urgent need to establish international guidelines on the use of crowd-control weapons to prevent unnecessary injuries and deaths.”

“Just like a real bullet, from a medical perspective a rubber bullet is what we describe as a missile,” Dr. Ian Wittman, chief of emergency medicine at NYU Langone Hospital-Brooklyn, told The New York Times. “In this case the target is a human body, so it can still cause really significant injuries.”

Dr. Benjamin Ticho, associate professor of ophthalmology at the University of Illinois at Chicago Medical School’s Eye & Ear Infirmary, says one demonstrator treated recently in the Chicago area suffered a “nasty” corneal scratch after her eye was scraped by another demonstrator’s cardboard sign.

“You might think that another part of your anatomy is the most sensitive part, but the cornea has more pain receptors per millimeter than anywhere else in the body,” Ticho says.

READ NEXT: Jalapeño in the eye? Don’t use milk!

Wildfire smoke and your eyes

How to safely remove something from your eye

Why it's bad to rub your eyes