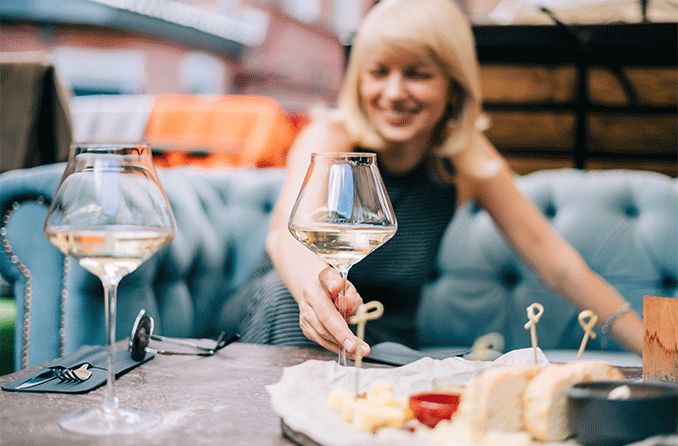 Alcohol and your vision

The effect of alcohol on your eyes and vision depends on many factors, including how much, how often and even what you drink. It can have both short- and long-term visual effects, including blurry vision, double vision and dry eye. Even the occasional drink can affect your eyes in some ways.

Short-term effects of alcohol on the eyes and sight

When you drink alcohol, your vision may change in various ways during and shortly after drinking. For example, researchers found that people who have been drinking are likely to rate images as more attractive, widely known as the "beer goggles" effect.

Here are some other ways drinking alcohol may affect your eyes and your vision right away:

Drinking large amounts of alcohol may temporarily but significantly increase the size of your pupils, though effects can vary from person to person.

Research has shown that color vision gets worse an hour to two hours after drinking alcohol. There may be long-term effects on color vision as well: One study found that young adults who drink alcohol, even occasionally, did worse on color vision tests than those who don't drink at all.

Drinking alcohol can cause double vision (diplopia). While double vision from drinking is a temporary effect, this is just one of the reasons that drinking and driving can be so dangerous.

SEE RELATED: Why would someone's vision only get blurry at night?

A large study investigating the effect of alcohol on dry eye disease found that women have a significantly higher risk of experiencing dry eye symptoms after alcohol use as compared with men. In fact, drinking alcohol did not cause any increase in dry eye symptoms for men.

One study found that having a 0.08% blood alcohol level (the legal limit for driving in most states) can affect various types of eye movements in healthy young adults. The presence of a specific type of nystagmus (rhythmic involuntary eye movements) can actually help police decide whether to arrest a driver for drinking and driving.

The horizontal gaze nystagmus (HGN) test is one of three main sobriety tests police use. In the HGN test, the officer will ask the driver to take off their glasses and follow an object with their eyes. The eyes of a person who is over the legal blood alcohol limit will be more likely to:

The other two main sobriety tests police use are the Walk-and-Turn (WAT) test and the One-Leg-Stand (OLS) test. These tests involve walking in a straight line and standing on one leg.

One or both of your eyes may twitch during or after drinking alcohol. While there are many causes of eye twitching, it may be wise to cut back on drinking for a while if you develop an eye twitch that may be alcohol-related.

A Journal of Ophthalmology study found that night vision gets worse after drinking in both men and women. The more alcohol the subjects drank, the worse their vision became under low-light conditions. They saw halos and starbursts, had difficulty seeing contrast, and experienced longer recovery time after a bright light was shined in their eyes.

Alcohol’s long-term effects on your eyes and vision

Alcohol may also affect your eyesight in the long term, going beyond temporary symptoms to influencing your likelihood to develop serious eye conditions.

The risk of developing age-related cataracts changes based on the amount of alcohol a person drinks. An Optometry and Vision Science study found that moderate drinking may have a protective effect against cataracts. The study also found an increased risk of developing cataracts among heavy drinkers — those who drank more than two drinks (20 grams of alcohol) a day.

A large longitudinal study published in 2021 similarly showed a link between low to moderate wine drinking and a lower risk of developing cataracts that required surgery.

There may be an association between increased alcohol consumption and geographic atrophy, a form of advanced age-related macular degeneration (AMD). However, simply reducing alcohol intake may not be enough to prevent geographic atrophy. More research is needed on the topic.

Chronic alcoholism can lead to liver damage and eventually alcohol-related liver disease (or ALD). One of the most noticeable signs of ALD is jaundice, which is a yellowing of the eyes and skin. Types of ALD include alcohol-related cirrhosis, alcoholic hepatitis and alcohol-related steatohepatitis.

Alcohol can trigger an immediate migraine in some people or cause a "hangover migraine" later, according to the American Migraine Foundation.

Red wine is one of the most commonly reported migraine triggers, but researchers have yet to understand exactly what it is about red wine that causes headaches. Further investigation is needed.

The AMF states that it may be OK to drink a small drink (about 5 ounces) occasionally if doing so doesn't trigger a migraine.

There are two types of optic neuropathy: toxic (caused by a harmful substance) and nutritional (caused by nutritional deficiencies). Optic neuropathy is a general term for damage to the optic nerve, which connects the eye and the brain. It carries information between them and plays an important role in vision.

Symptoms of optic neuropathy may include:

Casual drinking likely does not cause toxic optic neuropathy. But long-term alcoholism can cause nutritional deficiencies (such as B12 and folate deficiency) and gut absorption issues. Both of these can lead to the development of nutritional optic neuropathy over time.

If you have any eye problems you worry may be related to drinking, talk to your eye doctor. They can do a comprehensive eye exam to look for signs of cataracts, macular degeneration and other problems.

They may also be able to point you to resources to help you cut back or quit drinking to help you improve the health of your eyes and your overall well-being.

The relationship between alcohol consumption and dry eye. The Ocular Surface. July 2021.

The many paths of acute optic neuropathy. Review of Optometry. May 2012.