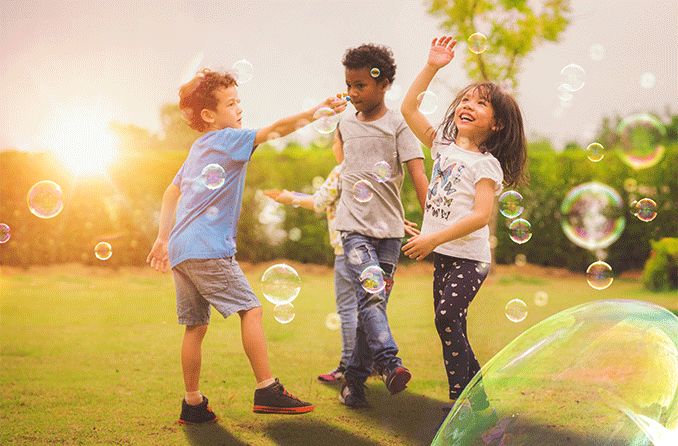 Is myopia more genetic or environmental? This is myopia’s great nature vs. nurture question. Myopia is due to a complex interaction of genetic and environmental factors unique to each individual. In other words, both factors affect individuals to differing degrees.

Here’s a look at the latest research about the role of genetics and environment in myopia, and what scientists have learned from these studies.

Several environmental factors may contribute to the development of myopia. These factors include:

The Consortium for Refractive Error and Myopia and 23andMe combined their research in a genome-wide association study meta-analysis. They concluded that environmental factors play a significant role in the development of myopia.

The simultaneous rise in rates of myopia and near work (and screen time) in the last few decades supports this theory.

A lack of outdoor light exposure

Growing research has shown that myopia is more prevalent in children who have less outdoor light exposure. In other words, when children don’t get enough time outside, they have an increased risk of becoming nearsighted.

A 2020 myopia study looked at the interaction between genes and environment in Chinese children aged 6 to 9 years old. Time spent on homework and looking at screens had a higher association with myopia than any other factor. This was true even when the role of genetics was taken into account.

The International Myopia Institute (IMI) has identified factors that may contribute to the risk of developing axial myopia (the most common form of childhood myopia). These include doing near work:

Other studies have also pointed to excessive near work at close distances as a possible risk factor for myopia development. But the data correlating too much near work with myopia has been conflicting. Researchers have found an association between myopia development and extended near work. However, they don’t know if near work is the exact cause.

Still, the close association between environmental factors and myopia development is widely acknowledged by vision scientists. This is apparent in the number of studies being done on whether COVID-19 quarantine has resulted in higher myopia rates in young children. Online learning and fewer outdoor activities are the reasons most often cited in these studies.

Genetics also play a large role in the development of myopia. One of the strongest cases for a genetic role in myopia is the clear association between myopic parents and myopic children. Children who have two myopic parents are more likely to be myopic.

Researchers recently conducted a review of myopia prevalence around the world. They found that the risk of myopia was three times higher in children who had parents with myopia than in those who didn’t.

Genome-wide association studies have identified over 200 genes associated with myopia. How these genes cause myopia is not yet clear. These studies suggest that myopia results from the interaction of many genes. And each of these genes contributes a little bit to myopia onset or progression.

Myopia is the result of both environment and genes

Vision scientists have also analyzed thousands of families (and twins). They found that environmental triggers may affect how myopia genes are expressed. For example, some studies found that genetics, combined with higher education, resulted in a higher risk of myopia development than any other single factor.

Another study looked at the effect of sports and outdoor activities on children who had:

Studies of Alaska Native parents and children have found that their heritability of myopia was only 10%. Yet, a separate study of female twins found that the association was 98%.

According to the IMI, only 5% to 35% of the variation in myopia can be explained by genes, and the heritability of myopia is probably between 60% and 80%. Vision scientists have speculated that this wide range may result from environmental influences.

Ethnicity and location may be associated with myopia development

Studies in Australia and the US suggest that ethnic background may have a role in myopia development due to both genetics and lifestyle. These studies found that children of Asian descent were more likely to be myopic. The studies also cited that Asian children get about seven fewer hours of outdoor time per week than Caucasian children.

A 2011 UK study looked at nearly 3,000 students aged 12 and 13 in Birmingham, England. They found that second- and third-generation British South Asian children had higher levels of myopia. Their classmates with white European ancestry had lower levels of myopia.

The children of different ethnicities presumably grew up in a similar environment, and any differences in lifestyle and environment were taken into account. These findings suggest that the genetics of certain ethnicities could play a role in whether myopia is developed.

A meta-analysis of 50,000 adults in 34 Asian and European countries provides additional evidence for this theory. It found a higher correlation between near work and genetics in Asians rather than Europeans.

Another study published in 2021 provides further support. The prevalence of myopia has soared in Asian schoolchildren. Yet Scandinavian school children have continued to have low rates of myopia.

The researchers analyzed the refractive error, axial length, parents’ incidence of myopia, time spent doing near work, and time spent outdoors. They too concluded that genetics, specifically due to ethnicity, may play a role in myopia development.

Socio-economics was also cited as a factor. Other studies have shown children living in urban areas have an increased risk of myopia. These areas have high population density and pollution, which may result in children spending less time outdoors.

In general, the younger a child is when they develop myopia, the more likely they are to have high myopia later in life. This leads to a greater risk of developing vision-threatening complications from high myopia, such as:

It’s very important, then, to make lifestyle modifications that may decrease the risk of myopia development. You should try to:

READ NEXT: Can you prevent myopia?

Time spent outdoors in childhood is associated with reduced risk of myopia as an adult. Scientific Reports. March 2021.

The association between near work activities and myopia in children—A systematic review and meta-analysis. Plos One. October 2015.

Association between parental myopia and the risk of myopia in a child. Experimental and Therapeutic Medicine. April 2015.

Prevalence of myopia in children and adults in Europe and North America. Optometry and Contact Lens. Accessed November 2021.

Global variations and time trends in the prevalence of childhood myopia, a systematic review and quantitative meta-analysis: implications for aetiology and early prevention. British Journal of Ophthalmology. February 2015.

IMI prevention of myopia and its progression. Investigative Ophthalmology and Visual Science. April 2021.

Association between digital smart device use and myopia: a systematic review and meta-analysis . The Lancet Digital Health. December 2021.

Media use in school-aged children and adolescents. American Academy of Pediatrics. November 2016.

Can nearsightedness be a good thing?

Myopia in children: Is your child at risk?

Infographic: What You Should Know If Your Child Is Nearsighted

Is myopia considered a disability?