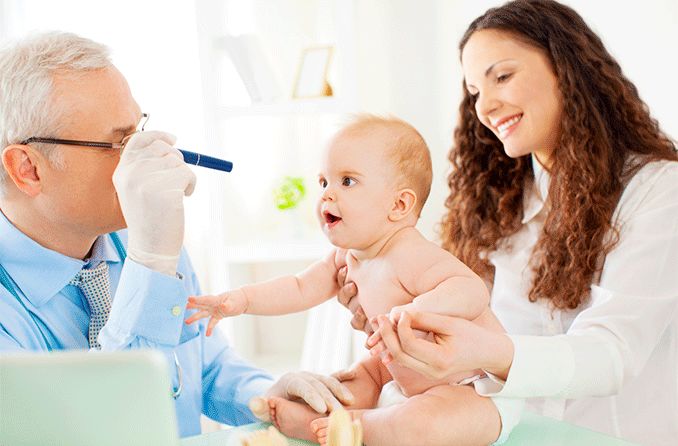 Babies move their eyes to follow objects such as toys and people around them — this is a normal part of the vision development in an infant. However, if your child’s eyes appear to be moving at a constant, erratic rate, it could be an indicator of something else: nystagmus.

Nystagmus in infants is estimated to occur in one in 5,000 births, and is typically onset between 6 weeks and 6 months of age, although the condition can also develop later in babyhood and childhood, due to other causes, including trauma, cataracts and more.

There are two main classifications of infantile nystagmus: congenital (present at birth or occurring within 6 months of age) and acquired (occurring at age 6 months or older). Depending on individual development, each type may appear and/or be treated differently.

Infants with this condition typically experience one of two main types of nystagmus: jerk nystagmus (eyes quickly move in one direction, followed by slow movement in the opposite direction) or pendular nystagmus (eyes move at equal velocity in each direction).

Congenital sensory nystagmus occurs when the child has abnormal vision, due to something interfering with visual information reaching the brain. This is called an afferent sensory defect because it involves incoming sensory (in this case, visual) information on its way to the brain.

Causes include congenital cataracts, problems with the retina or optic nerve, and severe refractive errors.

Congenital sensory nystagmus usually occurs at around 2 to 3 months of age and continues throughout life, according to the American Academy of Pediatric Ophthalmology and Strabismus (AAPOS).

If a child shows general symptoms of nystagmus in their first few months of development, they should be medically evaluated to determine the reason.

If medical testing rules out the underlying conditions associated with congenital sensory nystagmus, and the brain and vision system prove to be otherwise healthy, it can then be determined that the child has congenital motor nystagmus.

Acquired nystagmus in babies occurs at least several months after birth, with some cases occurring as early as 6 months old. There are a number of causes for acquired infantile nystagmus, from eye and head trauma to brain abnormalities and even reactions to certain medications.

The most efficient way to determine the underlying cause of acquired infantile nystagmus is through medical testing, including bloodwork and/or an MRI scan.

What does nystagmus look like in babies? The primary symptom that could indicate nystagmus in an infant is jerky or random eye movement.

It’s important to note that the frequency and intensity of these movements can vary in each individual infant, and movements are typically absent when the infant is asleep.

In addition to constantly moving or jerking eyes, some key symptoms of infantile nystagmus can include:

Some nystagmus symptoms may not appear until several months into childhood development. If symptoms occur after infancy, it could be the result of an underlying condition.

Nystagmus in infants can be congenital (occurring at birth) or acquired, though congenital nystagmus occurs more often than acquired nystagmus

Congenital nystagmus generally occurs sporadically in infants, but multiple members of the same family have been known to share the condition, and some studies have been able to link the condition to genetics.

Some of the most prominent conditions that can be associated with nystagmus in babies include:

When is nystagmus diagnosed in babies? Though infantile nystagmus cases are often considered congenital (present at birth), it is typically not diagnosed at the time of birth. More often, congenital nystagmus is diagnosed between 6 weeks and 6 months of age.

Depending on the degree of the symptoms and the age when they start showing, an eye doctor may recommend testing beyond a comprehensive eye exam, such as blood work or an MRI brain scan. This will help the doctor further investigate the cause of nystagmus, and the severity of any underlying cause that may be present.

SEE RELATED: How eye twitching may be a sign of a brain disorder

How is nystagmus treated in babies? Treatment may vary depending on the type of nystagmus that is diagnosed. If nystagmus is due to a refractive error, corrective lenses may be prescribed for your young child. Vision therapy also may be helpful.

If nystagmus occurs due to a serious underlying condition, treatment is primarily reserved for the said condition, and will vary accordingly.

Surgical treatment is possible under circumstances in which head tilting has severely impaired the child, or for other major conditions.

In any case, it is best to consult an eye care professional to confirm a diagnosis and determine what the best treatment options are for your child. Children should have their first comprehensive eye exam at 6 months of age, but if conditions such as nystagmus are present, vision may need to be evaluated sooner.