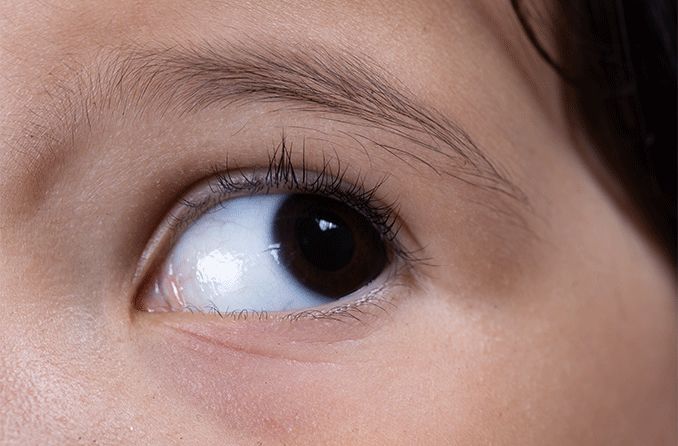 Aniridia is a rare congenital condition characterized by the partial or complete absence of the iris (the colored portion of the eye). This results in an abnormal or misshapen pupil that lacks the ability to dilate or constrict.

Individuals with aniridia often have light sensitivity and low visual acuity. They are also at a higher risk for developing more serious eye diseases throughout their lifetime.

In a normal eye, the pupil is a gap or opening in the center of the iris that allows light to enter the eye. For the brain to render a clear image, it’s important for the correct amount of light to be let in. Too much light can cause a glare, and too little light can make objects blurry or unclear.

Individuals with aniridia don’t have the iris to monitor how much light is coming into their eyes, which makes them extremely sensitive to light — a condition called photophobia.

Aniridia is bilateral, meaning it affects both eyes. However, the eyes may be affected differently (one eye may have partial aniridia while the other has complete).

It’s estimated that aniridia occurs in 1 in every 40,000 to 96,000 births in the U.S. The condition affects males and females equally with symptoms that are usually detected at birth.

SEE RELATED: Eye anatomy: A closer look at the parts of the eye

Iris coloboma is another congenital condition that is similar to aniridia. However, there are a few major differences that set the two conditions apart:

Aniridia is typically congenital, which means it develops during pregnancy and is present at birth. However, the condition can also be acquired, meaning it can develop later in life.

Congenital aniridia can be isolated, meaning it is the only symptom present, or one of several symptoms related to an underlying condition.

Many cases of isolated aniridia involve mutations in the PAX6 gene. This gene lays the groundwork for proteins to develop the eyes, brain, spinal cord and pancreas during pregnancy.

Most children born with isolated aniridia inherited the gene from a parent through an autosomal dominant pattern. In order for this to occur, one or both parents must have one copy of the altered gene in each cell. Even if the parents themselves do not have aniridia, the presence of the mutation is enough to cause the disorder in their children.

Though rare, it’s also possible for aniridia to happen spontaneously. This would mean the genetic mutation occurred on its own for no known reason.

SEE RELATED: Your infant's vision development: What to know

Acquired aniridia is typically caused by trauma to the eye or from ocular surgery. The iris has a consistency similar to tissue paper, which means it is extremely fragile.

The iris is connected to a round structure called the ciliary body that keeps the iris in place. If trauma or ocular surgery causes the iris to detach from the ciliary body, the iris can fall or droop — a condition called iridodialysis.

Aniridia is associated with several genetic conditions and is usually accompanied by other symptoms. The most common conditions where aniridia is seen include:

Other ocular defects where aniridia is often seen include:

Aniridia is fairly simple to detect, as the main symptom is clearly visible when it hasn’t been cosmetically corrected. Symptoms associated with aniridia are:

If aniridia is a part of a syndrome, other symptoms related to that syndrome will likely also be present.

There are a number of complications that can occur as a result of aniridia. Patients must closely monitor their eye and kidney health to ensure the following complications are kept at bay:

Most treatment for aniridia is designed to protect the eye, prevent complications and preserve sight.

Sunglasses for aniridia are often prescribed as a way to protect the eye and reduce glare. Prescription sunglasses can also be used to correct poor vision associated with aniridia.

Surgical treatment is available for complications of aniridia that include cataracts, glaucoma and retinal detachment. Certain medications may also effectively treat these conditions.

Contact lenses that are specifically designed for aniridia patients can be tinted to hide pupil abnormalities, reduce glare and improve vision.

Artificial iris implants were officially approved by the FDA in 2018. The irises are engineered out of thin silicone pieces and are colored and sized to accommodate each individual patient.

This procedure has its own set of risks and complications. It’s recommended that you discuss these with your eye doctor when considering treatment options.

When living with aniridia, it’s important to keep a close watch on your eye health and overall physical health. If your aniridia is part of a syndrome, it’s wise to understand the risks and complications that come with the condition and see a doctor if any problems arise.

For isolated aniridia, you should see your eye doctor if you:

READ MORE: Rare eye diseases: What causes them and how are they treated?

Iritis: Inflammation of the iris