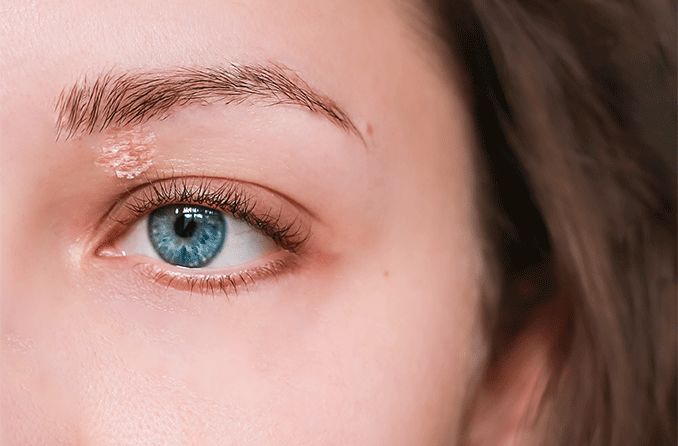 Eyelid psoriasis (pronounced “suh-RYE-uh-sis”) is a non-contagious autoimmune skin condition that causes overproduction of the body’s skin cells, leading to inflammation and thick, scaly patches around the eye area that can make the eyes feel irritated and swollen.

There is no clear cause for this psoriasis but it’s believed that genetics and immune system dysfunction are contributing factors. In addition to medications, there are several coping strategies and lifestyle choices that can help manage symptoms.

Psoriasis is an immune-mediated condition that affects more than 8 million people in the United States and 125 million globally, according to the National Psoriasis Foundation (NPF). It appears as reddish patches of skin and can include painful silvery scales that burn and itch.

When there is an imbalance in the immune system, extra skin cells are produced faster than normal. This causes the skin to thicken and become scaly (or develop plaques) in certain areas. It typically takes a month for skin cells to regenerate, but with psoriasis this process happens every three to four days.

Psoriasis usually affects the joints, scalp, elbows and knees but it can develop anywhere on the body, including the eyelids and around the eyes. Psoriasis affects women, men and children, and while symptoms often begin between ages 15 and 25, they can start at any age.

Psoriasis on the eyelid

According to the NPF, 50% of people with psoriasis experience it on their face, typically near the hairline, eyebrows, forehead or between the nose and upper lip. However, psoriasis around the eyes or on the eyelids is extremely rare.

In the few cases where psoriasis does affect the eye area, it can lead to eye dryness, inflammation, discomfort and possibly vision loss. If a buildup of skin patches becomes large enough, it can result in difficulty opening and closing the eyes.

Other symptoms of eyelid psoriasis may include:

Generally considered a disorder of the immune system, genetics can also play a role in psoriasis (though there may be no family history of the disease). Additionally, some triggers can cause symptoms to flare up or become more severe, including:

Working with a dermatologist and an eye doctor is important when creating a treatment plan for eyelid psoriasis, as conditions that affect the sensitive areas on the face and around the eyes should be managed carefully.

Eyelid psoriasis can be treated with the following methods:

These two skin conditions develop in different stages of life: Psoriasis usually starts around age 15, while eczema can begin in childhood and continue through adulthood with varying levels of severity. According to the National Eczema Organization (NEO), eczema is more common than psoriasis and affects over 31 million Americans.

Also like psoriasis, different types of eczema can appear in different areas of the body.

It's important to call an eye doctor if you notice any changes in your vision or think you might be experiencing symptoms of eyelid psoriasis. A dermatologist is also an excellent point of contact for assessment of psoriasis symptoms and questions about the condition.

Even when your vision seems perfect, it’s important to get an annual eye exam so your eye doctor can check for early warning signs of certain conditions and help protect your overall health.

Milia on your eyelid? What milia are and how to remove them